The Charles River White Geese and power plays of MIT, Harvard and the Cambridge City Council.

The Charles River White Geese and power plays of MIT, Harvard and the Cambridge City Council.

CAVEAT: This post was significantly amended on September 6 at 4:21 pm.

A. State attempts cleanup.  Cambridge City Council on Wrong Side.

(2). The legislature destroyed the state agency which owned the Charles River.

B. Heartless Abuse of the Most Valuable Tourist Attraction on the Charles River: A Very abbreviated list of outrages.

3. The refuge during the worst environmental attacks.

A. One decades long lie proven to be yet another lie.

B. Part of many massive destructive plans, the hidden reality.

5. Just one part of the accelerating outrages.

B. Historical Harvard Square being destroyed by upzoning which subsidizes Harvard’s Future Mass Pike (I90) Campus.

During the past month or so, the Charles River White Geese have lived through three heat waves and two drenchings from hurricanes which only had rain left.

Here they are soaking in shade during extreme heat.  The stones and dirt under them used to be lush ground vegetation until destroyed by the Massachusetts Department of Conservation and Recreation and its friends with support, assistance and NON STOP praise from the Cambridge City Council. 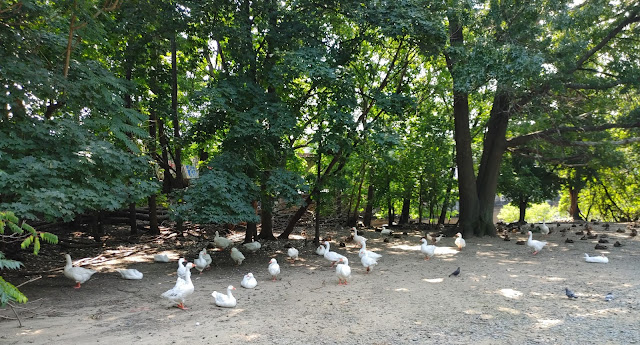 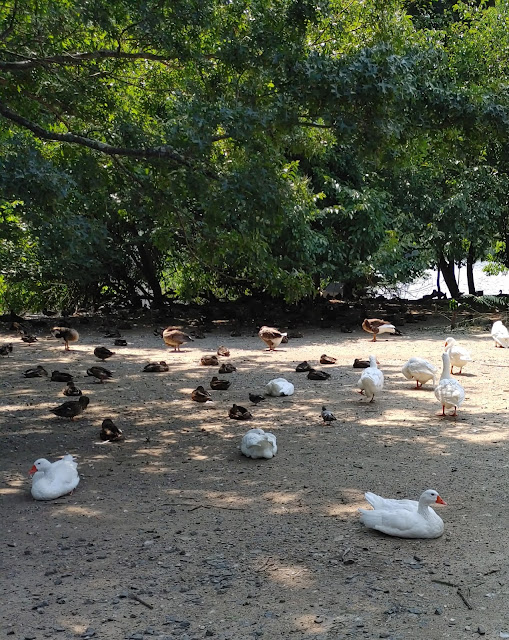 A. State attempts cleanup.  Cambridge City Council on Wrong Side.

The most significant ATTEMPTED change was not on the Charles River.  It was the very strong suggestion from three levels of court that the Cambridge City Council should fire the Cambridge City Manager for behavior succinctly described by the Trial Court Judge as “reprehensible” including extended QUOTATIONS from the testimony of City Manager Robert Healy.

Please see the Trial Judge’s Opinion in Monteiro v. Cambridge at http://charlesriverwhitegeeseblog.blogspot.com/2009/04/judge-issues-decision-denying.html.  And see the Appeals Court’s “non opinion” opinion at http://charlesriverwhitegeeseblog.blogspot.com/2011/08/appeals-court-decision-in-monteiro.html.  The Appeals Court panel refused to dignify the appeal by calling its very clear opinion an “opinion.”

The assistant promoted to City Manager personally managed the outrages on the Charles River during the 2000's and his staff, with his public expressions of praise, happily assisted the DCR (see below) in the later outrages.

The City Council sat on its hands during the destruction of hundreds of trees and animal habitat on the Charles River between the BU and Longfellow Bridges in accordance with the very accurate statement: “Silent during circumstances which call for outrages is support.”

My video on this issue, with some foretelling of subsequent outrages is posted at https://www.youtube.com/watch?v=pTplCCEJP7o.  The City Manager condemned in this video is the promoted assistant, not the current City Manager.

(2). The legislature destroyed the state agency which owned the Charles River.

The destructiveness of the Metropolitan District Commission was one of the stated reasons for its wiping out the MDC.  Unfortunately, the legislature did not keep GUILTY staff from transferring to the Department of Conservation and Recreation which received possession of the banks of the Charles.

The Department of Transportation has been the Adult in the Room in its dealings with the DCR and the City of Cambridge.  MassDOT now, with the initiative of a responsibly behaving City Council, should replace the DCR by vote of the legislature.

Any and all comments about MDC behavior in this communication do not recognize any difference between it and the DCR and accordingly use “DCR” for references to “MDC.”  There has been no meaningful difference that I am aware of.

B. Heartless Abuse of the Most Valuable Tourist Attraction on the Charles River: A Very abbreviated list of outrages.

During that period people came from any number of different places to admire them.

Their primary residence for most of the year was the playing fields of Magazine Beach.  They lived in the Destroyed Nesting Area for nesting and in the cove in front of the Wild Area for protection from bad weather.

They had a habitat of a mile of the Charles River adjacent to and on the Cambridge shore centered on the BU Bridge.

That habitat has been destroyed, reducing the habitat to the current pittance, through multiple actions by the DCR and Cambridge.

The DCR was so proud of the Charles River White Geese that it had traffic signs bragging about them.

That came to an abrupt end in the late ‘90's when the later Court condemned City Manager presented the DCR with plans for the Charles.  When I got “her” plans for the “improvements” from the head of DCR “planning,” she pointed out to me the tiny difference between “her plans” and the plans first announced by one of the usual fake protective groups on behalf of the Cambridge City Manager in 1996.

For one lovely homage to the Charles River White Geese see “White Geese of Cambridge” by Ernie Sarno, November 2009 at https://www.youtube.com/watch?v=C2-xSIYrB5o.  Mr. Sarno spent a night with them and was wakened near dawn for the gaggle to go to feed on the luscious grass across from the neighboring Hyatt Regency Hotel.  The DCR with Cambridge assistance destroyed every tree across from the Hyatt Regency as part of the January 2016 outrages.

The DCR with Cambridge leadership POISONED the grass at the Magazine Beach playing fields and walled the playing fields off from the Charles River taking all their food from them.

Here are a photo of the Charles River White Geese, on September 4, 2008, learning that they were being starved, and a photo of the Starvation Wall from the drone tapes, “From Cambridge to Boston with the DJ Inspire 1 Drone footage,” https://www.youtube.com/watch?v=sN-OmMzvHhw, at minute 10.26.

Recent City Council votes, kept as secret as possible, have made the starvation tactics more effective.

Additionally, a friend of the Cambridge City Council using DCR / Trump moneys and DCR “volunteers” blocked the drainage pits (the L shaped vegetation area) created to keep the poisons out of the Charles and rerouted those poisons INTO THE CHARLES creating an algae blight.  The Cambridge City Council has helped with funds for a boondoggle to “clean up” the algae blight WITHOUT DOING ANYTHING TO CORRECT THE BLOCKING OF THE DRAINAGE.  And, naturally, praising instead of condemning the DCR for creating the outrage through the City Council’s friend.

3. The refuge during the worst environmental attacks.

Source: “From Cambridge to Boston with the DJ Inspire 1 Drone footage,” https://www.youtube.com/watch?v=sN-OmMzvHhw, minute 9.10. 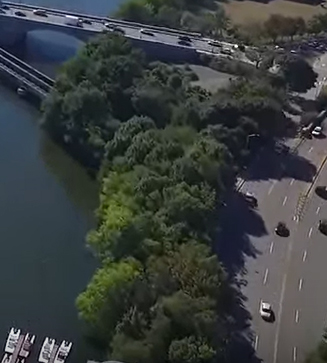 This is the wild area (vertical with curve to the left) east of the Destroyed Nesting Area (between the Wild Area and the BU Bridge, at top).

The curve is a protected cove to which the Charles River White Geese repair during the worst of days.

A. One decades long lie proven to be yet another lie.

The Wild Area, like so much of natural value in and near Cambridge, MA, USA, is under attack by the Cambridge City Council and the DCR.

One of the lies is that the two are fighting to destroy the Wild Area for a subway line which involves moving a commuter rail station from a mile away across from Fenway Park to about half a mile away near the heart of Boston University.  This is Landsdowne (formerly Yawkey) Station.

The biggest problem with that lie is that responsible governmental entities have rejected the lies as responsible entities continue to reject so many other outrages.

Here is that supposedly being moved commuter rail station UNDER A PROJECT WHICH WILL NOT MOVE and proves that particular lie to be just another lie. 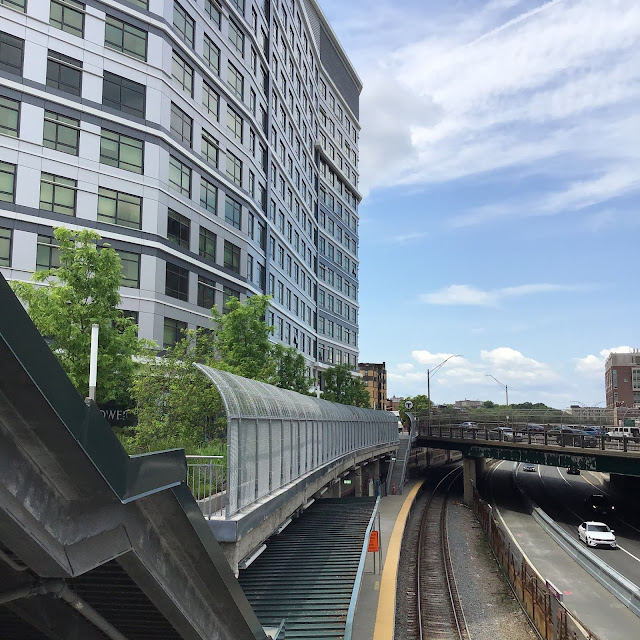 B. Part of many massive destructive plans, the hidden reality.

Below is the Grand Junction railroad bridge which crosses the Charles under the B.U. Bridge and extends between the Wild Area and the Destroyed Nesting Area.  It was proven to be expandable so that it could hold an off ramp from I90 (Mass. Pike) on the Boston side to give Massachusetts Institute of Technology on the Cambridge side its own I90 exit.  There are, oh so,  many alternate “projects” which NEVER mention reality.  Reality is an update of the “Inner Belt” which a lot of Cantabridgians are proud of destroying FIFTY years ago.

This photo was taken at the same time as the above photos of the Charles River White Geese IN THE SHADOW OF THIS EXPANDABLE Railroad Bridge. 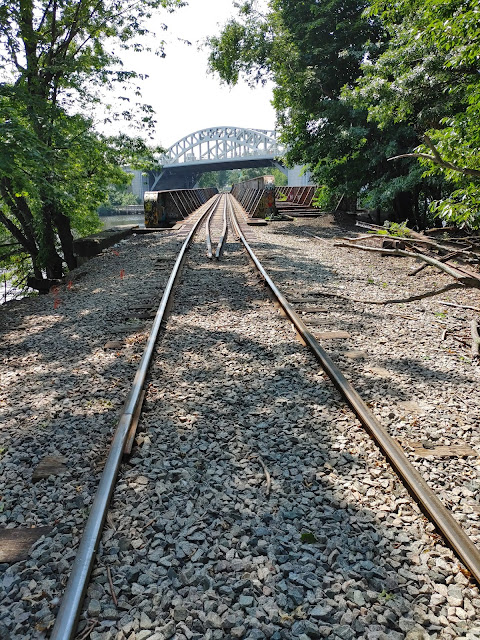 And here, from the same drone stills,  minute 4.40, is the carefully hidden reality. 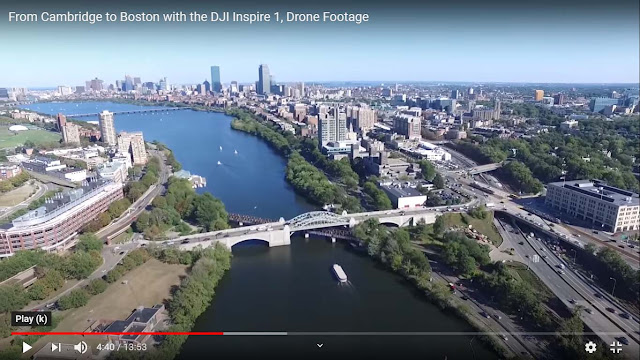 The bridge is the BU Bridge.  Under it is the Grand Junction railroad bridge which extends both to the upper left and the middle right.  On the left is the Destroyed Nesting Area.  On the right is I90 going under Commonwealth Avenue, Boston and the BU Bridge.

This and so many other plans and fraudulent “protections” which require a book to present are part of the accelerating outrage.

5. Just one part of the accelerating outrages.

A unanimous Cambridge City Council has voted an upzoning for massive destruction in Harvard Square.  Part of that destruction pays Harvard University to move part of its Harvard Square campus to Boston’s Allston neighborhood.  Here is a cropped still from that same drone video, minute 10.02, showing  Harvard’s new campus in Allston before construction of the relocation of so many parts of Harvard’s empire.

The upper part of this wasteland is about a block or so from Allston Village which could become a replacement tourist trap for Harvard Square.  WITH ZONING SUBSIDIES IN CAMBRIDGE FROM THE CAMBRIDGE CITY COUNCIL.

The Massachusetts Department of Transportation  is studying the future of this area as part of the I90 Rebuild Project.  This is the western end of the study.  The eastern extreme is the targeted location of the beginning of the long standing plans for creating the Massachusetts Institute of Technology’s updated Urban Ring / private off ramp to MIT.  See above in section 4.B.

B. Historical Harvard Square being destroyed by upzoning which subsidizes Harvard’s Future Mass Pike (I90) Campus.

Here is just part of what all nine Cambridge City Councilors voted to encourage being destroyed in Harvard Square.

Dormitories which could be converted to retail and students  moved to Allston are not far from these historical buildings. 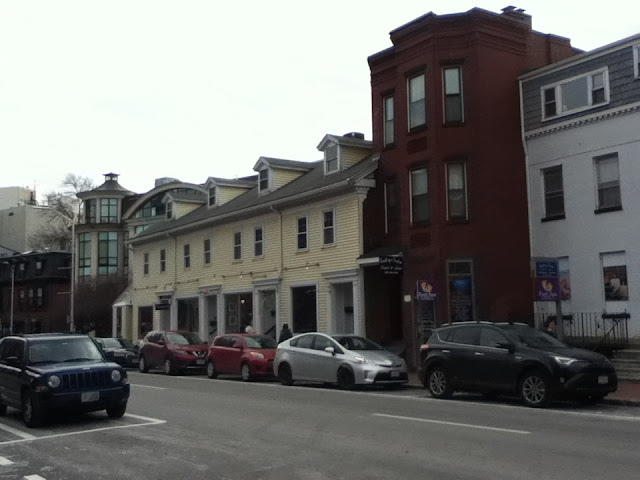 City Council election is coming up.

People who oppose destruction supported by NINE city councilors have the power to vote for every candidate on the City Council ballot and put all nine City Councilors at the bottom of the ballot.  By voting this way, the voter says every incumbent City Councilor can only get that vote if every non incumbent candidate cannot use the vote.

The City Council is also seeking votes to change the City Charter which would give those destructive people more power.

Of course this destructive City Council should not be given more power.

It could be considered prettier.