1. Introduction.
2. My Comments, the secret plans, succinctly.
3. Nice response.
A. Person 1.
B. Your Editor.
4. How do things fit in?
A. Person 2.
B. Your editor.
C. Satellite / Aerial Photo.
5. Person parroting a standard Machine con.
A. Person 3.
B. Your Editor.
6. Harvard’s Medical School Relocation.

Yesterday, October 16, 2012, the Cambridgeport listserve had a lot of discussion concerning the condition of the newly reconstructed pedestrian bridge connecting the playing fields to the neighborhood over Memorial Drive.

This is the sort of thing the Machine loves to discuss. It gives the impression that they are in favor of responsible behavior at Magazine Beach without the substance.

I commented trying to put things in perspective and got three responses, one nice, one thought provoking, and one passing on the standard nonsense from the machine. The listserve only allows one communication per day. So I could not respond on the listserve. Thus I responded to each writer and, copied the previous recipients on subsequent responses.

I can still only pass one response to the listserve and, if I try more than one, will run up against the rule against longe communications.

So here is the exchange, deleting the names of the other folks.

I am adding one comment at the end that I sort of regretted not including in the second very long response.

There is a lot of related matter on the blog. I do not know if I will add links or not.

2. My Comments, the secret plans, succinctly.

The reason for keeping out the traffic light is the same reason, never stated, for destroying the parking lot at the light.

There is a reason. The same as not allowing the traffic light.

Thanks for the long view, as it is easy to form opinions without the history or full impact of the actions of the disjointed community.

As tax payer's who contributes to the $450 million yearly budget with over a billion dollars in debt city - I want to remind folks that we have 9 city councilor's making over $70,000 a year with full benefits and pensions who job it is to keep us informed and to build a strong community a city manager who makes almost as much as President Obama and three times what Gov. Dpatrick makes. We have a Community Maintenance and Development Budget of close to $100 million dollars and I see less trees, less maintenance and very little community development - not buildings but good ole consensus among neighborhoods.

It is amazing how many different things come together in that part of the Charles River. And how much discussion is prevented.

That is interesting: I have kept up somewhat on the Grand Junction issues over the years, including the Mass Pike exit connecting to the railroad bridge modified for vehicular use, but had not heard that it is being actively pursued. Do you know what the current plans are for the vehicles after crossing the river, other than to access Memorial Drive? Is any kind of road along the overall "Inner Belt" route being seriously reconsidered for example? Also, can you describe the modifications to the Mass Pike that facilitate accessing the railroad bridge?

That does help explain the planned destruction of the semi-circle parking drive next to the pool. Removing the drive is not in the best interest of Magazine Beach, the neighborhood, or the City; as it serves a legacy of weekend picnicking families, and will further support current efforts to further activate Magazine Beach and make it more of a destination along the Charles River park. I do not agree with the idea that the parking lot on the other side of the pool (next to the boathouse) serves the same purpose; the convenience of the semi-circle drive greatly increases the appeal of using the picnic area, my guess is it is a 'tipping point' difference between the two lots.

Thank you for your astute comments. Because of limits of one posting per day, I cannot copy to the listserve.

There are lots of items of evidence.

Hundreds of trees are proposed to be destroyed on Memorial Drive to straighten it out. Among other things, the excellent grove of trees at the split would be decimated along with many major trees on the median. The DCR tried to get Obama moneys for this destruction lying that all the trees were diseased. The papers they filed with Cambridge proved that to be a lie. The trees they, and Cambridge, and MIT, want destroyed are all excellent. The prior phase of destruction destroyed the bad trees.

The work in the connector street from Granite to Waverly, the Waverly connector, had vegetation plans included but not yet implemented. The tree plantings were very extensive, but had gaps to allow connection from a new highway on the railroad right of way so that traffic could travel from the Grand Junction off ramp through the Waverly Connector to Memorial Drive and the BU Bridge. There has been a rendering showing a ramp from the Rail Bridge northbound through the woods east of the grand junction to Memorial Drive east.

The DCR's detailed tree destruction plans for the Memorial Drive destruction show a lot of existing trees, but show, I believe, one tree on that hillside.

The various "bike paths" and the bus highway plans associated with the Urban Ring bus phase join in the building up of the area to assist an eventual off ramp. The City Manager's refusal to recognize the existence of one of the Urban Ring rail plans exactly fits determination to build up this area. I provided the City Council with a detailed analysis of this continuing lie, and have posted it on the Charles River White Geese blog at http://charlesriverwhitegeeseblog.blogspot.com/2012/10/the-grand-junction-railroad-subway.html. That will link to the official copy.
I would be interested in seeing exactly what the numbers are on that new overpass as opposed to the one which was destroyed, to see how that fits in.

Ed. This aerial / satellite shot is from an ENF in 2006 with my markings. 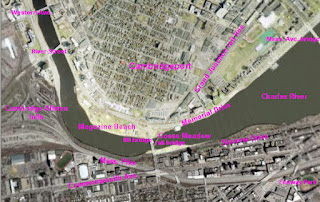 Neither Magazine Beach nor the pedestrian bridge are paid for out of city funds, they are state controlled entities. Hence, how Cambridge chooses to allocate its resources has nothing whatsoever to do with what happens there.

Cannot copy to the list serve because of the one a day limit.

Succinctly, you are talking nonsense. The DCR does nothing in Cambridge which is not fully coordinated with Cambridge. They shuffle funds back and forth as is politically convenient in producing the lie that the DCR is the bad guy and poor dear Cambridge means so well.

The 13 years of destruction at Magazine Beach and the Nesting Area was juggled in exactly that manner.

An excellent example was a comment by MIT's chief environmental destroyer in an MIT planning meeting.

First he supported the mass tree destruction on Memorial Drive. He may have tossed in the cynical "protection" used by the "Magazine Beach protectors". They do not have the money yet. How dare you try to beat us when you can still keep us from getting the money (English translation).

In the next breath, he praised the leader of this supposed neighborhood protective group for his group's initiatives at Magazine Beach. Damning with praise.

But they do love to praise each other.

Note in the satellite shot above that the now Harvard owned rail yards are, for all practical purposes, directly across the Charles River from Magazine Beach.

As part of getting transportation for the moving of its Medical School to the railroad track area, Harvard has proposed “deep bore” construction of a subway spur from Harvard Station through the Medical School Area to a “Bus” Tunnel being proposed as part of Urban Ring “Bus” planning in support of the Harvard / Longwood Medical Area.

This would allow students at the relocated Harvard Medical School direct contact between the hospitals where they are being trained and the formal academic buildings. Harvard Medical School, in these long term projections, is the logical location for expansion of Harvard / Longwood Hospitals.
Posted by Friends of the White Geese at 9:03 AM