1. Comment from Phil Barber
2. Phil Barber’s experience.
3. The Rest of Us.

I have, on October 28, received the following from Phil Barber in response to the email version of my report on the Cambridge Conservation Commission tour of Magazine Beach at:  http://charlesriverwhitegeeseblog.blogspot.com/2016/10/charles-river-spot-report-tour-of.html.

Phil’s knowledge and dedication is clearly the best.

Phil has been visiting and recording Magazine Beach since the 1980's.

Phil has recorded Magazine Beach and the Charles River White Geese at http://www.historicpages.com/geese/wg.htm, with photos dating back to the 1980's.  Please check them.  You will like them.

Here my favorite of his photos, from the late 2000s, the Charles River White Ducks. 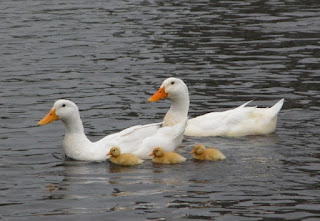 He predates the rest of us by decades.

I first learned of the plans to destroy Magazine Beach from the announcement of one of the fake groups that they were working to “improve,” i.e. destroy, Magazine Beach in 1996.

They presented destruction plans from the Cambridge City Manager in 1997.

These plans achieved some terrible things in the 2000s, and are being made worse by the matters I am currently reporting.

For years, all I could get from anybody was that “they would never stoop so low.”

In 1999, I obtained the then plans from the now legislature destroyed Metropolitan District Commission.

The MDC planning chief, on providing me the copy, pointed out the small areas where her plans deviated from those created by the Cambridge City Manager for the fake group.

Those plans ARE THE BASIS FOR THE CURRENT OUTRAGE.

Starting in March 2000, when the Charles River White Geese returned to their nesting area, Friends of the White Geese publicly organized.

In those early days, we had a two person core group.  We created Friends of the White Geese and obtained Attorney General recognition.  We each met the people who were most involved.

Reen LittleBrook, a Native American was, at that time the best friend to the Charles River White Geese.  He provided them full friendship and assistance.  He treated their medical problems with traditional Native American remedies.

LittleBrook, a few years later, got a bicycle.  A few days after that he got into a traffic accident and wound up in the hospital and rehab for months.  He, to his regret, is no longer physically able to return to aiding the Charles River White Geese.

First my cocreator took over the feeding.  Then we and friends created The Charles River Urban Wilds Initiative as a federally tax exempt organization to take over the duties LittleBrook did.  That entity is so far separate from the Friends of the White Geese that I really do not have a good contact for them except to look for them at the Destroyed Nesting Area.

While, clearly, LittleBrook and the Charles River Urban Wilds Initiative have been the people closest to the Charles River White Geese since about 1996 or a bit earlier, and I and others have been doing the political activity since 1999, Phil Barber predates us by decades.