To Cambridge, MA, USA: Do not destroy Magazine Beach or its Hill

To Cambridge, MA, USA: Do not destroy Magazine Beach or its Hill.

I. Introduction:
II. Letter.
1. Introduction.
2. Photos of the part of the outrage on the Magazine Beach hill facing Memorial Drive and the residential neighborhood.
a. Photos.
b. Defective Destruction Plan.
c. More detailed analysis.
3. Phil Barber tells the truth, magnificent grove overhanging playing fields, destruction of Little Guys Parking lot.
4. Proposed Solution.
5. Transmittal of DVD documenting the destruction of hundreds of trees east of this site by Cambridge and the DCR.
6. Conclusion.

We are doing a series of letters to the key figures in the Cambridge government on the latest attempts to increase destruction on the Charles River.  Cambridge has had a destructive, misleading three person City Manager Machine for the last 42 years.  A new City Manager has been selected but has yet to take office.  To put it nicely, there has been a lot of lying through omission on environmentally destructive initiatives under the Cambridge City Manager machine.   Environmentally, the city government created by that City Manager Machine is standing on a House of Cards.  False claims of environmentalism faced with reality could topple the House of Cards.

We would much rather communicate and give the City Council a chance to resemble its non stop claims of environmental sainthood.  The issue is the ongoing environmental destruction on the Charles River and elsewhere where this destructive city government has impact.  The pending, and surprisingly delayed, appointment  as City Manager of a person who not been in the middle of the outrage is a positive sign.

A major part reason for this series is to put on record that the Government of the City of Cambridge has been made aware of the next impending outrage on the Charles River.  It stems out of years of work with the City Manager Machine in the middle.  The 42 year record is one which an not be ignored.  It is a lot more difficult to lie about your record when your record is clearly documented, and hopefully, there will not be more things to lie about.

Our latest letter was hand delivered to the Cambridge City Clerk on November 1, 2016 so that it could be made part of the City Council Agenda on November 7, 2016.

On October 4, and 26, 2016, I hand delivered my previous letters on this topic to the Cambridge City Council, care of the City Clerk.  I hope that, by the time I deliver this follow up, City Manager DePasquale will be in office, so I can deliver the October 4 and 26, 2016 letters with this one. [ed: He apparently was not yet in office.]

2. Photos of the part of the outrage on the Magazine Beach hill facing Memorial Drive and the residential neighborhood.

Here is another very major view proposed to for all practical purposes be destroyed on Memorial Drive, the view opposite Magazine Street.  Photos move from west to east. 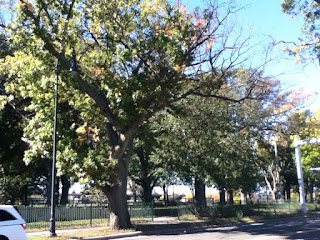 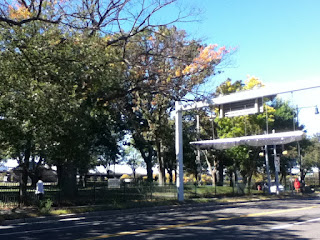 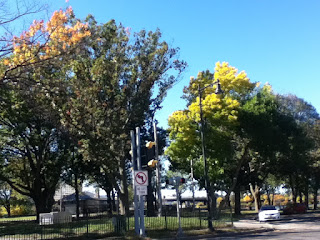 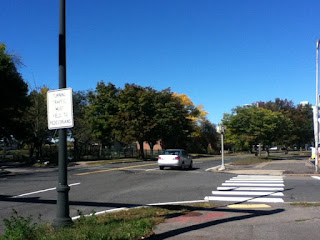 Here is the relevant part of the destruction plans submitted by the Department of Conservation and Recreation.  I realize the plans are deficient in that they UNDERSTATE destruction, including clearly fraudulent understatements.

The magnificent tree in the first photo shows for destruction in this plan exerpt under the word “clearly” in the text.  The tree to its left in the photo, right in the plan is being destroyed in the plan.  EVERY TREE BUT THREE IS DESTROYED FROM THE STREET TREE TO THE BACK OF THE proposed to be destroyed LITTLE GUY’S PARKING LOT (the semi-circular road).  Note as well, on the right on this plan, two more trees south of the pedestrian over pass being destroyed, JUST IN THIS PARTIAL PLAN.

Total tree destruction on the hill / bathhouse area is THIRTY, which has been admitted by the Cheerleaders.  This FRAUDULENT PLAN, as presented in my last letter, without the cropping, SAYS TWENTY-THREE.

A FAKE SHOW WAS PRESENTED IN THE CITY HALL ANNEX TOTALLY LYING THROUGH OMISSION ABOUT ALL THIS DESTRUCTION, ANOTHER EXAMPLE OF THE LACK OF FITNESS OF THE 42 YEAR MANAGER MACHINE, which, hopefully is dead.  This presentation with its lies of omission was compatible with others in the 42 year period.

By contrast, here is an email from the top expert on Magazine Beach that I am aware of.  Phil Barber.

Here again, is the photo from the my October 4 letter, and the clearly fraudulent part of the plan which says THREE rather than TEN trees are being destroyed.

A major difference between HONEST, RESPONSIBLE people such as Phil and the irresponsible DCR / Cambridge City Manager machine is that Phil clearly states that some of the trees in the grove are dead.  THE RESPONSIBLE TREATMENT, as proposed by Phil, IS TO CHOP DOWN THE DEAD TREES.  THE DCR / CITY MANAGER TREATMENT IS TO DESTROY EVERYTHING, AND THEN DESTROY, DESTROY, DESTROY SOME MORE, AND LIE ABOUT THEIR OUTRAGE through that fake show in the Annex. 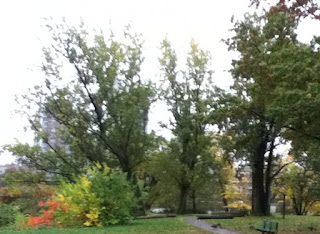 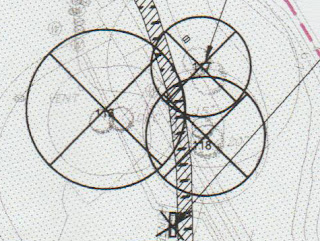 Direction of view is opposite between the plan and the photo.  In the plan, the playing fields are on the right.  In the photo, they are on the left.  The pathway shows on both.

Myself, I am not an expert.  I am simply trying to compare deliberate false statements with other documentation I can get.

An excellent example of Phil Barber’s more than thirty year experience is the photo essay he has posted about the Charles River White Geese dating back to the 1980s at http://www.historicpages.com/geese/wg.htm.

One is through requests.  This makes sense, but has next to no value particularly since the Metropolitan District Commission graduates in the DCR can and have gone forward with almost no warning.  Plus they have played games with the legislature.  The legislature allowed them to destroy between the BU and Longfellow Bridge years after their approvals expired, almost certainly being lied to by omission about the true impact of what they were doing.

Claims of “lack of jurisdiction” in Cambridge government are silly.  Very clearly, the DCR is closer than the many governments of the world the Cambridge City Council frequently addresses; the destruction is occurring in the City of Cambridge;  Cambridge has funded destruction on the Charles River; Cambridge’s Development Department is consulted AND HAS BEEN CONSULTED on these outrages, and Cambridge has Home Rule rights over actions within the community.  Any claim of lack of jurisdiction is nonsense.

Implement the wishes of the legislature when it destroyed the Metropolitan District Commission.  The legislature tried to protect the Charles from the destructiveness of the MDC bureaucrats.  Obtain legislation to get rid of the DCR on the Charles River in Cambridge, transferring funds and jurisdiction to the Massachusetts Department of Transportation.  MassDOT has been the adult in the room in Charles River matters in which the DCR and the Cambridge City Manager Machine have been very destructive children.  Home rule legislation is Cambridge’s right.

The smart legislative option would be initiate transfer action through vote of the Cambridge City Council and action of Cambridge’s legislative team with proper rearrangement of funding from the DCR to MassDOT.  FURTHER TRANSFER OF MANAGERS AND / OR PLANNERS, this time to MassDOT should be FORBIDDEN.  The existing outrages are by Metropolitan District Commission functionaries who took their outrages with them to the DCR when the legislature properly destroyed the MDC.  The MDC alumni, have since destroyed, destroyed, destroyed in the name of the DCR.

In the interim, Cambridge should exercise the right OF CONTROL OF MAGAZINE BEACH transferred to Cambridge in the agreement for destruction of the 2000s.  The Chief MDC / DCR destructive bureaucrat has publicly admitted the willingness of the DCR to respect the transfer agreement by which the MDC got money for the 2000s destruction.  That destruction was managed by Rossi as top assistant to then City Manager Healy.

This starvation wall is targeted at the Charles River White Geese.  It was promised to be a “lawn to the river.”

Poison use on the Charles River is a love of the DCR/MDC bureaucrats.  It is always kept secret in the “planning” process.  The annual algae infestation of the Charles dates back to the MDC dumping poisons on Ebersol Field next to the Massachusetts General Hospital marked “Do not use near water.”  Less destructive poisons were not working.  The next day, the Charles River was dead from Boston Harbor to the Mass. Ave. Bridge.  It comes back every year.

5. Transmittal of DVD documenting the destruction of hundreds of trees east of this site by Cambridge and the DCR.

I should have provided the City Council with individual copies.  Ten copies are attached to the City Council copy of this communication, one for each City Councilor, one for file.  Should members of the Cambridge City Council prefer, the identical video is available at https://www.youtube.com/watch?v=pTplCCEJP7o.

End this outrage.  End it now.  Thank you in advance for your responsible behavior.

Enclosures: As stated
Posted by Friends of the White Geese at 3:13 PM