I. Introduction.
II. Letter of Notice addressed to Cambridge City Manager and City Council.
III. Official Report, Prior Reports in this Series.

This is Part 7 of a series placing on the internet record, our attempts at preventing YET MORE DESTRUCTION on the Charles River by the Massachusetts Department of Conservation and Recreation, by the City of Cambridge, MA, and by their cheerleaders.  Check the last section of this report for links to referenced documents which are not directly attached to the reference.

(1) They preceded the vote with a rally for themselves on the steps of Cambridge City Hall, deifying themselves for their environmental sainthood, and

(2) They gave the impression that all they, and their accomplices were doing is destroying “dead and dying” trees.  The introduction to our letter wiped out the fraudulent word game which is the source of this false claim, and we presented photos of EVERY tree in the parklands of which they had voted to subsidize the destruction.

We have been interrupted in our presentation of this outrage because the destruction has started.  “Somebody” has destroyed a massive tree and filled in the hole.  The massive tree is part of part 4 of this report, published a few days ago.  It seems reasonable to assumed that the “somebody” was the DCR.

A photo of the destroyed tree taken from the report is provided below in section II.

Here is a DCR map of  Magazine Beach.  The destroyed tree was close to the bottom arrow of the double arrow graphic.

RE: Beginning of destruction of 54 Mostly Excellent Trees at Magazine Beach.  Communication 10 in a series

This follows on my letter of June 6, 2017 and on all of the references therein.

On April 24, 2017, a lot of members of the Cambridge City Council conducted a rally on the front steps of City Hall, claiming to be environmental saints.  The City Council, in its first order, based on a key falsehood, then proceeded to support the destruction of 54 mostly excellent trees, the continuation and expansion of the use of poisons on the banks of the Charles River, the continuation of the bizarre wall of introduction vegetation blocking off the Charles River, and the continuation of Cambridge and the DCR’s heartless animal abuse, plus set the stages for a whole bunch of other bad stuff.

The first destruction has occurred.  This one was probably a “dead and dying tree” as opposed to the fraudulent claims which targeted the 54 MOSTLY EXCELLENT trees targeted in order 1 of April 24, 2017.

Order 1 was based on the fraudulent use of words which gave the lying impression that the 54 doomed and mostly excellent trees were anything but.

You may refresh your memory of what you voted for by reviewing Cambridge records, my letter of June 6, 2017, posted at http://cambridgema.iqm2.com/Citizens/FileOpen.aspx?Type=1&ID=1815&Inline=True, pages 198 to 249.

The vote was based on fraud, the clear and false implication that 54 mostly excellent trees were “dead and dying,” based on words which were a false expansion of skillful fraud by the DCR as demonstrated in my letter.

The reprehensible MDC “planners” took their irresponsible plans to the Department of Conservation and Recreation.  They and the CDD and the Cambridge City Council are proceeding to implement those irresponsible plans.  Hundreds of MOSTLY EXCELLENT trees have already been destroyed on the Charles River, as demonstrated in my videos at https://www.youtube.com/watch?v=pTplCCEJP7o, and https://youtu.be/dWyCdcWMuAA.

Order 1 of April 22, 2017 seeks the destruction of an additional 54 MOSTLY EXCELLENT trees.  One has already been destroyed.

Behave in a manner consistent with the proclamations of environmental sainthood on the steps of City Hall on April 24, 2017.

Prevent any and all alternate sources of funding for this and for ALL SIMILAR OR RELATED outrages, including but not limited to actions of the legislature.

Reverse the destruction of the 2000s by Cambridge and the DCR / MDC.

[Ed.   Details on the Davis communication have been posted in two parts.

[(1) Letter to the Secretary / CEO of the Massachusetts Department of Transportation, posted at http://charlesriverwhitegeeseblog.blogspot.com/2017/06/charles-river-con-game-fights-for.html; and

[(2) supporting letter attached to the MassDOT letter which in turn was presented to the Cambridge City Manager as a welcome to his new appointment.  The letter briefly went into Cambridge’s fake “protective group” system as he had just been exposed to it, and, as an example of reality in Cambridge, the letter gave a glaring and readily provable example of malfeasance in office by his new Cambridge Development Department over a period of 21 years plus, posted at http://charlesriverwhitegeeseblog.blogspot.com/2017/06/charles-river-trust-cambridge-ma-usas.html.]

Give the DCR’s powers on the Charles River to the Department of Transportation which has split the former MDC powers with the DCR since the MDC was properly destroyed.

MassDOT is not perfect.  The DCR and “planners” of the CDD approach being perfect from the wrong direction.

Hopefully, City Manager DePasquale will clean up the outrages remaining from the preceding 42 years of three destructive City Managers by severely pruning the destructiveness of the CDD, which fits hand in glove with the reprehensible DCR / MDC.

In the meantime, here is a photo of the first tree to be destroyed as part of the very terrible destruction of these 54 MOSTLY EXCELLENT TREES on the Charles River IN ADDITION TO THE HUNDREDS ALREADY DESTROYED. 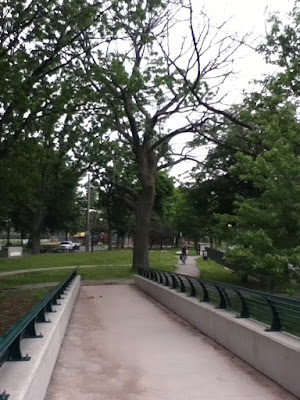 One less supposed justification for this outrageous destruction.

This photo is taken from my letter of June 6.

III. Official Report, Prior Reports in this Series.

The official and complete Cambridge, MA, USA, City Council record of the letter to them detailing the destruction they supported by that order is posted by the Cambridge City Clerk at http://cambridgema.iqm2.com/Citizens/FileOpen.aspx?Type=1&ID=1815&Inline=True, pages 198 to 249.  It is part of a very large file and takes some time to load.

Posted by Friends of the White Geese at 3:52 PM