I90 Rebuild Moves Forward on Charles River in spite of pols.

I90 Rebuild Moves Forward on Charles River in spite of pols.

Last night, October 20, 2020, the Massachusetts Department of Transportation presented a virtual show of the status of the work on rebuilding Interstate 90 (Mass. Pike) across from the Magazine Beach Recreation Area.

This has been the usual situation over there.  MassDOT has a raised highway which is running a million dollars a year to keep from falling down, and MassDOT is trying to go forward with construction.  At the same time, destructive entities are trying to sneak in very major environmental harm to Cambridge WHICH HAS BEEN REJECTED WHEN MEANINGFULLY PRESENTED.

Here are drone shots which are are currently accurate although taken a few years ago.

The main part of the project is an abandoned rail yard which is combined with a confusing combination of off ramps.

Here is a still from From Cambridge to Boston with the DJ Inspire 1 Drone footage, https://www.youtube.com/watch?v=sN-OmMzvHhw,  minute 2.33.  It shows the main work area, at the top.  Magazine Beach is at the bottom right.  This citation without the minute designation will be referred to as Drone 1. 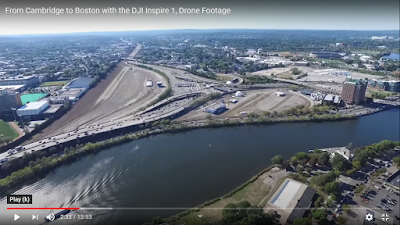 The disposition of this area is pretty much settled.  I had a major impact on it.

Here is the big problem area now, from “Flying Along the Charles River, From “BU and MIT to Harvard, DJI Inspire 1 Pro Drone Footage”, https://www.youtube.com/watch?v=tlFfZHeMIpI, minute 0:36.  Without the minute citation, I will refer to this as Drone 2.

The BIG building is a Boston University dorm.  To its left is I90 (Mass. Pike).  Then is the boulevard on the Boston Side of the Charles River, Soldiers Field Road, followed by the Charles River, a glimpse of the Magazine Beach playing fields and the Massachusetts Water Resources Authority pollution controlled plant. 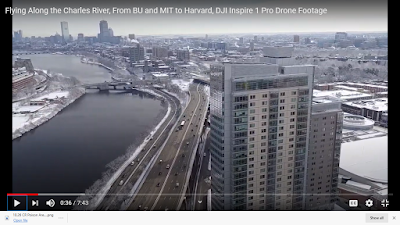 The view turns.  On the left is the Magazine Beach playing fields.  This view is at minute 0:38. 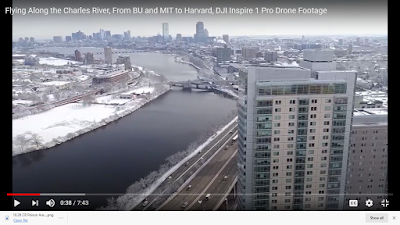 Going back to Drone 1, from minute 4.40, here is a closeup of the BU Bridge / Grand Junction Bridge / Destroyed Nesting Area.  The angle is more overhead.  The thick trees first blocking the view of the railroad are in the Destroyed Nesting Area.  The trees beyond the railroad are in the Wild Area.  The building beyond the Wild Area is BU’s Cambridge Boat House.  Following the railroad tracks to the far left middle, they can be seeond a large Harvard building.  Above that track is a major part of the Massachusetts Institute of Technology campus, plus some non college buildings below the tallest spire, which is an MIT dorm. 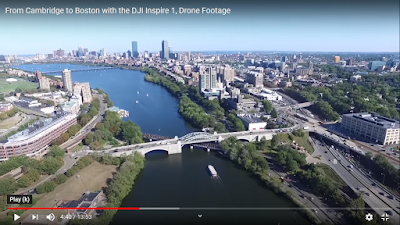 The Grand Junction is key to the dirty tricks which Cambridge entities are trying to sneak into the I90 plans.  They are sneaking in major environmental harm.  One of the hopefully losing I90 plans has shown destruction of the Wild Area as part of vast increase in use of the Grand Junction which they could not get sneaked in through honest above board attempts.  “Incidental” to a whole bunch of outrages, as usual, would be significant harm to the Destroyed Nesting Area of the Charles River White Geese, including nesting areas.

On the Boston side, the plan apparently blessed by the Cambridge City Council would, in addition to the destruction along the Grand Junction Railroad, include a new pedestrian / bike highway on STILTS building up above 22 feet of the Charles River with major reconstruction of the river bank.

I will not go into the various options and great detail of the I90 plans.  A few months ago I reported on the MassDOT head’s announcement of a major modification in her department’s plan which is one of the three alternatives being considered to do the dirty stuff the Cambridge destroyers have been fighting for.  This new passenger service has been found by MassDOT in the above board planning TO BE USELESS EXCEPT TO ENTITIES IN KENDALL SQUARE CAMBRIDGE (much further to the left on that track).  Entities .benefitting, of course, include MIT.

The MassDOT proposal would deny the massive increase to the Grand Junction from I90 while allowing a comparable rebuilding of the existing pedestrian / bike highway in Boston in a responsible manner.  Very clearly through the YEARS of study, MassDOT has insisted the I90 rebuild only impacts Boston.  Very clearly the friends of the Cambridge destroyers have been fighting to turn the BOSTON project into one destructive to Cambridge.  The version destructive to the Charles is an ARCHITECT GROUP’S “lovely” idea.

The alternatives to the I90 work INCLUDING THE MASSDOT CHANGE, the Modified Highway Viaduct, are up for comment now, ending October 30, 2020, comments to i90Allston@state.ma.us.

The state’s compilation of materials on the “Allston Multimodal Project” are allegedly findable through https://www.mass.gov/info-details/about-the-allston-multimodal-project.

Afraid I have repeatedly tried to find the exact plans through public channels.  It is always an unending nightmare.

I have spent several months trying to write a detailed and VERY LONG analysis.  Afraid I do not have the time right now, before the October 30, 2020 comment due date this time.

Phil Barber has passed on to me a Boston Globe report from October 6 which was in an email to him.

According to the Boston Globe, Boston University is offering use of some of its land for the rebuild.  The report is prior to the presentation above, but was not mentioned in the presentation.

The Globe report quoted from Boston University but BU’s offer was not specific as to the amount of land.

BU hopes the land from its campus would provide enough room to move construction work inland from the river while squeezing in the eight-lane turnpike, four-lane Soldiers Field Road, two adjacent rail lines, and a riverfront recreational path - all at grade level.

Note that the quotation DOES NOT MENTION access changes to the Grand Junction in Cambridge, something which MassDOT has repeatedly fought against..

Here is a crop provided in one MassDOT slide of the relevant portion of a cross-section of the project from the ARCHITECTS GROUP with modifications already.  This slide is looking eastward, the same direction as the last three photos above.

Note the construction on stilts in the Charles River on the left. 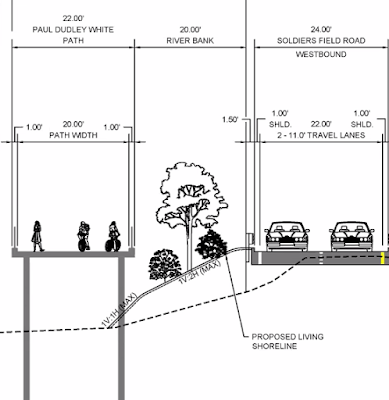 The issue would appear to be whether the BU property being offered would be sufficient to move the construction out of the Charles River.  Note, however, that the ARCHITECT GROUP includes access to and work on the Grand Junction for the related environmental destruction there.

As I said, MassDOT does not want the destructive Grand Junction work.

Posted by Friends of the White Geese at 3:17 PM