Photos of the freed up Goose Ghetto

On February 13, I took a number of photos of the Destroyed Nesting Area of the Charles River White Geese.

The state has completed the work on the BU Bridge which required destruction of a 50 foot area for access to the lower portions of the bridge. 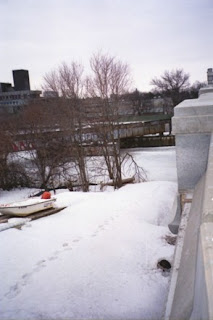 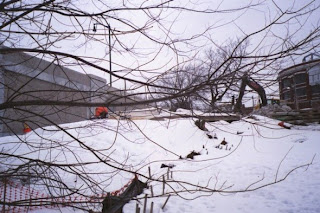 No remediation was provided although it would be simple to allow the Charles River White Geese to return to their home for most of the last 30 years. All that is necessary is

1. To chop down the bizarre wall of introduced bushes which now block access between the Charles River and Magazine Beach. This bizarre wall is the only vegetation bordering the Charles River basin which is not chopped down twice a year. The key manager has bragged that this wall starves the Charles River White Geese. He has spent ten years claiming no intent to harm them, but more recently has announced that his definition of harm does not include starving them.

2. Rather than dumping poisons on Magazine Beach to keep alive sickly stuff which been introduced there, to seed Magazine Beach with the healthy native grass which survived there for the better part of a century until the truly bizarre work which has been inflicted on the area was accomplished. Replacing poisons with the environmentally responsible grasses the state and Cambridge destroyed would allow the playing fields to be enlarged to the area they occupied before the project. A massive drainage system has replace much of the playing fields to drain off poisons which should not be dumped on the banks of the Charles River.

As of February 13, a major part of the Goose Ghetto has been freed up. All we need is city and state governments worthy of our respect to return this area to nature. 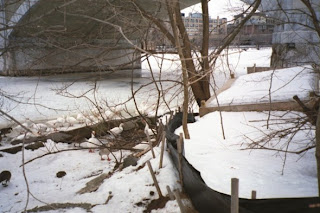 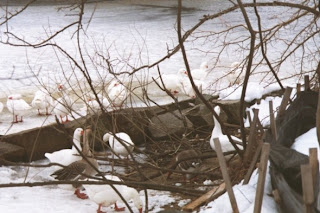 I am enclosing five of the 15 photos which I took. All 15 are posted on the Charles River White Geese page on facebook.

The first two photos, published near the top of this report, show the wasteland from below and above. The two photos just above show these beautiful animals cavorting in the Charles near the the bottom of the walled off area. The final shot shows Whites and Canadas on land from which the DCR has destroyed all ground vegetation, admiring the river. 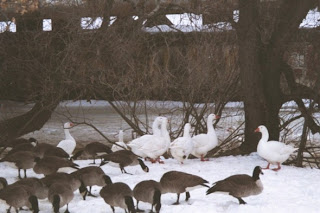 Posted by Friends of the White Geese at 12:47 PM