I have reported a number of times with regard to the destruction on the Cambridge Common funded by the environmentally destructive Cambridge City Council and Commonwealth of Massachusetts.

My most recent report, with links, was posted at http://charlesriverwhitegeeseblog.blogspot.com/2014/08/ma-lt-gov-candidate-cheung-ready-go.html.
I just went by the Cambridge Common yesterday.  I was distressed and temporarily happy by what I saw.

The distressing aspect was that the place is very clearly a construction zone.  The pleasant aspect is that a lot of trees slated for destruction appear to still be there.  Trees spared the destructiveness of the environmentally destructive Cambridge City Council are protected by slats wrapped around them.  Too many are not protected.

Here is a photograph of the threatened entrance facing Harvard Square.  The vile city government is destroying trees because they “block” views of a monument, and because the planners think that the existing path would look better moved to where excellent trees currently are. 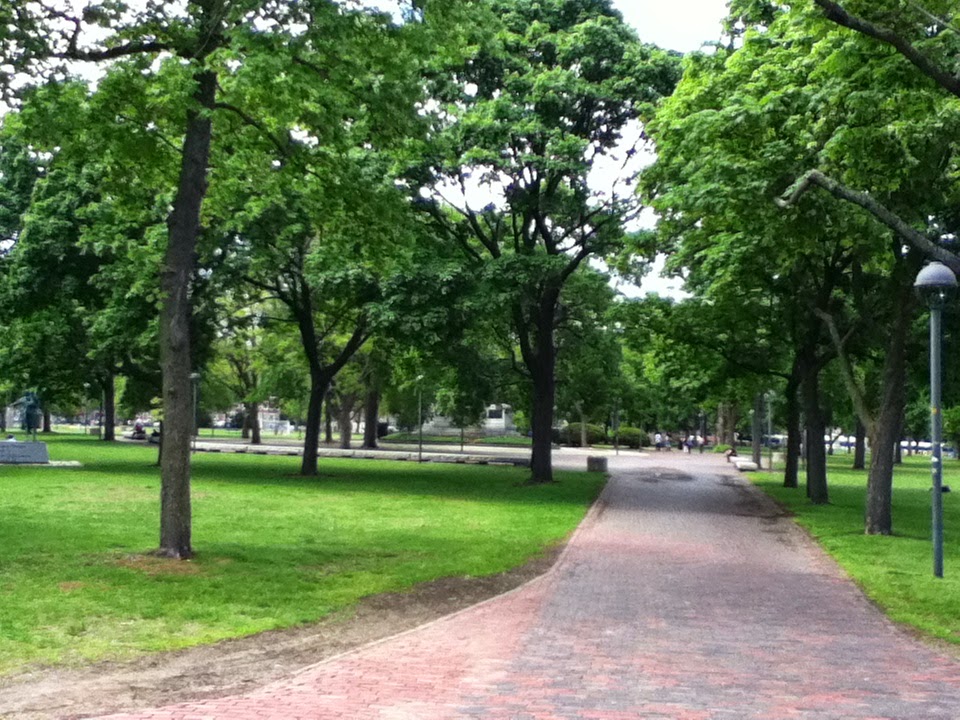 Looking at the Environmental Notification Form again, it reads that 22 trees will be destroyed as part of this part of the outrage.

That is the good part.  The bad part is that my recollection is that the project includes destruction of trees on Waterhouse Street which are not apparently counted in the report.  I have provided photos of those threatened trees as well.  I did not go by this part of the Cambridge Common so I cannot comment on whether or not they have been destroyed yet.

Then, there are so many trees not protected by those slats of wood which do not fall into either category.

And Cambridge commonly lies through omission.

And the biggest mistake you can make on environmental destruction when it comes to the reprehensible (to quote that civil rights judge) City of Cambridge is to assume: “They would never stoop so low.”
Posted by Friends of the White Geese at 4:01 PM