These photos are taken from the BU Bridge.  The railroad bridge to the right is the Grand Junction railroad bridge, sought to become an off ramp from I90 (Mass. Pike) to Cambridge.

The treed area is the Destroyed Nesting Area where the Charles River White Geese are confined without food.  Looking at the shore line very carefully, you will note a brown area.

Not long after the CRC started destroying for the dreaded DCR, massive amounts of ground vegetation were destroyed, pretty much all the ground vegetation in the Wild Area on the east side of the railroad tracks, and, once again, probably more than half of the destroyed nesting area, including the important parts, on the Charles River and below the railroad tracks.    The rest of the destruction is areas left over from the BU Bridge project which were left as dirt.

Ground vegetation not destroyed by the CRC was part of the CRC avoiding the areas slated to be destroyed as part of work on the BU Bridge.  Poisons must have been used because the destruction has continued for years as bare earth, only made worse by employees of the railroad with the approval of the dreaded DCR.

The best remaining ground vegetation is vegetation which bordered on the BU Bridge construction area.  That area is vibrant and excellent, exactly what would have continued without these vile people.

Here are three photos, along with croppings.  They look beautiful to me.  I hope you like them.

Some dark shapes may be seen in the middle of the Charles River White Geese.  I presume these are members of the gaggle who show vestigial Brown China markings or the female Toulouse Goose who was abandoned in fall 2000.  The Toulouse mated with a member of the gaggle and they have raised a family.

Some of the offspring of the Brown China marked geese and of the Toulouse continue to have dark features in their coats.

This is the beauty which vile government entities and their undisclosed cheerleaders are attacking.  Further destruction is probably included in the State House’s $20 million vote of 2014, which also destroys hundreds of trees between here and the Longfellow Bridge on the Charles River.

The Cambridge City Council is working on their own destructive plans for the Grand Junction Railroad.  They lie about the plans through omission.  They brag about the stuff which will please the voters and lie by saying, through omission, that the plans have nothing to do with the Charles River.

The voters get very touchy about the Charles River, and if reality were in play in the City of Cambridge, ten city councilors (out of nine) would have explanations to give, at minimum, particularly the environmental destroyers who lie that they love the environment. 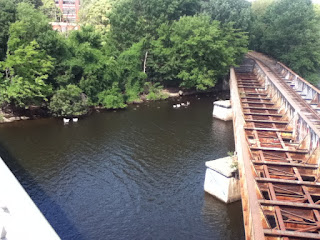 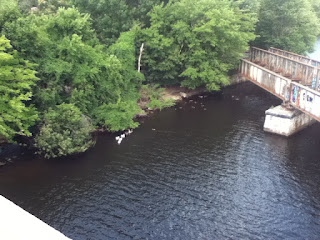 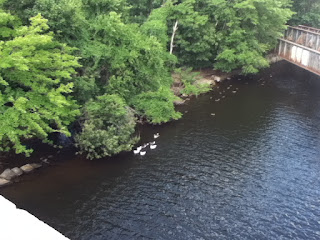 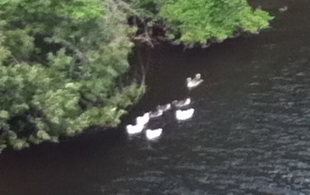 ADDENDUM: The little guys are probably Mallard Ducks.  Interesting there are no Canadas in any shot.
Posted by Friends of the White Geese at 12:30 PM