I have previously reported tentative forays by the Charles River White Geese into that portion of their Nesting Area which has been destroyed for work on the BU Bridge (plus excessive destruction).

I saw them first venture into a near portion of the impenetrable thicket being created there by the DCR, and then up the hillside supporting the on ramp to Memorial Drive, the northern part of the nesting area.

I have gotten reports yesterday of the geese extending further out and crossing the on ramp to feed on the grass under Memorial Drive.

I am trying to place the situation in perspective by this report. I will follow up with a separate report with analysis. here are a few views. The two reports are separated because the other report WILL be long and these photos are taking more than I expected, but they are of value. 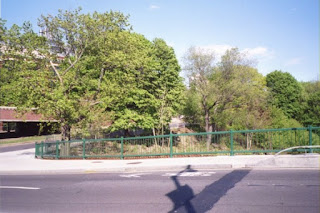 This is a photo I took in April from the far side of the BU Bridge. The near asphalt is the BU Bridge. The asphalt on the far left toward the top is the on ramp. The brick structure above that is Memorial Drive. The entrance illegally created by Boston University for the Department of Conservation and Recreation’s predecessor is just beyond the last fence segment to the left. If you look closely, you can see the opening.

Inside the fence is the Destroyed Nesting Area. Visible is the hillside supporting the on ramp. The geese I saw exploring were in the open spot just beyond the big tree.

They usually wander through the opening, turn right and stand at the curb watching traffic. When it seems safe they cross. They are extremely responsible pedestrians waiting for the traffic to clear. When crossing, regrettably, they walk like a bunch of geese. They do not go straight. They meander. I have never seen a drive complain during one of their crossings. They are loved by one and all, as long as one and all are not part of the Cambridge Machine and their friends. 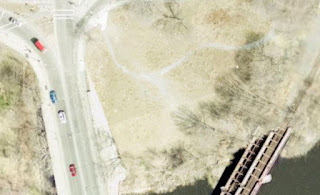 This is an arial shot in winter 2006 of the Destroyed Nesting Area.

What is so very dramatic about this photo is that, while it is a winter scene, ground vegetation is visible almost everywhere, albeit in winter dormancy. All that vegetation has been destroyed except for limited native bushes abutting the construction zone / soon to be impenetrable thicket.

Looking at the top right of the BU Bridge, you can see the curve shown in the photo. Just to the right of it is a big white area. This is the entrance illegally created by Boston University for the DCR. This is how the Charles River White Geese exit seeking food because they are being starved.

The winding path coming out of the white area is a silly ash path created by Boston University which immediately started washing into the Charles River.

The area at the top and slightly to the right is where the Charles River White Geese cross to get the pittance of food under Memorial Drive. 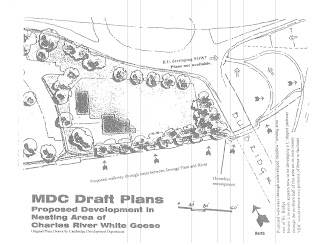 In August 1999, I obtained from the head of planning for the Metropolitan District Commission (the DCR’s predecessor) her plans for destruction at the goose meadow and Magazine Beach. She went over the plans in detail with me, showing the tiny differences in her plans from plans announced by the Cambridge City Manager in fall of 1996 in a meeting organized by the predecessor of the Charles River “Conservancy”.

I marked up the plans and used this portion of the marked up plans as a flier.

Note in particular the small vehicle highways. These have been started in the current outrage. Note the lines under the BU Bridge. This is a highway proposal under the BU Bridge to connect the Goose Meadow to the Magazine Beach playing fields.

To the left of the BU Bridge is a pollution control plant of the Massachusetts Water Resources Authority which is brilliantly designed to minimize impact.

To the far left is the east extremity of the Magazine Beach playing fields.

If you look carefully, you can see the highway in the Charles. This highway with massive environmental destruction, destruction of trees, and heartless animal abuse is still being worked for, but the CRC has switched to the Boston side because the bureaucrats have condemned their highway as an outrage.

These plans were before the illegal destruction by Boston University. The illegally created opening shows on the plans a little to the left / west of where it was ultimately created. To its right is the ramp that the Charles River White Geese cross to get a pittance of food under Memorial Drive, since they are being starved, denied the grass at Magazine Beach they lived off for most of the last 30 years.
Posted by Friends of the White Geese at 3:14 PM