I90 / Mass. Pike Rearrangement South of the Charles River — Maps and Links

The Massachusetts Department of Transportation will be having a third meeting on this project this evening in the Allston neighborhood of Boston.

They have set up a good web page with a lot of information on it, at http://www.massdot.state.ma.us/highway/HighlightedProjects/AllstonI90InterchangeImprovementProject.aspx.

Additionally, the page includes an excellent map of the area which I am posting. 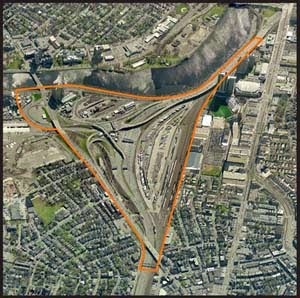 The map gives the impression that the area that the Department of Transportation is working with goes to the Charles River.  My recollection is that they have specifically said it does not include Soldiers Field Road / Storrow Drive, the limited access boulevard which parallels the Charles River on the Boston side.

The boulevard coming from the top right corner is Commonwealth Avenue.

In an earlier report I showed how to create a Green Line A spur connecting the new Harvard Medical School (in planning on top of as much as they can get away with) to the existing Red Line B which runs on Commonwealth Avenue, I commented that all that was needed to connect the new spur to the existing line is old technology, a switch which would allow the connection.  That comment said the new switch would duplicate an existing switch at Packard’s Corner.

The existing switches are (or were) where Green Line B turns with Commonwealth Avenue.  The former Green Line A went straight ahead on Brighton Avenue.

Here is my map showing the Green Line A proposal to put things in context.

The rail yards are to the left rather than being in the middle.
Posted by Friends of the White Geese at 1:07 PM