The outrage at the Cambridge Common and my work on the possible Green Line A project combined with some computer oddities, so that I have not been able to pass on some photographs I took on April 29 at the destroyed, and threatened Nesting Area of the Charles River White Geese.

1. Threatened excellent tree, one of hundreds. 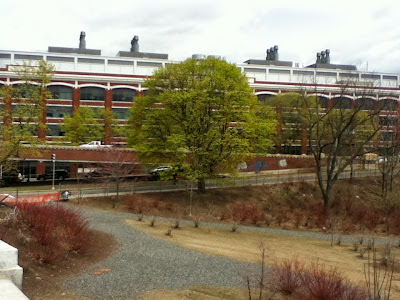 This tree is magnificent.  It is just east of the BU Bridge, hanging over the Destroyed Nesting Area.

This tree is one of the hundreds the fake neighborhood association is fighting to destroy by telling people to look at everything else.  That destruction is likely to include even more destruction in the Destroyed Nesting Area and ramping up of the abuse of the Charles River White Geese, 34 year, beloved residents of the BU Bridge area of the Charles River, beloved except by the folks spending the money.

The dirt is the remnants of the BU Bridge project, delivered by the Massachusetts Department of Transportation following plans of the Department of Conservation and Recreation.

The politics are that the DCR is truly vile and is in bed with the fake ground which calls itself a neighborhood assocation and lies that it is defending the Charles River.  This is a standard company union.  Fill a gap, lie that you are holier than thou and fight for exactly the opposite of what you claim to stand for.

This tree is temporarily living proof of just how vile Cambridge, its fake groups and their friends are.

Through corrupt tactics, they have working for destruction and destruction.

Cambridge has shown on the Cambridge Common, the sort of outrage this reprehensible government considers normal.  It is silly to distinguish between Cambridge, the DCR and all the various lovely sounds which lack reality. 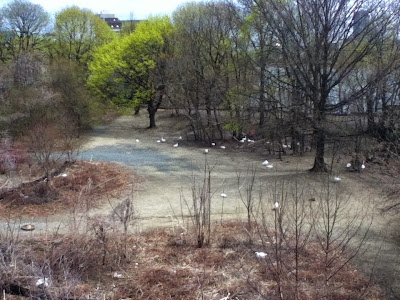 This used to be lush vegetation.  The two patches of vegetation coming to life on the left and the bottom are the portions which were not destroyed by Cambridge’s friends.  There are signs on the right of each of these patches that nature is starting to heal itself, but nature will probably not be allowed to do so.

More recently, rail workers WITH THE EXPLICIT PERMISSION / DIRECTION OF THE KEY MANAGER added to the destruction and dumped more crushed stone.  This highly paid fraud has spent at least a decade lying that he has no intention to harm the Charles River White Geese.

And the publicly announced plans being considered by the Cambridge City Council for destruction here would only be a start on the $20 million outrage supported by the State House in 2014. 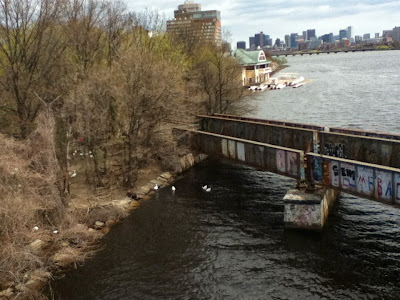 The destroyed nesting area is to the left.  Once again, the waterfront was lushly vegetated until Cambridge’s friends destroyed the vegetation.

The structure in the middle is the railroad bridge on the Grand Junction Railroad.  This is the future location of an off ramp from the Massachusetts Turnpike (I90) to Cambridge, if the powers that be get their way.  This off ramp is the key reason behind the destruction of those hundreds of trees.  Cambridge and its friends are rearranging Memorial Drive to take the traffic.

Just beyond the bridge on the left is an adjacent wild area.  Cambridge / the bureaucrats / the CRC destroyed this area for resident animals as part of the Destroyed Nesting Area destruction.

Beyond the trees visible on the left is a yellow building.  That is Boston University’s Boston boathouse. 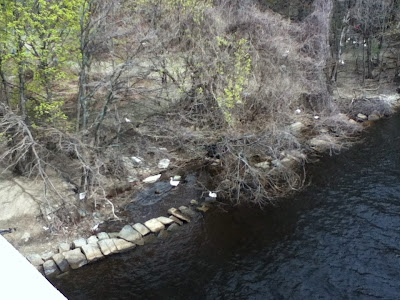 The Destroyed Nesting Area / the Charles River pretty close to the BU Bridge.  The diagonal area at the bottom left is a portion of the BU Bridge.
Posted by Friends of the White Geese at 1:37 PM