The falsely named Charles River “Conservancy” posted on its facebook page on Thursday, March 15, 2012, a beautiful photo of a Muskrat in the Charles River near Watertown, MA. 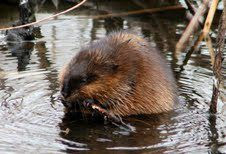 This photo posting is an excellent example of the cynical tactics by which destructive entities lie about themselves, their environmental destruction and their heartless animal abuse.

The CRC is posting this photo and admiring this excellent animal. That gives the highly false impression that they are pro environment.

Animals are explicitly under attack on the Charles River basin by the DCR and the habitat destruction which the CRC specializes in directly attacks the animals of the Charles River. Over the past 10 years, it is impossible to say how many animals they have killed. It is clear that they have been deliberately starving the Charles River White Geese since 2004 by walling off Magazine Beach and the food there which these beautiful animals have had as their principal diet for most of the past 30 years.

The lie from the CRC also is a sophisticated lie about the destructive entities with whom they are so closely aligned, the DCR and Cambridge. Look at the photo of the muskrat. Don’t look at the heartless abuse at Magazine Beach and the destroyed nesting area. Don’t look at the acres of wanton destruction at Alewife and mass animal killing there.

Look at the lovely photo of the muskrat.

Do not look at the dishonestly by which an animal destructive organization lies about itself by showing this photo without mentioning its own very destructive reality.

Since the CRC started environmental destruction for the DCR, almost all ground vegetation has been destroyed between the BU Bridge and, to its east, the BU Boathouse. This is the ghetto to which the beautiful Charles River White Geese have been heartlessly consigned.

The photo was take by Carole Berney, wildlife photographer, and submitted to this falsely named group.

Please note that this photo is being reproduced without permission under the fair use doctrine.
Posted by Friends of the White Geese at 11:37 AM