Near the entrance I saw Mandrake or Daffney, the Charles River White Ducks. These are two Pekin Ducks who were dumped at the Magazine Beach Playing Fields in 2006 on the day before Friends of the White Geese conducted a memorial for Bumpy, the leader of the gaggle.

The Charles River White Ducks have now lived on the Charles River for almost seven years, and for the past six have resided in or near the Destroyed Nesting Area. They have kept as a couple with occasional friendliness to the Mallards.

I saw the pair together at the beginning of nesting season but I have only seen one at a time when I visited since. That is common during nesting season, but it always scares me. The last two visits, I have seen one of the pair with a Mallard. Here is a photo of the Charles River White Duck with the Mallard. As I was leaving, I was pleased to see a white shape sleeping under the far side of the bush, probably the other of the pair. 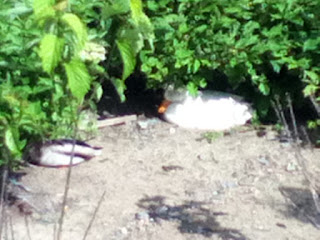 A number of members of the gaggle with this year's offspring were on the hill under the big tree with their offspring. This area was heavily vegetated until the Cambridge Machine related Charles River “Conservancy” rather clearly destroyed the ground vegetation as agent for the DCR. 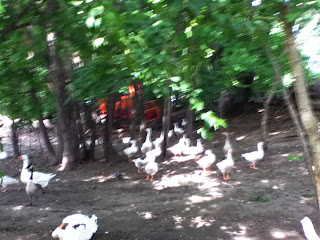 The dominant feature, as usual nowadays, is the misbehavior of the friends of the Cambridge Machine, the Department of Conservation and Recreation and their railroad workers. These irresponsible people have been destructively parking here instead of across the adjacent ramp to Memorial Drive most of the time since December 2012. Responsible parking would be no big thing, but they are lazy and have an irresponsible Cambridge Machine reflexively helping whatever destructiveness the DCR is involved in.

The con game with the Cambridge Machine is always false claims of love for the environment which is being destroyed by their friends combined with con games of seeking support for whatever incidental initiative they can dream up to keep well intended people from doing something constructive. As reported here, the Cambridge Machine has fought for the expansion of destruction on the Charles River with corrupt behavior in recent months.

The railroad workers are still too lazy to go the small distance to responsible parking. They have now even expanded back into the area protected by the Cambridge Conservation Commission.

The irresponsible stuff the bad guys have inserted into the tiny protected area are a flat bed and a small truck. 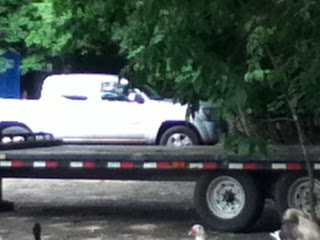 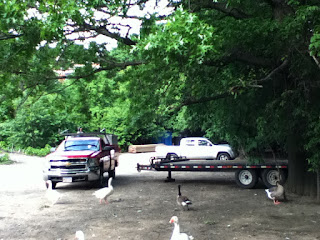 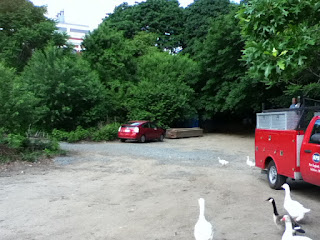 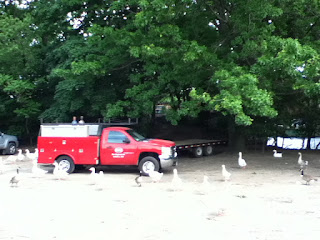 The next to the last shot shows crushed stone (the grey stuff) dumped into the environment by the railroad workers. The car in the distance is a few feet from the illegally constructed staircase to the on ramp.

This is a photo from a few weeks ago of where responsible people would be parking. The car at the top of the ramp is not far from the top of the illegally constructed staircase.

There are State Police stationed in the traffic area outside the Destroyed Nesting Area to assist drivers detoured off the brick Memorial Drive structure to the on ramp for construction.

As I was leaving, an officer assisted a group of the gaggle crossing the on ramp to get to that grass next to Memorial Drive to feed on. The Charles River White Geese are careful pedestrians. They wait on the side of the ramp until traffic is clear. Their trouble is that they are geese and can dawdle. The officer was kind enough to assist.

This assistance from the State Police was very welcome. Passing pedestrians were very pleased to see his help, and the drivers are always pleased to see the Charles River White Geese on this short foray.

The Charles River White Geese are being deliberately starved by the misbehavior of Cambridge and the DCR. This grass, with the danger, is the little which is not destroyed for them.

I will copy this report to Jennifer. She is a responsible person who does not need a lot of nagging. I have thanked her on these pages in the past for support.

Posted by Friends of the White Geese at 8:33 AM