Visiting professor Robin Pope addressed the following communication to me and to the local state representative.

Her email followed on a series of emails, in particular from one of mine.  It repeated copies to individuals from the prior emails.

The only change is my French based fussiness on including “La” in my name, and a couple of typos.

On general principals, as part of this introduction, I am enclosing a photo of the outrageously doomed Willow. 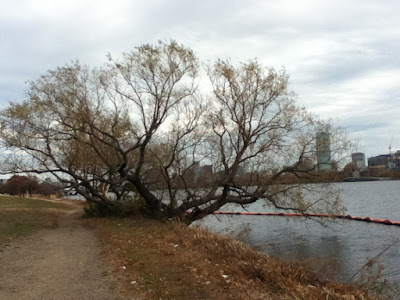 thank you for this work Robert J La Trémouille and your role in the chance Cambridge has to be a steward to nature in the form of the white geese, with every runner stopping to photo their goslings in the season, and the pastoral scene of canadian geese under giant oaks just east of the Hyatt Regency on the north side of Memorial Drive. In my research sojourn at the Hyatt, these geese have added immeasurably to my pleasure and sense that Cambridge has some playing their role of caring for nature, instead of smothering it in concrete and bitumen for cars where you national Institute of Medicine finds the automobile likely behind the USA having double the rate of deaths of other advanced countries in every death category. The roar of traffic on both sides of the Charles is a blight on this potentially beautiful area of recreation.

The willow with its graceful bends is the only item right on the bank that a Chinese artist would place in a painting. The water's edge is otherwise boringly stiff sanitized, bar the rather graceful, also marked for execution Mulberry tree whose fruits are eaten by the ducklings, gosslings and people. The cherry grove east only a little back from the basin, fruits eaten by people, and the cherry line west of that willow, are the only other trees old enough to have acquired graceful bending lines.

I remain shocked, cleft in the heart, that these and other trees, zelkova, lindens, sassafrass, lending biodiversity and pleasure to the eye, all bear execution orange marks on both sides of Memorial Drive. yhe area is a disgrace, prime real estate for beauty with little beyond a boring wall of amorpha fructosa preventing people and animals from being at the water's edge, and limiting severely the wildflowers that otherwise would be in great abundance along that strip.

I find it beyond belief in a so-called advanced country that when I asked workers what they were doing, they said that they are working for the DCR preparing to chop down dead trees, replacing each with 2 saplings. I explained to these workers that the trees marked with orange for execution had leaves on them and that trees with leaves are alive.

I request that all DCR involved in such activities be suspended until they have passed a course on when a tree is alive, know the names and ages of all the trees, and passed a test on the number of leaves lost in chopping down each tree compared to the puny number of leaves on a sapling that will not look gracious for over 50 years moreover as regards beauty. The addition to global warming for some trees threatened with execution may be considerable as the bigger ones may have up to 500,000 leaves each!

We need some dead trees also - none in sight - and why there are no woodpeckers and other animals that require old wood.

I request transparency: a board stating the fund out of which the water pipe work is coming: it would be embezzlement if from the DCR since this is a mix of assisting traffic and the city of Cambridge, not assisting recreation and conservation.

Any genuine DCR work requires a plan placed several times along memorial drive with details on what and why with ample opportunity for the informed to comment. The paltry number of trees must be preserved, bushes added for beauty and animal life, the monotonous boring amorpha fructosa drastically reduced plus the unsightly boring olive'young willow wall removed west of the Massachusetts water works at the start of the Magazine beach. That ought to be a landscape and beauty delight, with a coffee shop in the former gun powder building, alongside public toilets, and an adequate number of benches. How can cambridge get its too immobile population walking without such basic facilities? Needed also are weekly talks on Cambridge history and the nature here. Every school child and adult ought have the opportunity to learn and treasure what you have in a manner yielding them fellowship and a community, as also aiding tourists

greetings for the season

Posted by Friends of the White Geese at 12:36 PM