Monday evening, July 28, 2014, the Cambridge City Council will consider a report on ramping up their heartless abuse of the 33 year resident Charles River White Geese.  My report on the report is below.

Two members of the Cambridge City Council support the proposal without reservation and thus clearly support the ramping up of the heartless abuse of the Charles River White Geese.

I cannot keep publishing the same photos of outrages originating in the City of Cambridge.  Please see my last report for a number of excellent photos in the beginning:  http://charlesriverwhitegeeseblog.blogspot.com/2014/07/ongoing-outrages-report-to-cambridge-ma.html.

The photos last time include

a. That excellent grove which is among hundreds on Memorial Drive slated for destruction as part of the legislature’s is consideration oif $32 million for destruction along with habitat and heartless animal abuse.   The is House Bill H4009, §2C, 2890-7020, approved by the Massachusetts House of Representative.  The State Senate correlative has passed their version.  The two are in conference committee seeking common language for a final vote.

Here is a reasonable in season photo.  Really rotten people.

b. Cambridge Common, magnificent entrance of verge of destruction.
c. Heartless abouse of the Charles River White Geese, photo of goose family.
d. Grand Junction railroad bridge, future home of off ramp from Massachusetts Turnpike (I90) to Cambridge.  Current con is bike highway.
e. Responsible exit for Grand Junction bike highway to the corner of Vassar Street and then Memorial Drive.
f. Cambridge’s photo bragging about its outrageous destruction of acres of irreplaceable wetlands at Alewife.

There are some excellent photos from me in the attachment in front of the Cambridge City Council and linked below.  Here are some photos which did not make it to the last report. 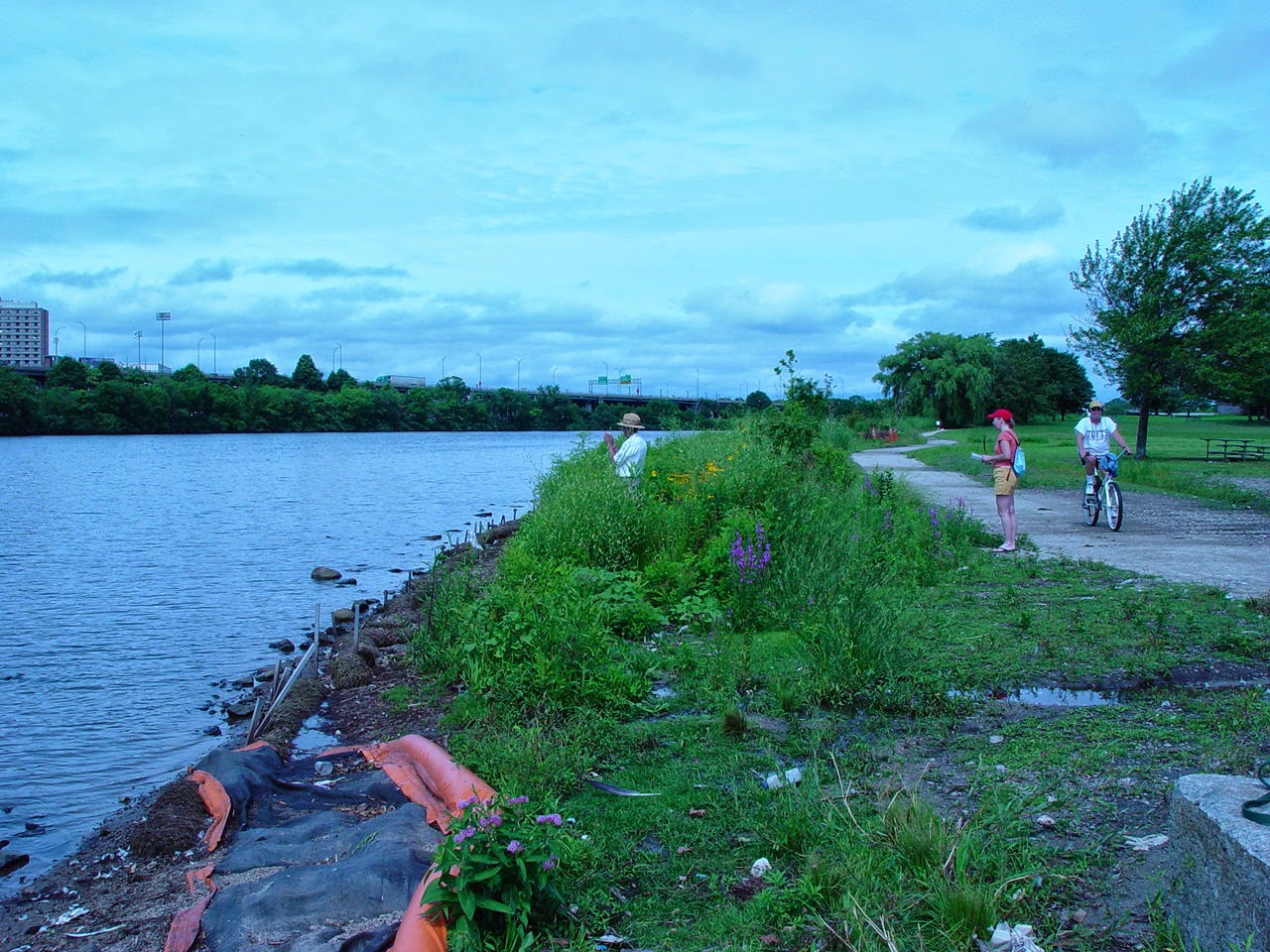 The Charles border of Magazine Beach before the outrage paid for by the Cambridge City Council and the Department of Conservation and Recreation.

The Charles border with its starvation wall, first two  from the Cambridge side and then from the Boston side.  As part of this outrage, the Cambridge City Council, destroyed playing fields for expensive drainage system to drain off poisons.  The poisons are “needed” to keep alive sickly grass introduced after destruction of responsible grass that survived without poisons for the better part of a century. 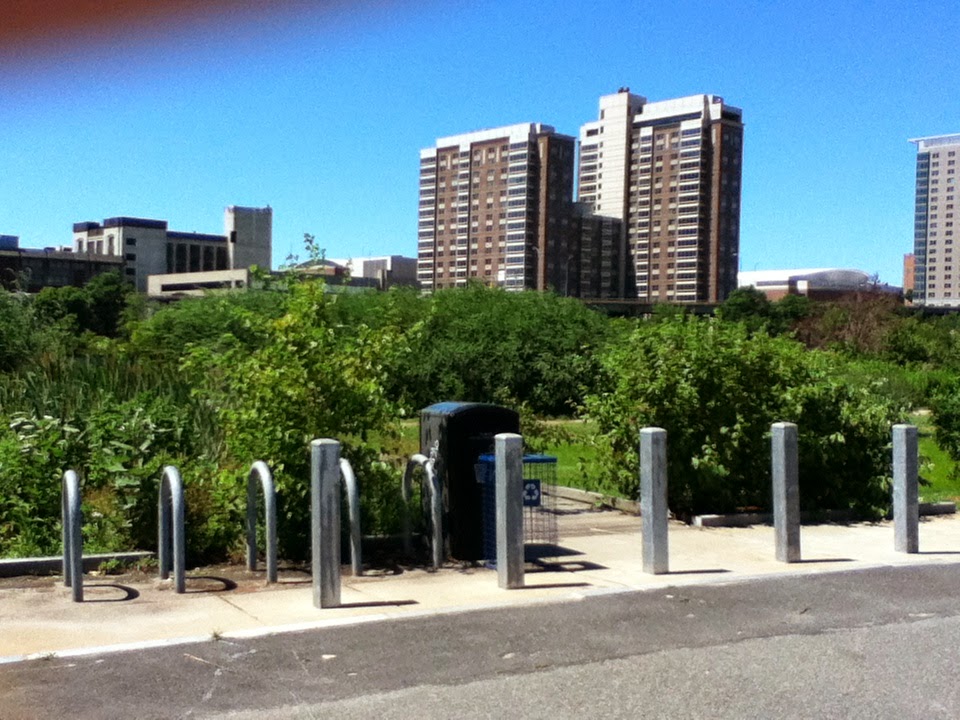 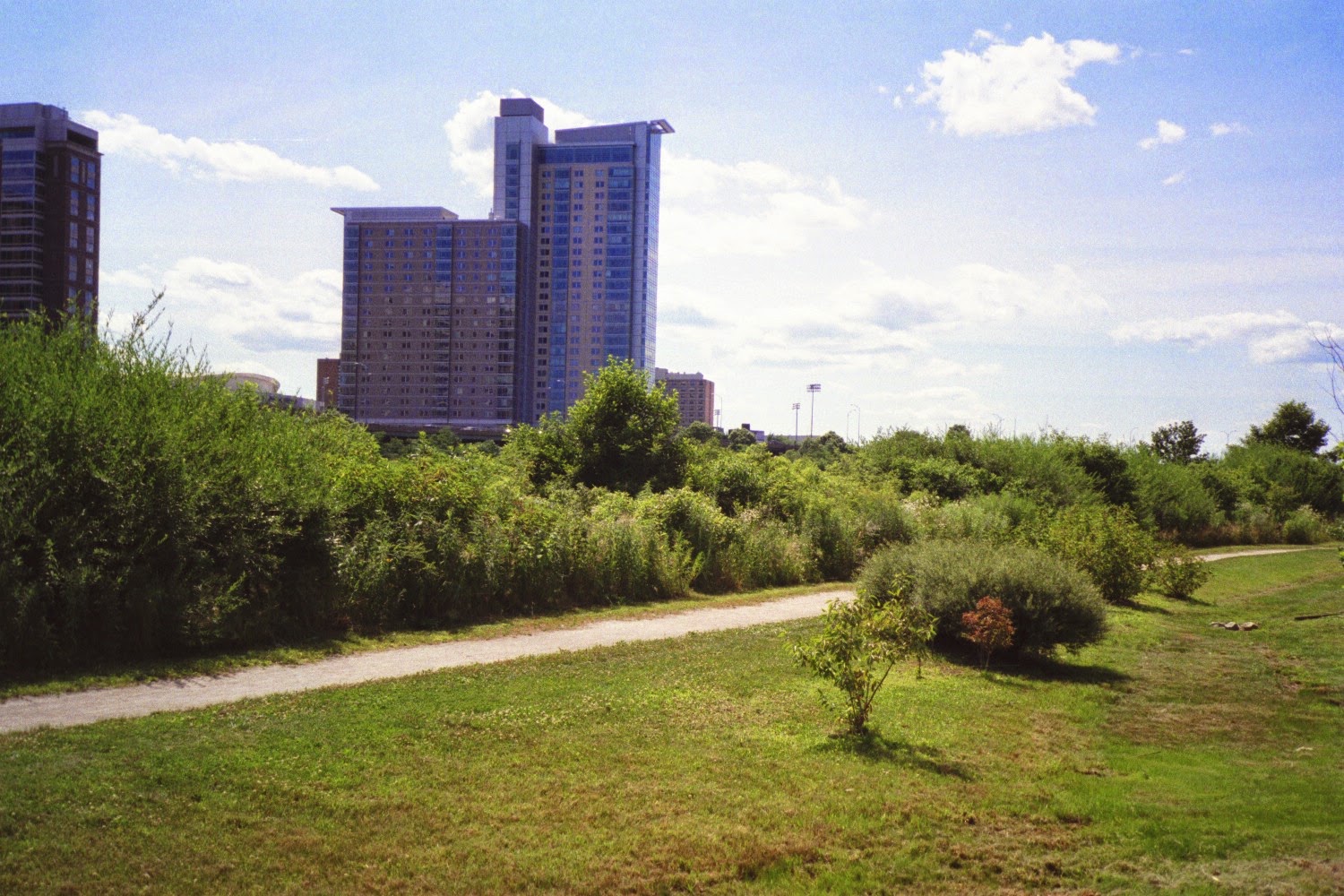 The highway plan for part of the Grand Junction bicycle highway before conversion to Harvard’s Mass. Turnpike off ramp.  The diagonal line is the Grand Junction.  At the bottom right in the Grand Junction railroad bridge.  Just to its left is a U or J shape indicating the highway through the ghetto to which the Charles River White Geese have been heartlessly confined with abuse increasing and increasing, all in furtherance of the DCR contemptible goal of killing off or driving away all resident animals. 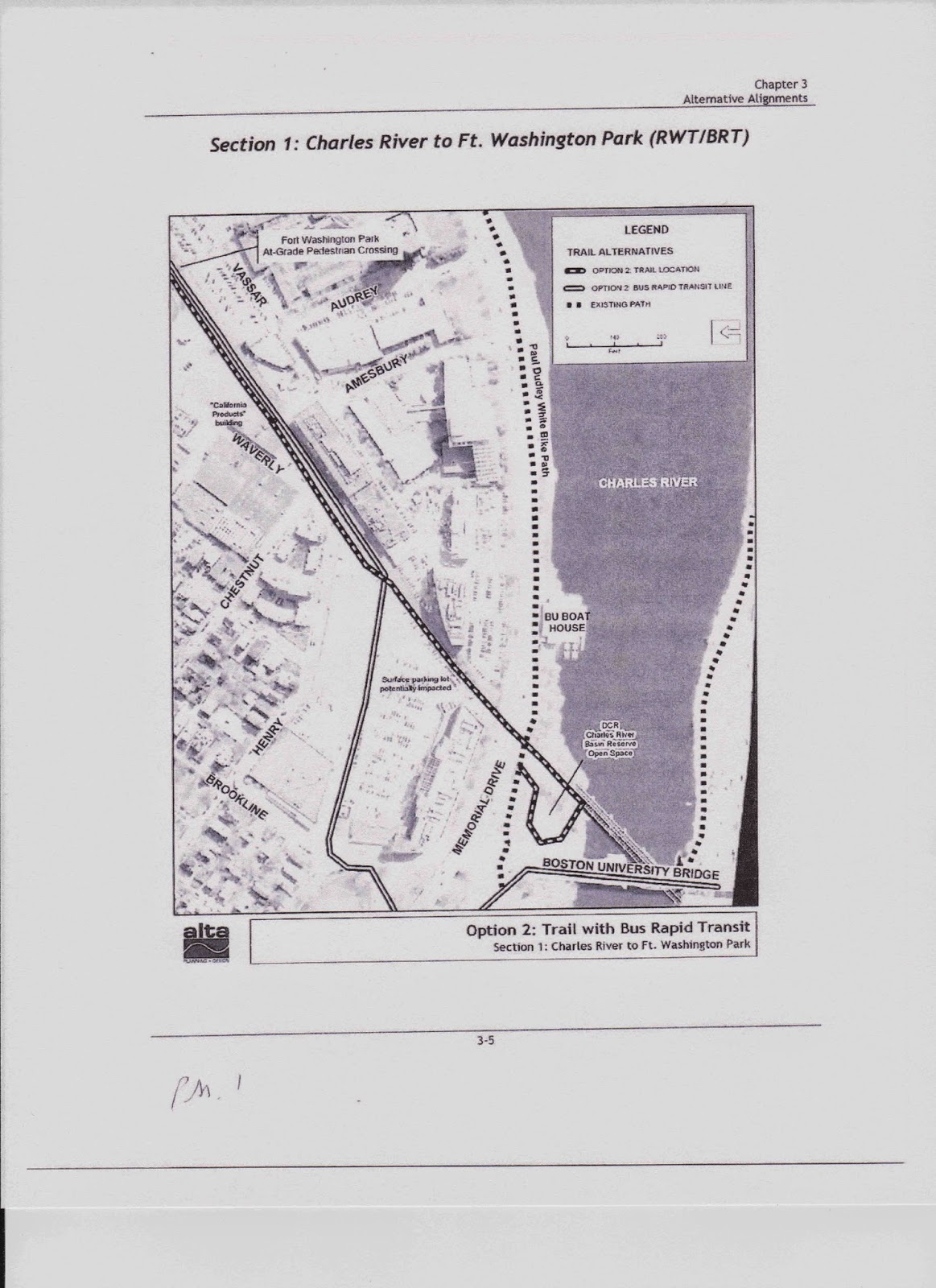 The Charles River White Geese looking for food in the future location of the Off Ramp / fake bike highway.  The goal is to widen this underpass under Memorial Drive wide enough to hold the off ramp.  To the left of the railroad would be installed fencing to divide up the natural area under attack, and thus assist the DCR’s goal of killing off / driving away all animal residents. 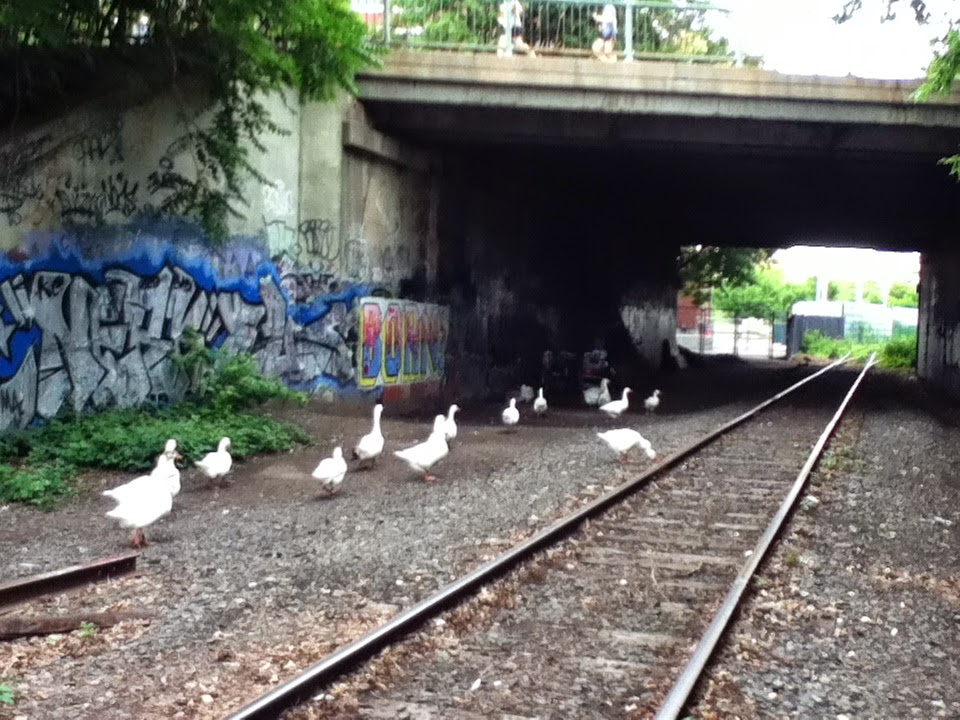 I have avoided Leland Cheung’s campaign for Lieutenant Governor.  I have heard too much holier than thou nonsense without going out of my way to hear more.

Monday, July 28, 2014, the Cambridge City Council will receive a report of a committee considering further heartless abuse of the Charles River White Geese.

The report will have attached to it my response and my detailed evaluation of the harm.  My response is buried as far as possible.

The City Council Committee Report is posted on line at http://www2.cambridgema.gov/cityClerk/CommitteeReport.cfm?instance_id=813

The Attachments including at the very end my response are posted at http://www2.cambridgema.gov/CityOfCambridge_Content/documents/140728%20grand%20junction%20com%20report_1.PDF

I encourage you to review these documents and, in particular, let me know of any errors or omissions on my part by an email to boblat@yahoo.com.

As is the custom of the reprehensible government of the City of Cambridge, the really rotten stuff is kept as secret as possible.

The map I reproduced in section 1 is buried.  Detailed presentation of the impact of their proposal keeps impact south of Memorial Drive, the heartless animal abuse, secret by omission.  The rest of the area impacted is presented.

My presentations includes the best map I have available, the Department of Conservation and Recreation’s tree destruction map which is part of the outrage in front of the legislature in H4009.

The committee report seems to be saying to sit on the recommendation for the time being pending negotiations and other updates.

Two members of the Cambridge City Council support the report including without reservation the ramping up of the heartless abuse of the Charles River White Geese.

Cheung publicly looks like the city councilor representing the Massachusetts Institute of Technology and Harvard University.

McGovern is the only member of the Cambridge City Council who  publicly supported and encouraged the outrage at Magazine Beach.  The benefits he bragged about have not only not been delivered, but the opposite has occurred.

McGovern claims only to be responsible for the good aspects of his position, not the bad.  But there are no good aspects.  His position is cynically hypocritical, not even including the fact he delivered exactly the opposite of what he claimed to be fighting for, and has never, to my knowledge, attempted to get delivered what he promised.

On looking this reprehensible document over further, they seem to have multiple plans on the table for the Destroyed Nesting Area of the Charles River White Geese.

My comment above referred to the absence in the structure of reference to the Destroyed Nesting Area.  They have stuck in some pretty rotten stuff.

In accordance with the reprehensible goals of the Department of Conservation and Recreation, which they support and aid, they do not mention the residents, the gaggle of the Charles River White Geese whom they are deliberately starving and who would be devastated by adding this outrage to the attacks at Magazine Beach.

Also not publicized is the vile DCR goal of killing off or driving away all animals residing in the Charles River Basin.  This contempt for animal residents comports with the pogrom of resident animals included in the mass destruction at Alewife.

Key in the map of the Grand Junction Path is a detailed path proposal which conflicts with the apparent overall plans and is inconsistent with other parts of this report.

The map of the Grand Junction path is on pages 9 and 8, straight down the Grand Junction.  Page 21 provides the same rot in detail.  The map I have included above is from the 2006 study which is incorporated by reference.  In it, they do a loop around the ghetto to which they are heartlessly abusing the Charles River White Geese.  The report calls for a fence to run the entire length of the bike highway between it and the railroad.

Sneaked in at the end of this document is highly outrageous stuff, business as usual when you are working with these destructive people.

It does not seem to include the path which is the basis of all the other maps.

This map shows the Governor Patrick Bike Highway running under the BU Bridge.  This highway is the reason for the only opening in the starvation wall.

It is marked “Charles River Master Plan”.  This “master plan” lied that their were providing a lawn to the river at Magazine Beach, and also calls for killing or driving away all resident animals.

The Governor Patrick Underpass apparently connects to the path system which has been created.  It puts a staircase in in the most sensitive part of the Destroyed Nesting Area and runs a bike highway from the northwest corner to the Grand Junction Bridge.  They repeat the fence dividing the parts of the wild areas east of this highway.  They create yet another apparent foot highway from the staircase to the Governor Patrick Underpass. 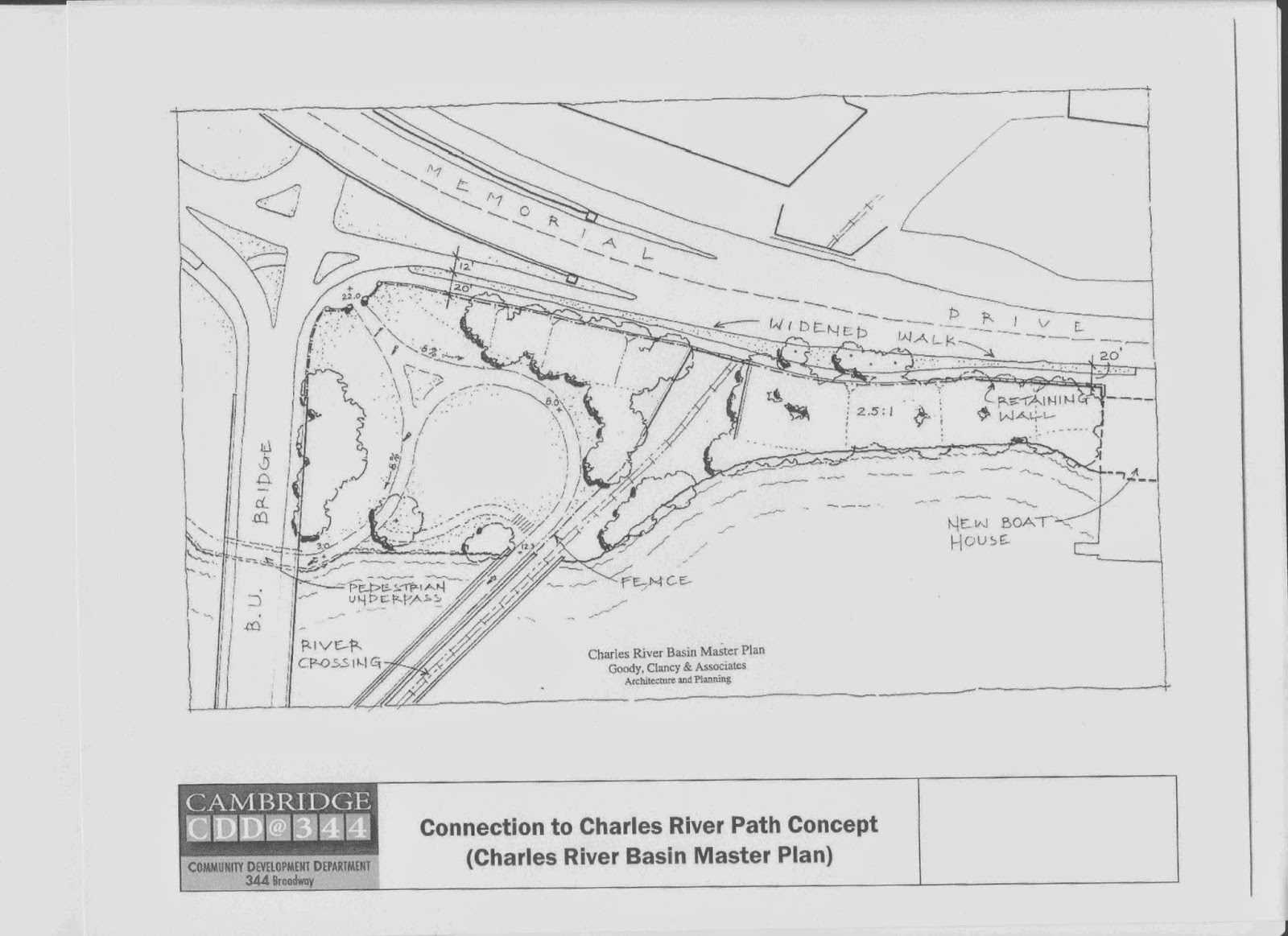 Page 34 calls for an outrageous widening of the right of way in the free animal area.