Here are a few additional photos from my visit on Sunday.

George Despotes has chastised me for all the photos from Sunday with nothing of the Charles River White Geese.

My idea, for better or worse, was that my reports can get too long, and that one report on specific outrages with a separate report on the Charles River White Geese made sense.

George made an excellent point. At least one photo of the victimized heroes would have been an excellent idea.

This is of three geese in the destroyed area next to the BU Bridge. 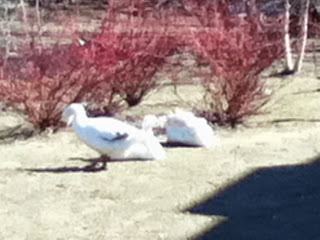 Two are resting. One is looking around.

The lie of “remediation” is blatant here. This is the 50 to 100 foot zone next to the BU Bridge, left undeveloped after the introduction of introduced bushes. Presumably they were left vacant for access.

Was grass seed thrown? Was anything responsible done?

There are a couple of possible explanations.

One possibility is that the bureaucrats are offended by seeding responsible grass. They want to simply create a nightmare and then blame it on the Charles River White Geese. Then offer an “improvement.”

The last thing the bureaucrats want to do in the Destroyed Nesting Area is responsible maintenance. They were in a bind.

The bureaucrats, with the corrupt assistance of the Cambridge Machine, got a fake vote to destroy responsible grass in the area to the west of the Magazine Beach playing fields and replace responsible grass with sickly stuff that needs poisons to survive. This is in the area to the immediate west of the playing fields which contains the building that has not been used for 80 years and which contains the parking lot needed by the little guys which the corrupt vote included in the destruction.

Beyond this area is the area behind the swimming pool.

Both areas, like the playing fields did, do not need “improvements” unless you are so sick that replacing responsible grass which does not need poisons with sickly stuff that needs poisons is something you would call an improvement.

Key in the fake vote, however, is part of Governor Patrick’s destruction of hundreds of trees between the BU and Longfellow Bridges in house bill H3332.

I provided photos of each of these three areas at Magazine Beach’s playing fields in my report at http://charlesriverwhitegeeseblog.blogspot.com/2014/04/spring-cleaning-on-charles-river.html.

I provided the tree destruction plans at http://charlesriverwhitegeeseblog.blogspot.com/2014/04/tree-destruction-plans-charles-river.html.

The last explanation fits the corrupt nature of the people we are dealing with.

B. The rest of the Destroyed Nesting Area. 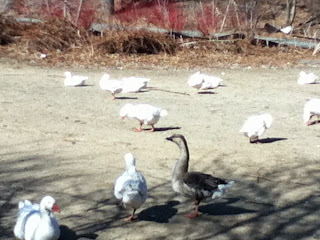 Ground vegetation destroyed by the Charles River “Conservancy,” made worse by the railroad workers' with assistance of the bureaucrats.

3. The Charles River by the Destroyed Nesting Area. 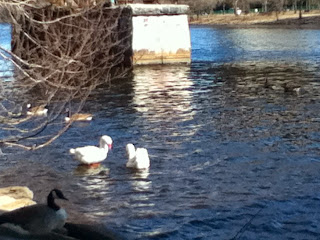 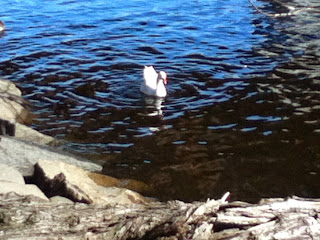 In the background of the first photo are supports for the Grand Junction railroad bridge which the Cambridge Machine and a whole bunch of other people are fighting as secretly as possible to turn into an off ramp from the Mass. Pike. (I90) to Cambridge to assist Harvard’s development of the existing off ramp into a relocated Harvard Medical School.

They are not saying they want such a thing? They are saying to look one of three monkeys: the one that sees no evil.

These people cannot fight to prevent any and all discussion of multiple outrages, slam through a corrupt vote to expand the outrages and then claim to be neutral on the outrages. 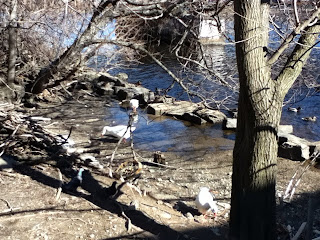 These are two more happy geese in a very telling location.

The near portion was thickly vegetated and very popular for nests until the falsely named Charles River “Conservancy” destroyed the ground vegetation. None of the very extensive destruction by the CRC has ever regrown. It must be assumed that CRC sewed poison to keep the ground vegetation dead.

4. The Charles River East of the Grand Junction. 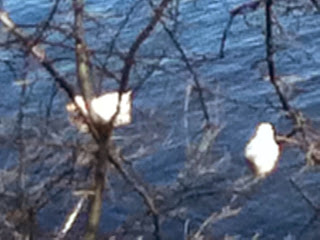 These are the Charles River White Ducks, with (not pictured) a Mallard Duck friend. They were dumped at the Magazine Beach playing fields as babies. They trusted dogs and did not know what that blue stuff was for.

I saved their lives from a dog attack. The folks from the Charles River Urban Wild Initiative showed them what the blue stuff is for. They very happily have adapted and survived for eight years. A major part of the survival, of course, is related to feeding of all free animals by the CRU undoing the deliberate starvation by the state bureaucrats and the City of Cambridge, assisted by the usual cheerleaders.

The ground next tot the Charles River east of the Grand Junction and west of the BU Boathouse is complete devastation, courtesy of the CRC acting as agent for the bureaucrats and the City of Cambridge, MA, USA with whom all general outrages are coordinated.

Posted by Friends of the White Geese at 4:28 PM