The Massachusetts Institute of Technology submitted a report to Cambridge in October 2014 concerning Cambridge’s outrageous plans on the Grand Junction railroad.

Here is an exact copy of portions of page 12 of the report.  This is MIT’s map of the Memorial Drive end of the bike highway.  MIT’s notes to bullets 1 and 3 are copied without edit. 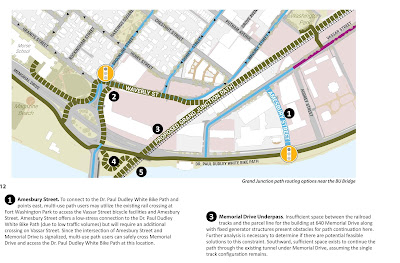 In bullet 3, MIT states that the Cambridge plans come too close to the MIT building at 640 Memorial Drive.

In bullet 1, MIT suggests that the destructive southern portion of Cambridge bike highway plan be ended at Cambridge’s Fort Washington Park and be connected to Memorial Drive from there.

MIT proposes an alternate route which would end Cambridge’s bike highway at the existing pedestrian connector from Fort Washington Park.  MIT’s proposal would run the bike highway along the connector to Vassar Street, turn right, and then turn left at Amesbury Street, the street which contains the Hyatt Regency Hotel.

The bike highway would connect to the existing bike highway on Memorial Drive with a traffic light for protection.

To put this in perspective, here are the routes manually drawn on the relevant portion of MIT’s cover photo. 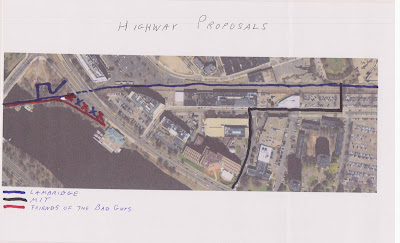 Also included is this rendition is the relevant part of a destructive "activist" proposal in front of the Mass. Department of Transportation’s group which is studying the rearrangement of the Massachusetts Turnpike (I90) on the southern side of the Charles River across from Magazine Beach.

This friend of Boston University / MIT / Department of Conservation and Recreation proposes that the Wild Area between the Grand Junction and BU’s Cambridge Boathouse be destroyed.  This, TO NO SURPRISE, fits in with DCR destruction plans for the Wild Area cited favorably in the Cambridge study.  I printed those plans in my last report.

The other destructive “activist” plan in front of MassDOT proposes to destroy the Boston bank of the Charles River across from Magazine Beach and build over the Charles River as part of the package.  That architect bragged of similar construction elsewhere on the Charles.

The bragging architect did not mention that the governments doing that construction were also dumping raw sewerage in Boston Harbor.

But the destructive “activists” never mention their fellow travelers and the fact that they and their fellow destroyers are rightly condemned by decent human beings.
Posted by Friends of the White Geese at 10:07 AM