The technique used by the fake Cambridge groups are exactly what is defined as company union.

Loudly proclaim responsibility for a field.

Loudly proclaim you are working your intended area.

Loudly suppress any and all discussion of the effort you are really fighting for.

The fake Alewife group achieved the destruction of 3.4 acres of the Alewife reservation with a lot more to come.

They have obtained state funds in the amount of $20 million to destroy hundreds of trees this way.  They are keeping up and exacerbating heartless abuse of the Charles River White Geese this way.  They are fighting to keep and expand the environmental destruction on the Magazine Beach playing fields this way.

My prior report on the latest outrage is posted at http://charlesriverwhitegeeseblog.blogspot.com/2014/10/dcr-cambridge-machine-fighting-to.html.

Now the key destroyer is bragging about a sprinkler system proclaiming that the wading pool east of the destroyed playing fields is in bad shape.  Oh, by the way, it is unthinkable that the replacement water facility go into the place the outdated facility is.  And the construction zone includes a small guys parking lot needed for the little guy to go picnicking.  And they sneaked in destruction of the little guys parking lot into the corrupt vote of April 23, 2013, the beginning of their going public (with as much corrupt behavior as necessary) in their fight for destruction.

Naturally, as part of the build up, the fake group loudly expressed concern to keep the parking lot which their handlers from the irresponsible Department of Conservation and Recreation insisted on destroying.

Here are photos of the latest area targeted for destruction by the fraudulent “protectors”.

The cars and the asphalt under them are part of the little guys' parking lot.  The woven fence beyond the light blue car surrounds the existing water play area.  The low building behind it and to its right is the unused building which the fake group repeatedly has insisted is the only thing on the Charles River that politically correct folks should look at. The eastern portion of the picnic area is to the right rear.  The Charles River can barely be seen directly above the dark blue car and slightly east of the picnic area. 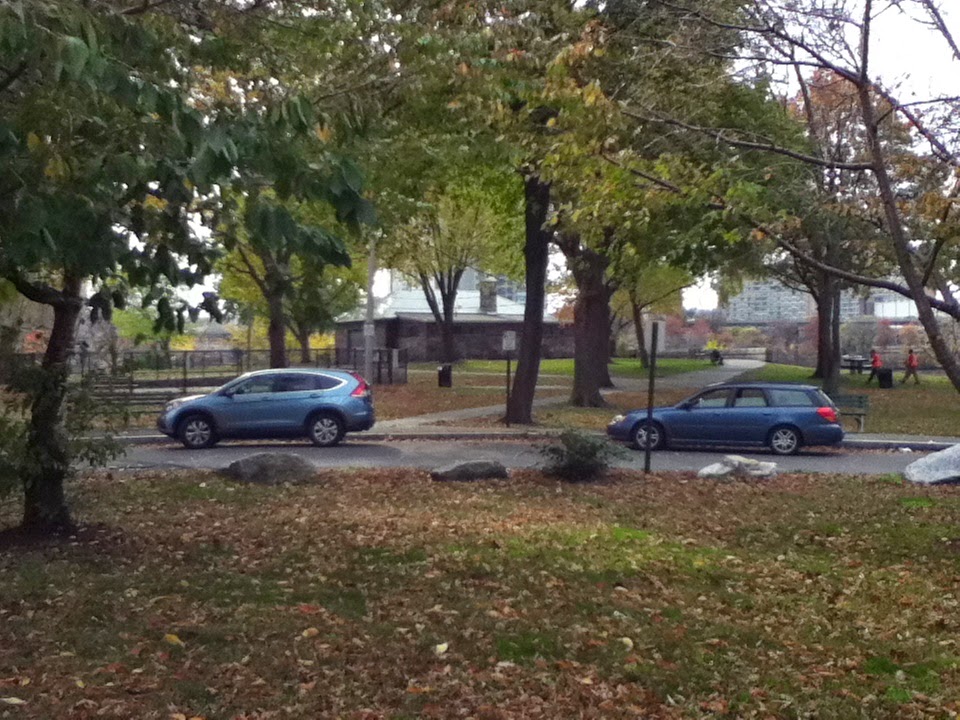 Photos of the attacked parking lot starting from the western end.  It is no coincidence that the construction zone for the new water facility starts to the right (west) of this photo). 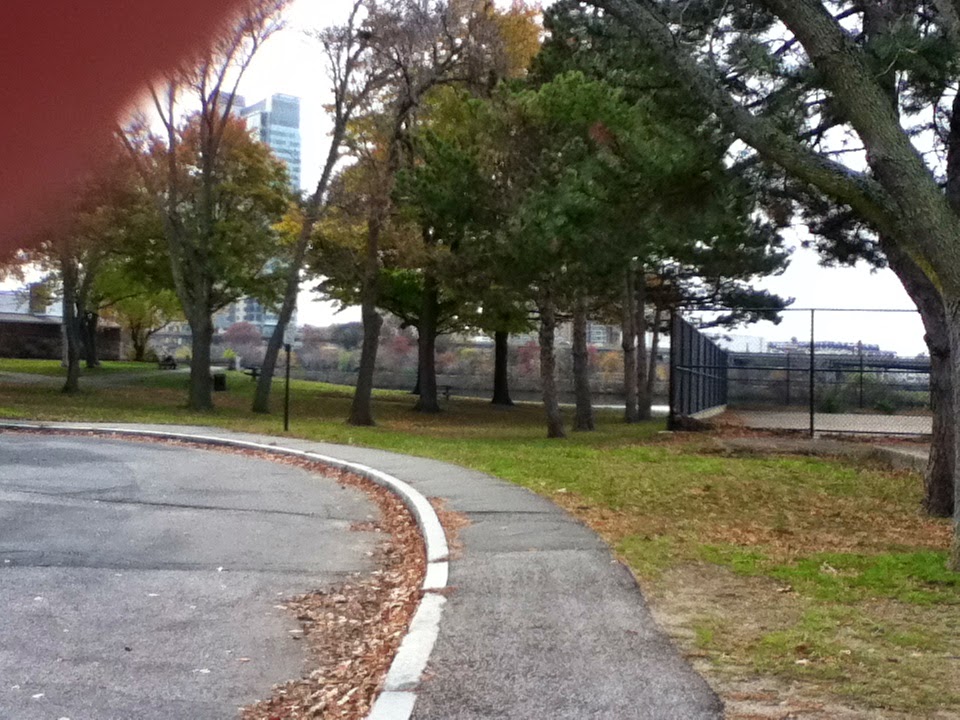 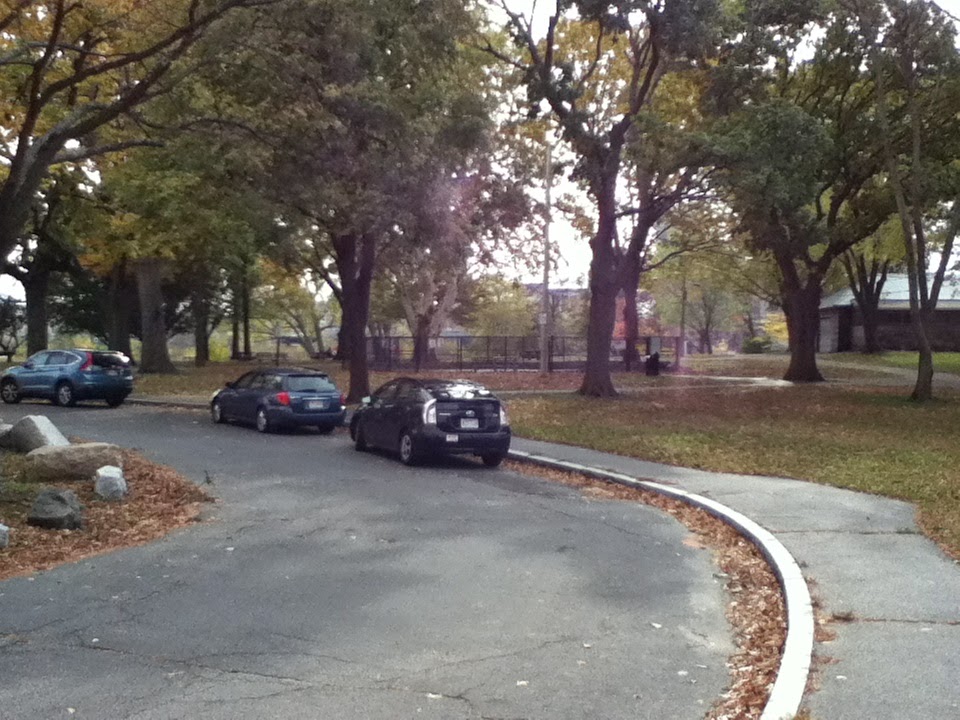 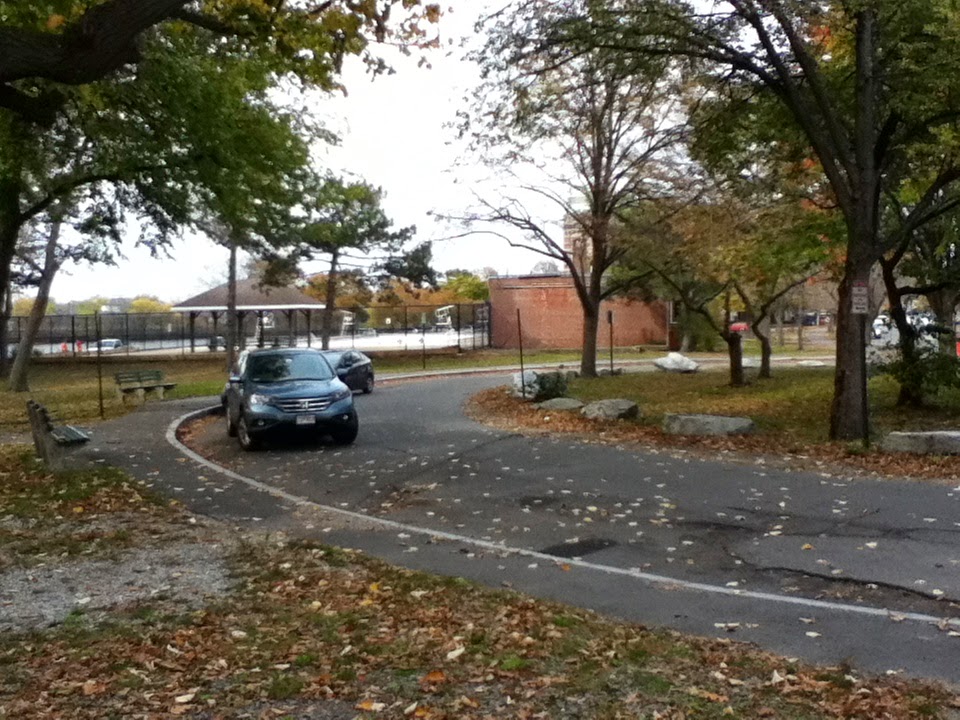 The "water facility" construction area extends to the brick building which supports the pool to its rear.

Below is the same view showing the Charles River in the back ground.  The current, location of the water facility, declared "unacceptable" by the DCR is to the left of this photo. 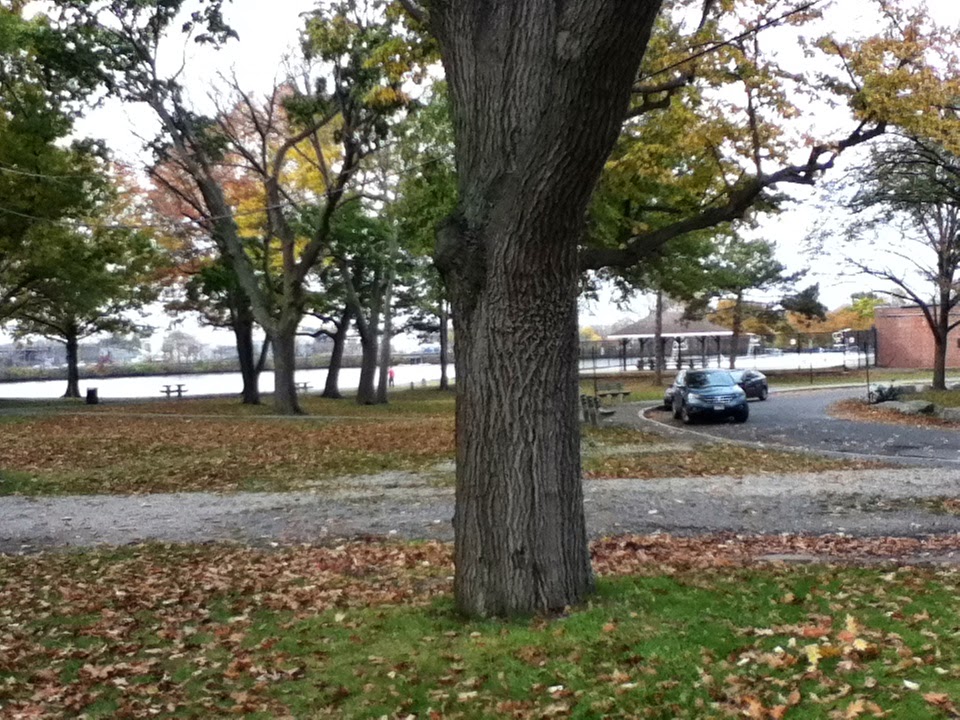 Above and below are two sides of the same tree, marked for destruction. 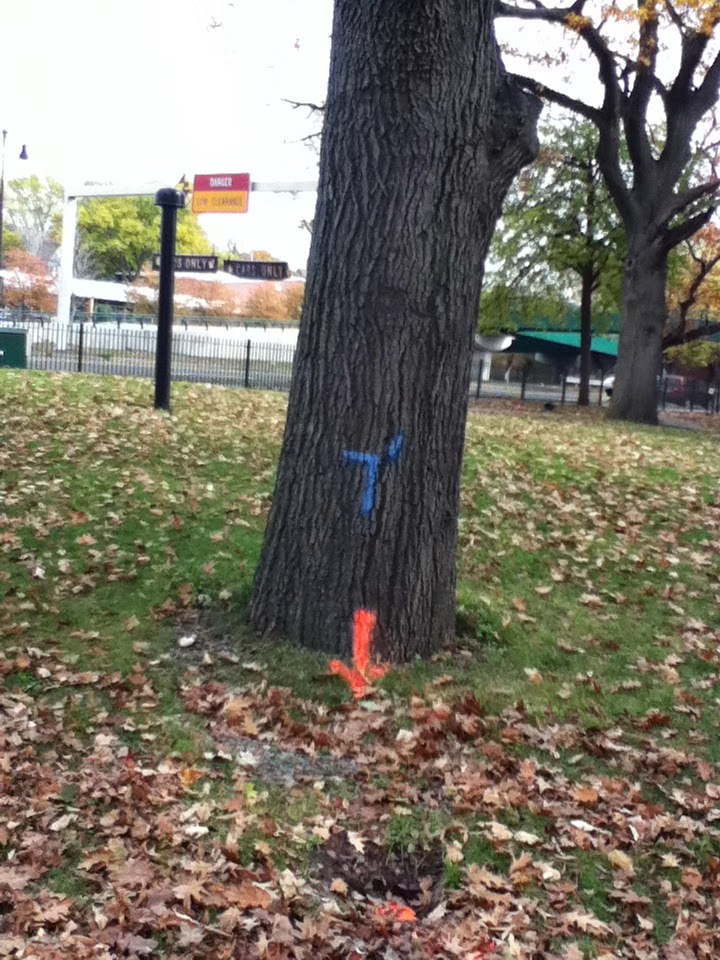 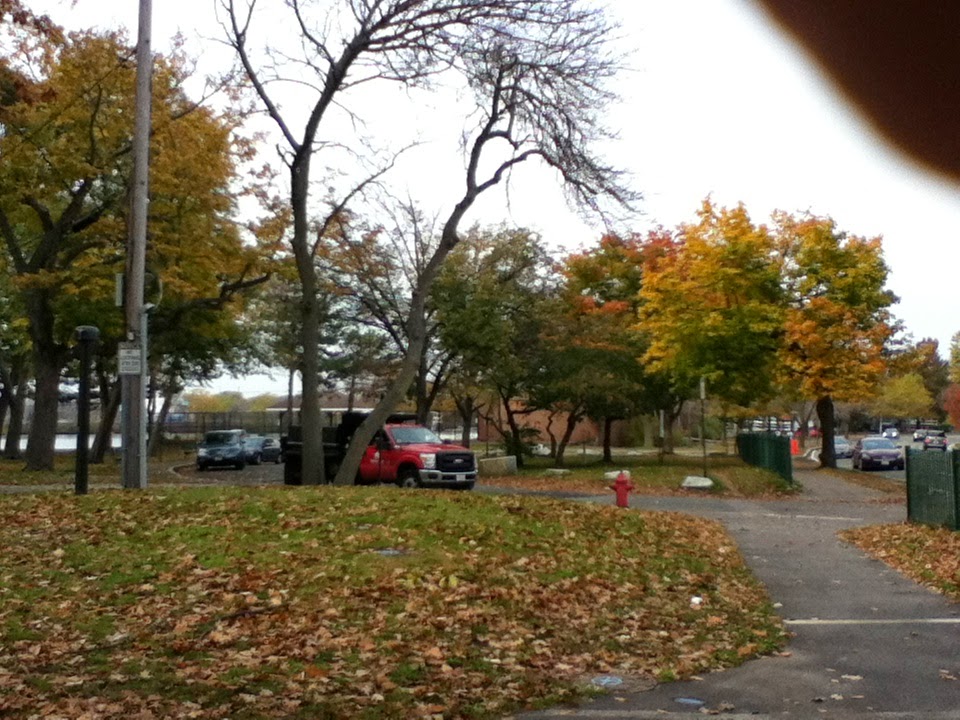 The construction area extends pretty much to the point of the camera.  The black in the upper right is probably the overpass over Memorial Drive.

In this view, the fence around the existing water facility is behind the blue car to the left.  Beyond that and to its left is the building the fake group has spent years saying is the only thing on the Charles River that the politically correct have any business being interested in.  Directly above the fence in the middle left is a sliver of the Charles River.

Again, starting from the west.  This is a photo from the opposite side of Memorial Drive.

The car on the left is at the entrance to the parking lot.  The orange item is on the sidewalk at the entrance.  The asphalt of the parking lot can barely be seen.  Two cars in the above pictures are barely visible right in the middle.  Not really visible, but there, at the far right is the swimming pool support building. 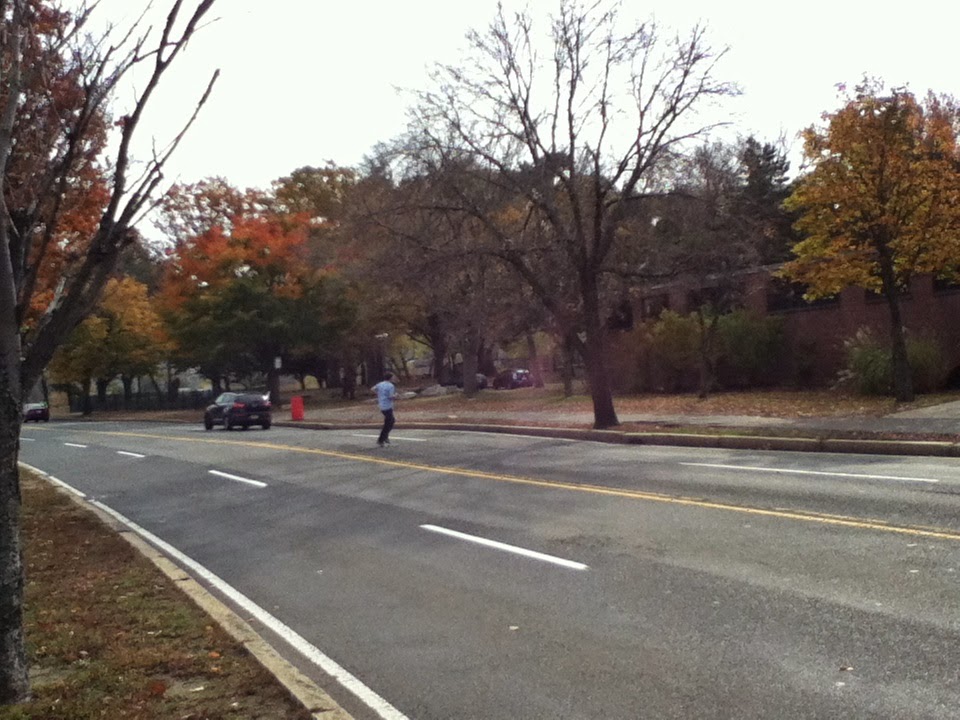 On the river side of memorial drive, clear view of the parking lot.  The fencing around the current water facility is visible between the two cars and the support building.  Remember that the existing location has been declared unacceptable. 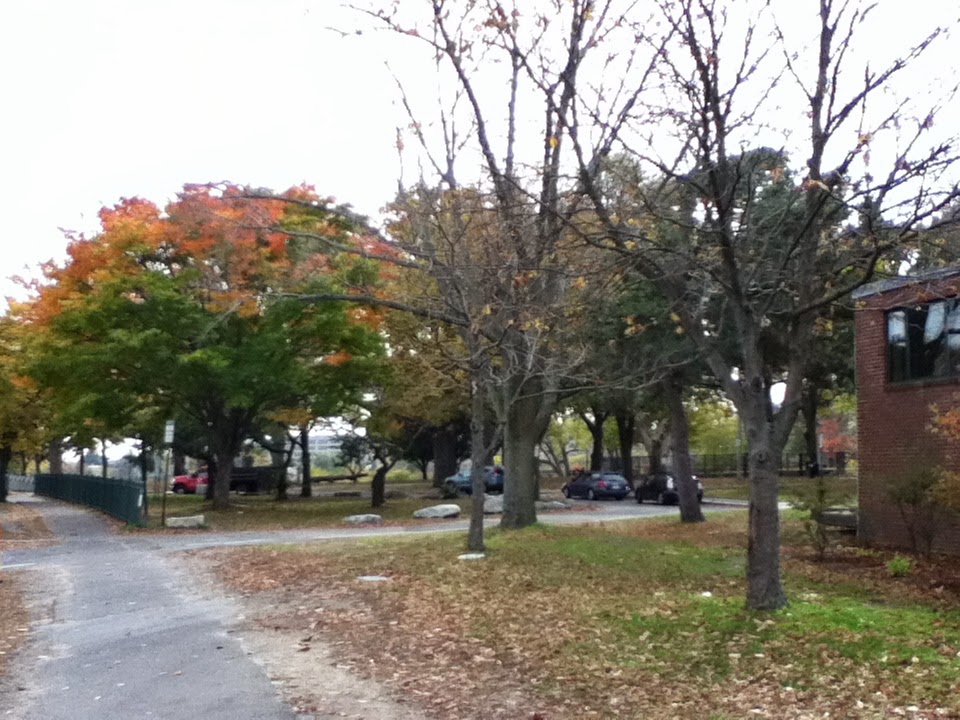 Moving toward the parking area, visible to the left, you can see the current "unnacceptable" location for the water facility, to the right of the parking lot view.  The work zone extends to the left of the building.

Beyond the trees is the little guys' picnic area. 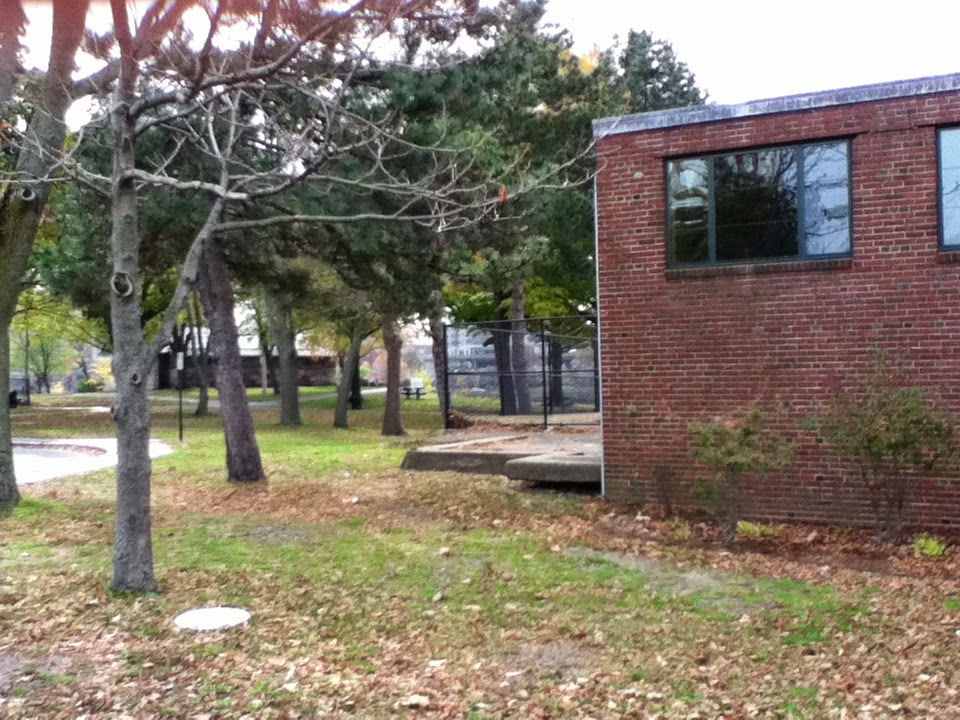 The parking lot is separated from the sidewalk by this fence.  The sign reads:  "Magazine Beach . . . Charles River Reservation".  Beyond the sign is the tiny parking lot and the support building.  This area is all in the construction zone.

The little guys’ picnic area is outside the line. 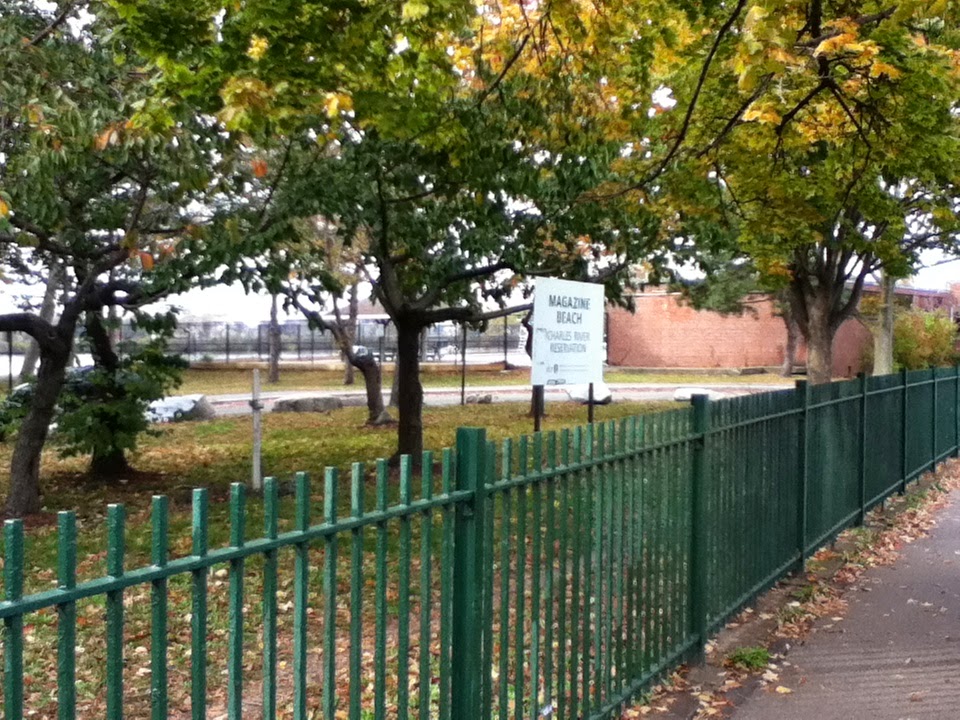 Here are views of this same area from inside the fence.

The first shot is the best shot I have of the picnic area. 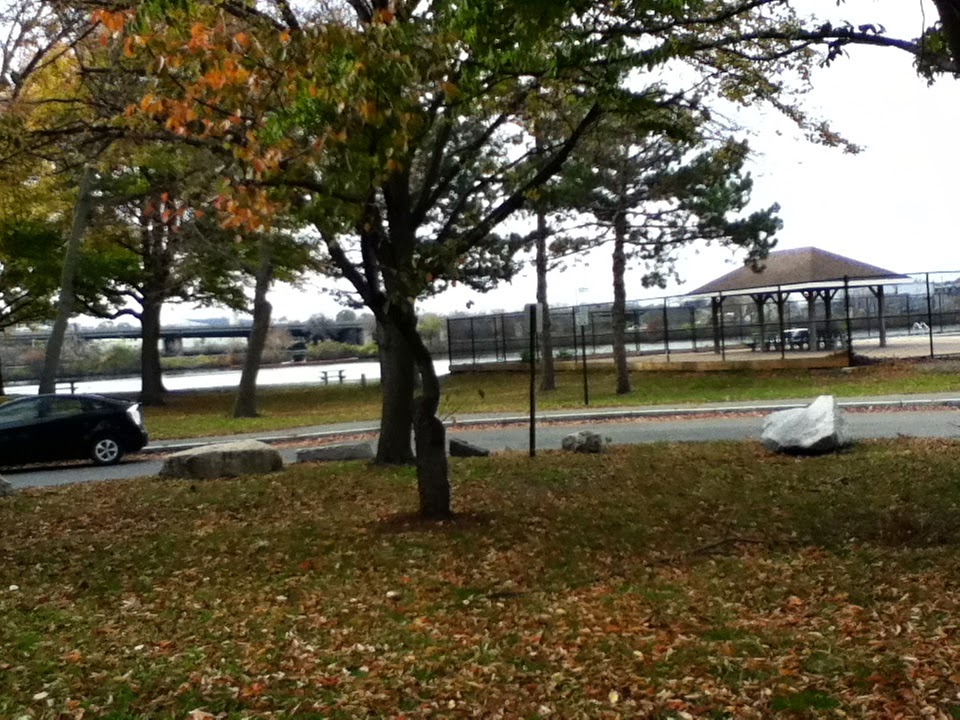 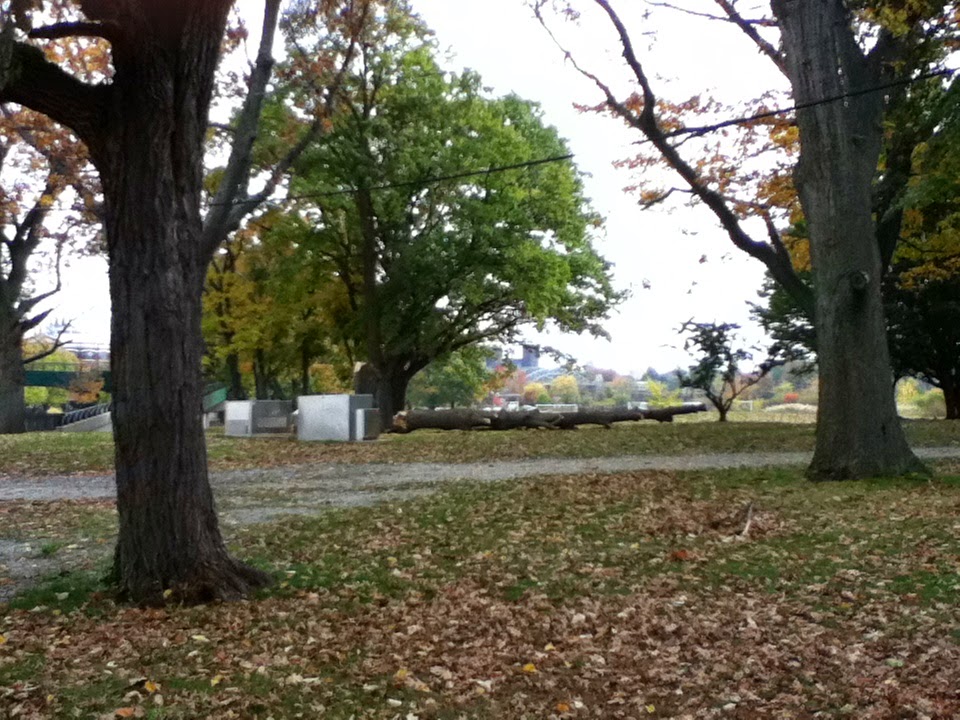 Back at the eastern end, here is, I think, the tree behind the tree slated for destruction.  To its right is the existing and "unacceptable" location of the water facility.  To the left of the tree is the historically unused building the fraudulent group insists is the only thing on the Charles River it is politically correct to look at.  The work area does not extend to the "politically correct" building. 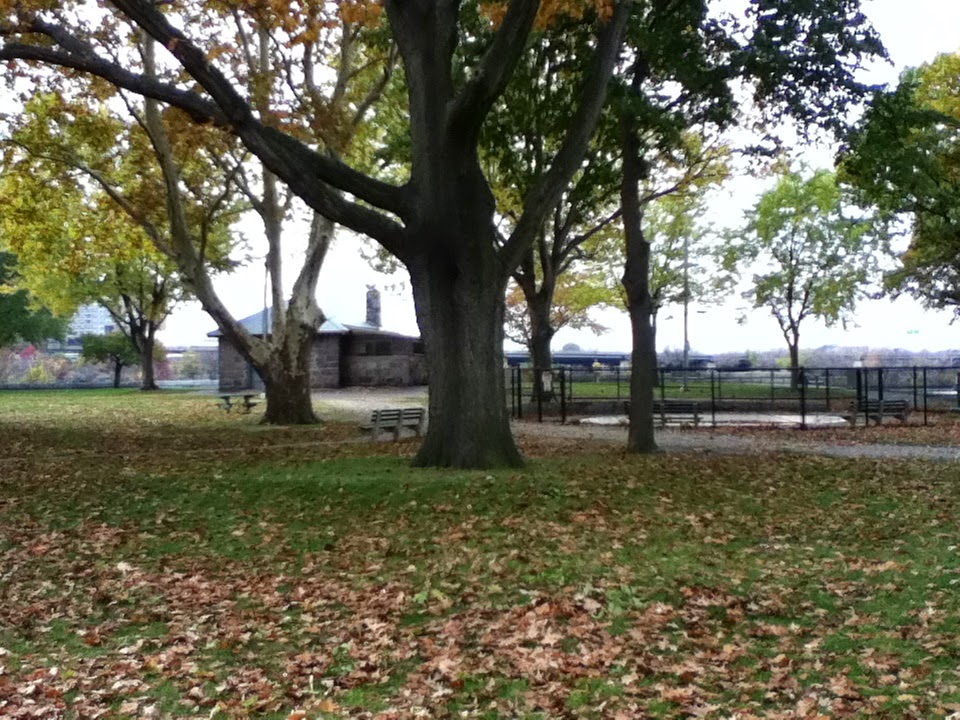 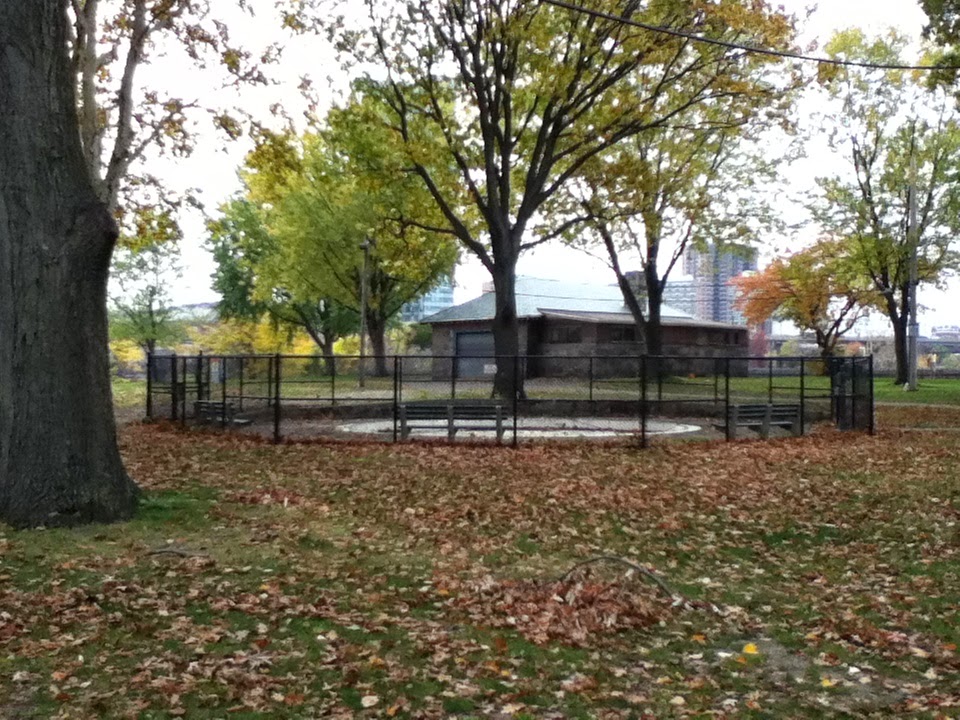 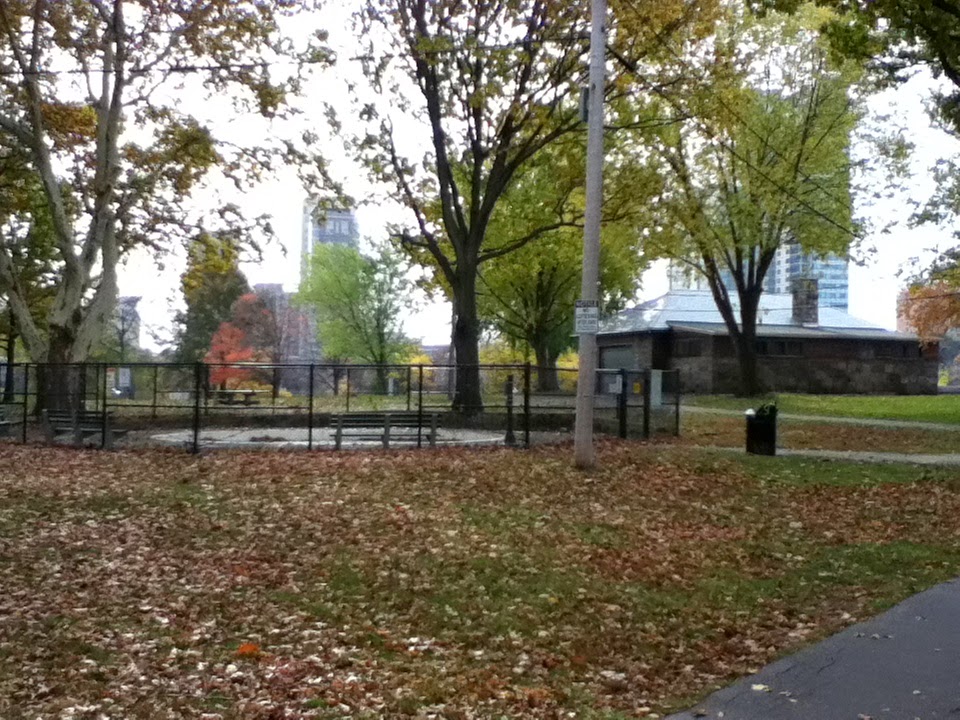 Quoting the leader of the destruction on the Charles, analyzing alternatives:

a. WADING POOL LOCATION: DCR proposed putting it where the wading pool is now, but there was a lot of community pushback because it is surrounded by trees and very shady. The wading pool as always cold and dirty (with leaves)—not a place kids wanted to be.

b. TOWARDS THE FIELDS: Cport neighbor and architect Max Moore suggested putting it next to the playing fields as a bridge between the playing fields and the old growth grove of trees where people picnic. Remember: where there is a water feature, there will also, one day be more of a play area for kids. Max proposes that that would be on the mound beside the playing fields.

c. NEXT TO THE SWIMMING POOL—NIXED. While this would make sense, clustering water features, pool regulations would require that it only be accessible by the main entrance of the pool during pool hours. Not a good solution because on hot summer days the pool is often at capacity and there are long lines to get in. If we add the spray deck to the pool deck, even fewer people will have access.

d. JUST TO THE EAST OF THE POOL: DCR will explore this option. Concerns: People often picnic there and it might be too shady.

3. DCR will explore the cost and feasibility of installing the water feature at the wading pool site, closer to the fields and beside the pool.

Really, WITHIN THE WORK AREA THE DCR HAS ESTABLISHED, the only place “left” for the water facility is the little guys’ parking lot.

A sketch, in fact, is provided in the slides of the proposed new facility on a main road, and the only main road is Memorial Drive.

Aw, golly gee, somehow, they are achieving the destruction of the little guys' parking lot they included in the fine print of the corrupt vote of April 23, 2014.

Just a coincidence, of course.

4. Expansion of use of poisons planned.

Oh, yes, and another coincidence is a declaration to “improve” the grass at the top of the hill.

Translated, that means destroy healthy grass which has been working very well for the better part of a Century and replacing it with sickly stuff which requires the same old poisons and the same old poison drainage system, all of which will, of course, be kept secret until too late, and then objections swamped with silence.

Expanding an outrage done as secretly as possible which should never have been done in the first place.

But they sound so lovely.

Posted by Friends of the White Geese at 8:23 AM