1. Introduction.
2. DCR did not do it either.
a. The Charles River Master Plan.
b. The Cambridge City Council: Rape, murder and not wanting to know where it happened.
c. What business has an environmental agency to be claiming it has no duty to defend the animals under its charge?
3. Coming Next.
4. Prior reports. 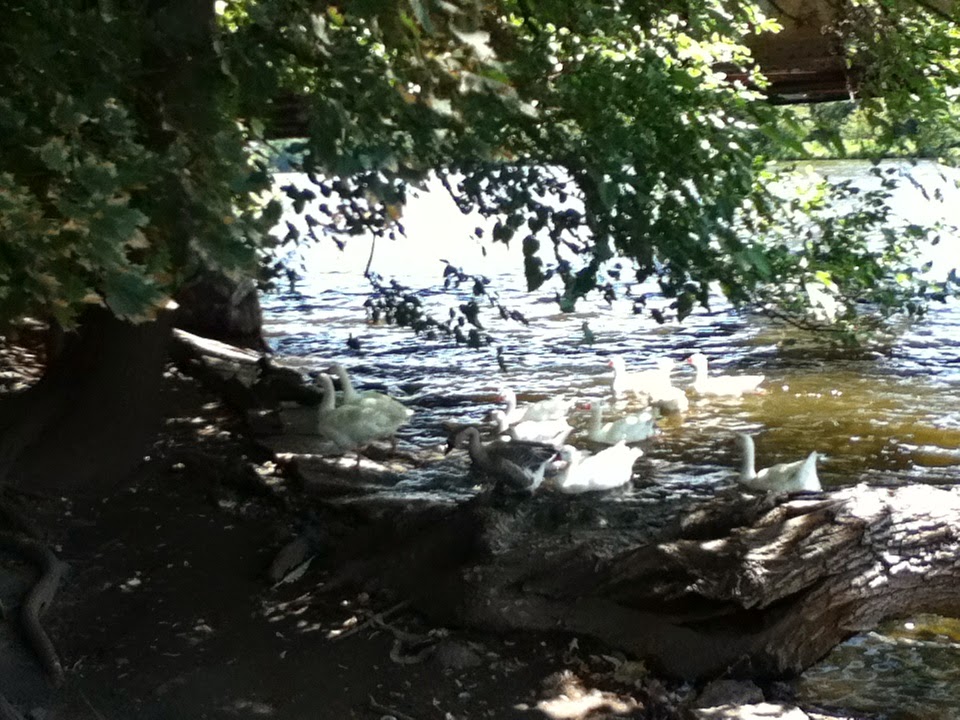 This is the latest in a series of reports responding to lies put out in an art exhibit posted by the City of Cambridge in the art gallery in its City Hall Annex.  I did not dignify the main show.

The key lie is the very clear communication that the DCR has done nothing to the Charles River White Geese, they have just stood by and very happily watched heartless abuse of them.

a. The Charles River Master Plan.

Cambridge, its friends and a lot of other rotters sanctify this document in which a rotten, incompetent organization puts in print its vile goals and procedures.  Since the vile goals and procedure have been written down and everybody knows that government agencies are filled with saints, naturally all parts of their proclamations have a level of infallibility claimed for Pontiffs.

One of the key examples of just how rotten the Department of Conservation and its cheerleaders are is the DCR’s policy on resident animals.

Their goal is to kill them or drive them away.

I have frequently listened to the key DCR manager use this clause as an excuse for his heartless animal abuse.  Then he turns around with the flat out lie that he has no intention to harm the Charles River White Geese.

I see.  So they are just removing protection of resident animals who are their charges, and that has nothing to do with this vile policy?

First of all, they are, in no way neutral on the outrages.

Secondly, they have no business being neutral on the outrages.  .

Thirdly (see the next report), they and their friends are the principal practitioners of this heartless animal abuse.  And they have created copycats who proceeded to graduate to rape and murder.

Then again, the principal figure on the Cambridge side, then City Manager Robert Healy, has been found by court, jury, and appeals court panel as “reprehensible” (Superior Court judge) for destroying a women’s life in retaliation for her filing a civil rights complaint.

And Cambridge's self proclaimed saints on the City Council, after being given blessing to fire Healy by judge, jury, and appeals court panel, saw nothing wrong with his destroying her life either.

b. The Cambridge City Council: Rape, murder and not wanting to know where it happened.

In 2001, about a year after Cambridge and the DCR publicly declared war on the animals living at Magazine Beach with their outrageous plans for Magazine Beach, a nut ran around in nesting season beating to death nesting mother geese.

Decent human beings approached the Cambridge City Council and requested that these self declared saints stand up to the heartless animal abuse.  This was paralleled by larger scale outrages including destruction of nests which was better organized and had the stench of folks close to Cambridge / the DCR.

The Cambridge City Council sat on their hands.  They clearly communicated their blessing, just as the propaganda claims that the DCR has a right to sit on their hands in response to attacks on animals who are their charges.

The Cambridge City Council sent the same clear message that this propaganda says is appropriate for the DCR: a wink and a nod to the vile people / person copy catting Cambridge and the DCR.

That fall, a woman was raped and murdered exactly where the nut had been beating to death nesting geese, and the Cambridge City Council responded with the behavior the propaganda in the display says is ok.

The key guy convicted in the rape and murder had lived in a homeless camp on the Boston side of the river.  He had been looking very suspicious.

The Cambridge City Council showed where they were coming from, and they showed just how vile the claim this show is, just as they showed how vile they realized they are.

The spent and hour discussing the rape and the murder and DID NOT WANT to know where they occurred.

Henrietta Davis, the most environmentally destructive member of the Cambridge City Council during her term, made a boo boo. She mentioned the location of the rape and murder.  She swallowed her words.  (Honestly, that is the only time I have really seen somebody swallow their words.)  She looked around guiltily, and joined the rest of a rotten city council in not wanting to know where this poor woman was raped and murdered.

The location of the rape:

The location of the murder (approximate):

c. What business has an environmental agency to be claiming it has no duty to defend the animals under its charge?

Well, after all, they have declared a policy to kill or drive away all resident animals.

They have made heartless animal abuse their basic policy.

A partial record of the attacks on the Charles River White Geese by this vile entity, along, of course, with the City of Cambridge who, as usual, like a good fellow rotter is claiming sainthood, for the DCR.

Posted by Friends of the White Geese at 5:39 PM