Some of the trees on the Charles River the Cambridge Machine is fighting to destroy.

1. Some of the trees to be destroyed.

Below are photos of the excellent grove of trees at the Memorial Drive split, maybe half a mile or so east of the Destroyed Nesting Area of the Charles River White Geese. These are from 2011 and 2012, all in March. I know I have some photos in season, but, this is what I have come up with this time.

The rest of the destruction this time at least doubles the destruction, but these trees are by far not the largest trees being destroyed. They, in fact, fall in the bottom half of the trees subject to destruction.

The larger trees are so large and are collected together so deeply that it is impossible to give a group shot of them, and individual shots do not communicate much. 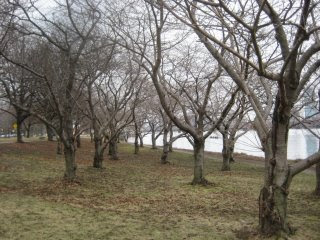 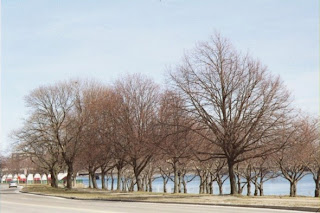 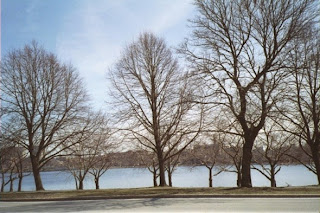 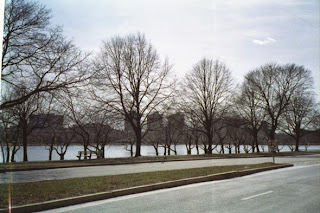 I have full details of the planned destruction.

The euphemism is Historical Parkways.

The state bureaucrats tried to destroy these trees with Obama moneys. They lied that all the trees they were destroying were diseased. The lie was proved by the paperwork filed with the Cambridge Conservation Commission.

But the state bureaucrats do a lot of lying.

And this is only part of the planned destruction. Total destruction coming up runs between about 400 and 600 trees.

I have a new scanner which I am trying to figure out. If I figure it out, I will scan my copy of the destruction plans covered by Governor Patrick’s bond authorization proposal, Massachusetts House Bill H3332. I will pass them on on this page.

2. The bureaucrats want to kill off all animals.

The destruction comports with multiple past and planned outrages including fine print in the bureaucrats’ “Charles River Master Plan” which calls for the killing of or otherwise removal of all resident animals on the Charles River Basin. There is a caveat: if they cannot get away with killing all of them, they will settle for killing whatever they can get away with.

Starving the Charles River White Geese and walling them off from their food at Magazine Beach exactly comports with the rest of the outrage.

3. Trolls and the Cambridge Machine.

In the meantime, I will try to minimize my reference to each and every piece of nonsense coming out of the Cambridge Machine.

That is, after all, part of the game.

In Internet parlance, this is called a Troll.

Then the trolls have found their truth.

The Cambridge Machine is an embodiment of trolls. However, like the 45 year rent control advocate who only suckered for one lie, it is impossible to tell the difference between the knaves and the fools.

So I am just talking the Cambridge Machine and whether the particular representative is a knave or a fool, I could care less.

Reality is the destruction they are fighting for by telling people to look at everything else, whether they know it or not.

That is the explanation for the destruction of these hundreds of trees:

IF YOU LOVE THE CHARLES RIVER, YOU WILL LOOK AT NOTHING EXCEPT ONE BUILDING WHICH HAS NOT BEEN USED IN THE LAST 80 YEARS.

Bizarre yes, but that is the Cambridge Machine’s explanation for the many, many, many terrible things their friends have done and are doing.

Although they did take a ten minute break and indulged in a corrupt vote which went through the form of supporting the doubling of the damage their friends did to Magazine Beach, including a highway project which is part of the Governor Patrick funds for destruction of those hundreds of trees. This was April 23, 2013.

The prior meeting, in January 2013, featured a meeting long discussion in which a whole bunch of folks objected to their destructive proposal. So the January 2013 meeting action was deferred to the February 2013 meeting which was conducted on April 23, 2013, driving away the folks who were there in January. The corrupt vote was in a very complicated writing which was passed out at the beginning of the ten minute discussion.

Since then, they have returned to telling folks to look at the building which has not been used for 80 years which they want to convert to retail, and they do not want anybody to know anything about the Charles River except for that building.

After all, do they not insist on telling people, non stop, that they love the Charles River? Reality is irrelevant.
Posted by Friends of the White Geese at 5:26 PM