These photographs have been delayed in posting because I have been working on the fake neighborhood associations latest hypocritical meeting.

This is the core of the rottenness, both of the fake neighborhood association and of the city government and state agency for which they are fronting. 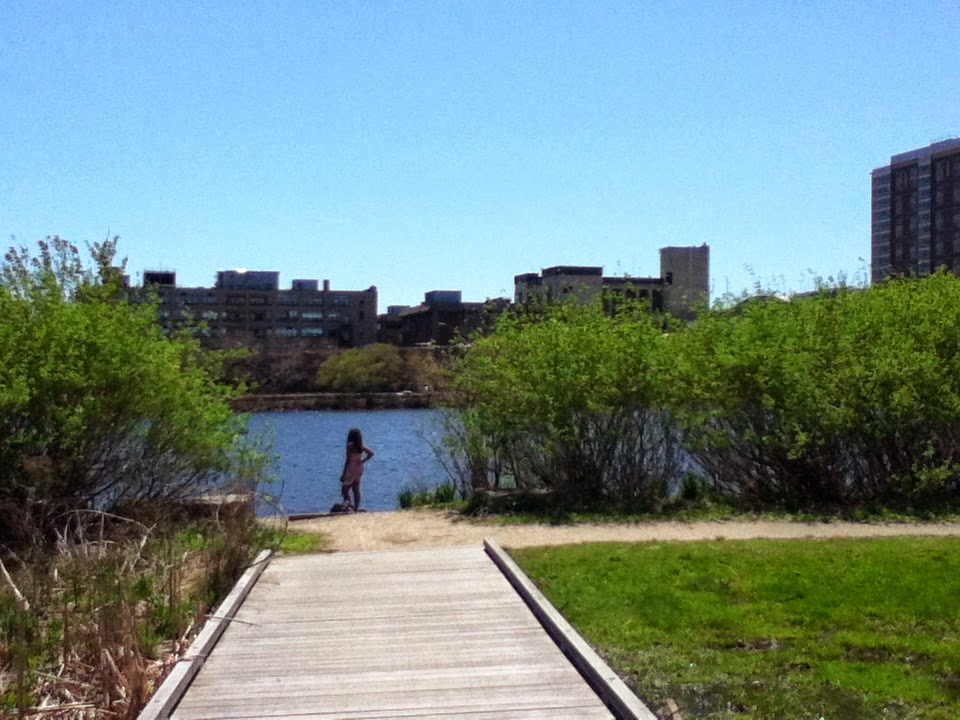 The building straight ahead is Boston University’s School of Fine Arts.  To its right is a building which is closer in its bulk to the Charles.  In my photo analysis of the Green Line A route, a small building behind Fine Arts is the only structure which could be in the path and it is avoidable.

The picture is taken atop a fake bridge.

The woman in the pictures is an adult woman.  The introduced vegetation has to exceed 12 feet in height and perhaps as much in depth. 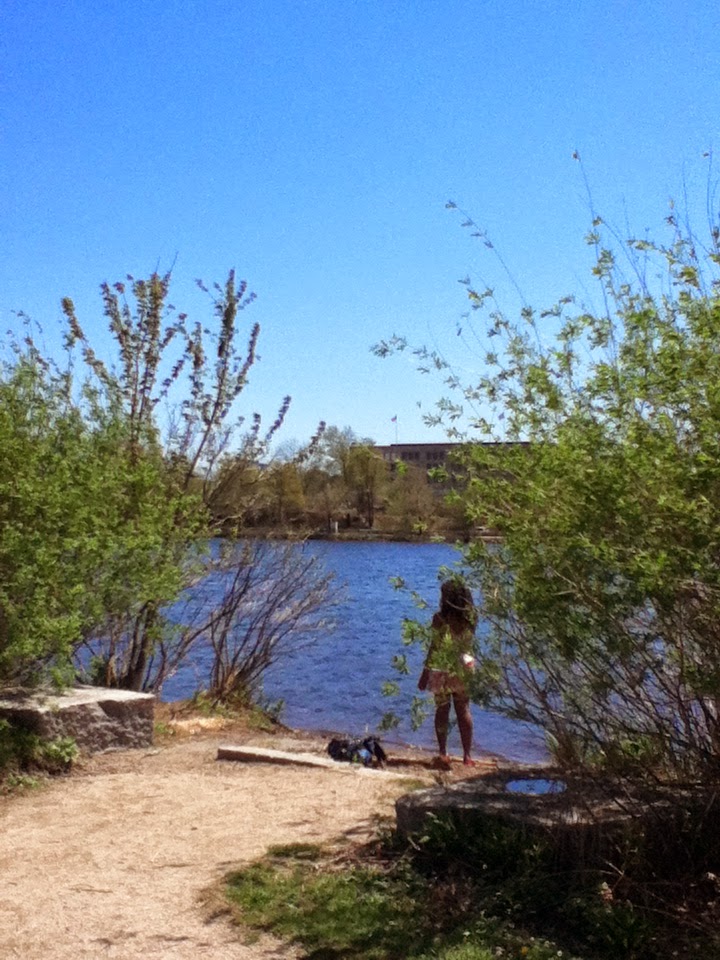 During the first stage of destruction, the Charles River White Geese used to happily come ashore and swim in a fake pond under the fake bridge and the monstrous wall of introduced vegetation was not there.  They swam in the pond and grazed on the grass beyond it, much less than the food which was taken from them, but

The cruelty of the people we are dealing with being what it, the monstrous wall has been allowed to get bigger and bigger and other introduced vegetation has been stuck where they were grazing, plus the fake ponds were taken from them.

The entire riverfront has gone from a lawn to the river to a situation where the river cannot be seen.  It is blocked from any real access.  Starvation has been bragged about by the manager who keeps saying he intends no harm.

3. The lies and omissions.

This introduced wall of vegetation fit onto the sanctified Charles River Master Plan as follows.

It does not.  This is yet another of the heartless lies of the Department of Conservation and Recreation being kept in place through the corrupt behavior of the Cambridge Machine.

The DCR’s master plan called for a “lawn” to the river.

The falsely named Charles River Conservancy did a media event celebrating the lawn to the river.

Recently elected Cambridge City Councilor Marc McGovern went into the Cambridge Chronicle bragging that the project would improve the playing fields for recreation use.

This wall took away their food and their nine month home.

Grass which had survived the better part of a Century was destroyed and replaced with sickly stuff which needs poisons to survive.  EXACTLY THE DEFINITION OF INTRODUCED VEGETATION.

IF YOU ARE DEALING WITH DECENT HUMAN BEINGS.

Councilors McGovern’s beloved playing fields were reduced in size to create an artificial drainage system which is only needed to drain off poisons which should not be in there in the first place.

4. The fraud of the Cambridge Machine.

“It is anti Charles River to discuss the problems of the Charles River.  It is altogether improper to discuss anything except for a building which has not been used for 80 years that we want to turn into a commercial project.'

5. The fraud of the Cambridge Machine, phase 2.

The saintly people from the DCR have a lovely project to discuss with you.

And we will give you more of this lovely, environmentally reprehensible stuff we have been telling you to ignore.

Don’t worry about the new bike highway.  We do not know that the bike highway is associated with the destruction of hundreds of trees between the BU Bridge and the Longfellow Bridge.

And we will do our best to keep you from knowing that.

It was possible that their meeting could reject the DCR’s lovely project.

I won’t go into this in detail again.

The public meeting was in January.  Action was delayed to the February meeting which was conducted on April 23, driving away the folks who were interested.

A horribly complicated motion with fake protections was kept secret until ten minutes before the end of the meeting.

It was rammed through with a room consisting of Machine activists and folks who could care less.

8. And tonight they are defending the environment in Boston.

Posted by Friends of the White Geese at 3:20 PM