The biggest oddity is the inclusions of photocopies of entire pages in our letter of June 6, 2017 to the Cambridge City Council.  Double clicking will greatly increase these pages in size.  These photocopies are taken from the file on the June 6, 2017 letter on the Charles River White Geese webpage at http://focrwg.com/agenda1.html, pages 28, 29, 30, 34 and 35.  Please look there for better reproduction if necessary.   In the City Council hard copy, these photocopies occupy nearly full pages.  That reproduction works quite well.

The crossings comment refers to the map and analysis I provided of public streets the Cambridge City Council wants to really mess up with passenger trains crossing them.  Here is a copy of that graphic. 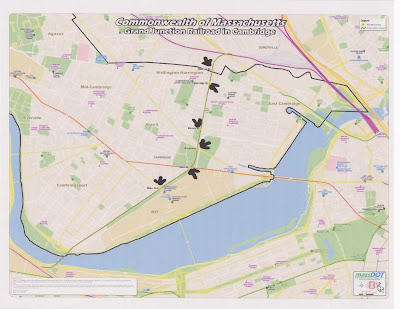 Over the last century, such rail / highway crossings have been constantly  separated from highways in communities with responsible leaders.

As is not at all unusual, enlightened behavior in the real world is strikingly opposed to practices in  the City of Cambridge, MA, USA, where enlightened words combined with reactionary realities are too often the norm, as with the SECRETIVE desires of the Cambridge City Council for the Grand Junction and for the public streets of Cambridge.

Here are Phil’s comments with limited edits to fit this medium without changing his meaning.

Good to see you were able to sort out the salient points from the mass of chaff in the I-90 reports etc. I noticed the other day that the bridge that carries Mem Drive over the Grand Junction has a jerry-built (temporary?) repair just like those made to the overpass, a lattice work of heavy steel columns and supports propping up the roadbed. I hadn't noticed this before but then I haven’t been over to the goose meadow in some time. 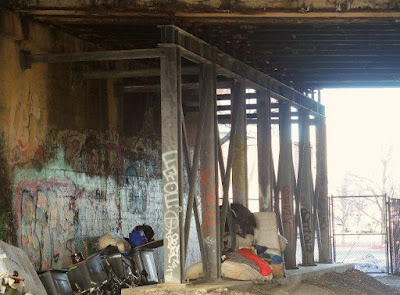 It also occurs to me that the width of the underpass would determine whether the right of way could be used for both rail and vehicle traffic. Originally the bridge and the right of way accommodated two tracks. It would be an impossibly tight fit to get two lanes of traffic plus the rail through this pinch point. I suppose they could pitch the whole thing as an “improvement” to the Mem Drive bridge which does seem to need replacing. The overpass continues to deteriorate too in spite of the repairs a few years ago. More brickwork falls off it every day, it seems. There’s even a netting under it where the rotary passes underneath to catch falling debris!

Your point about the grade crossings is well taken. You can gauge when rail traffic is coming from the sound of the engine’s horn as it successively crosses Cambridge St., Main St. and Mass. Ave., and the crossing at Ft. Washington. I notice that 5 PM, the height of the rush hour, is usually when Conrail shunts a few cars north on the line. Yesterday I saw an old GP24 pulling a couple of MBTA cars and one of the brand new passenger locomotives to the repair shop. It crossed the bridge with a great squealing of bearings and chugging. Two thousand horses under the hood, quite impressive. Daily commuter trains on the line would require full grade crossings and many delays. And they wouldn't be able to move through such an obstructed corridor at speed either.

Here are  the cottonwoods in 1994.  These are the beautiful specimens on the closed NECCO spur  which were recently destroyed by MIT.  I suspect the ones at Magazine Beach seeded from them.  They produce millions of wind born seeds that blow everywhere. 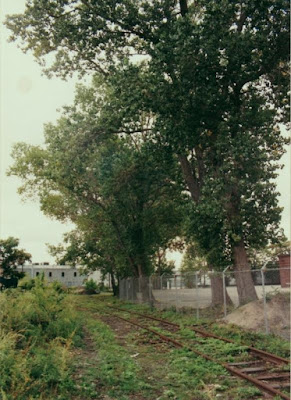 A pivotal point in the discussion of the 2003 MBTA plan to created an I90 off ramp to Cambridge was the extent to which the Memorial Drive underpass would be widened.

Following are a few samples from our June 6, 2017 presentation of trees at Magazine Beach the Cambridge City Council wants to destroy, along with DCR filed plans.

As near as I can gather, the City Council’s presiding officer seems to consider the DCR’s PUBLICLY FILED PLANS to be lies on the part of the DCR (or us?).  All the time, of course, WHILE PLAYING A CON GAME ON THE VOTERS.

As demonstrated in the photos below, these PUBLICLY FILED plans INCLUDE flat out lies FROM THE DCR.

It is very difficult for the City Council’s presiding office to blame these lies on us.  BUT HE PUBLICLY HAS CALLED US LIARS.

The “three trees” shown in the first plans for destruction repeated below, are in reality are ten trees, as shown in our photographs of them, but then the Presiding Officer calls us liars, so we must be lying that the DCR’s “three trees” are TEN. 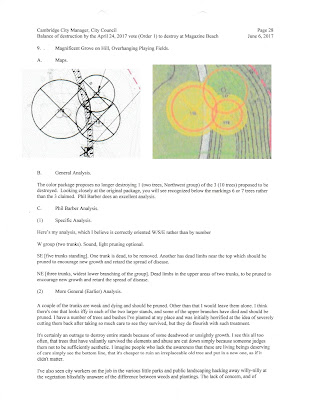 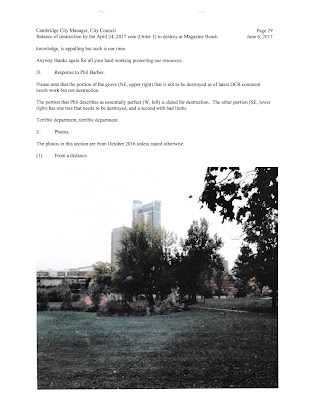 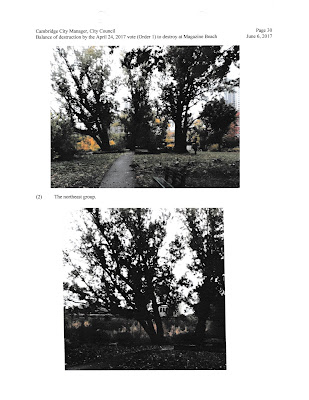 Double clicking should greatly increase the apparent size of these photoed pages.  These photos and the below photos may be directly viewed on the Charles River White Geese webpage at http://focrwg.com/agenda1.html,

This is, of course, the magnificent grove which dominates the western end of the playing fields.

Two dead trees to the right (west) were destroyed during the past few months.

This is the most visible part of the excellent park across from Magazine Street.  Note that the DCR and the Cambridge City Council wants to destroy all but one of these trees at the same time as destroying the environmentally responsible parking lot heavily used by people not attractive to the top 1%. 4. Destruction after the City Council gave its blank check. 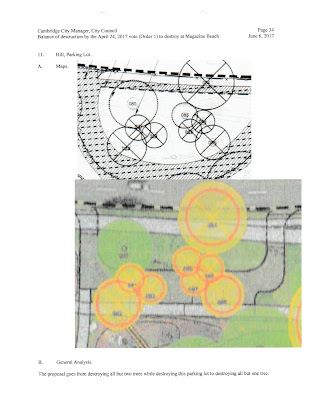 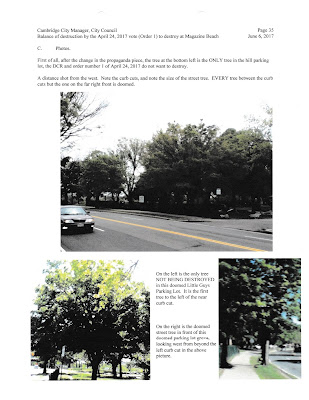 4. Destruction after the City Council gave its blank check.

After the City Council gave the DCR their blank check in Order 1 of April 24, 2017, and after our June 6, 2017 letter, the DCR, on behalf of the Cambridge City Council’s blank check, destroyed two street trees next to the MicroCenter Parking lot WHICH WERE NOT EVEN ON THE DESTRUCTION PLANS. 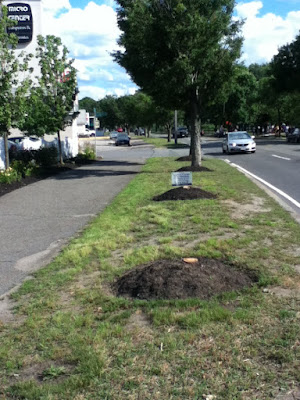 As I recall, the Cambridge City Council’s presiding officer calls this “lying.”

Posted by Friends of the White Geese at 4:06 PM