Recently, I have passed on reports on the Charles River White Geese crossing the ramp north of their ghetto / destroyed nesting area to get to food.

I have taken a bunch of photos of the soon to come impenetrable thicket and have been trying to put together (1) a transition package and (2) a package comparing this situation to the outrage at Magazine Beach. The reality, however, is that I am sitting on my photos too long.

Here are photos of the first large scale visit I am aware of by the Charles River White Geese into the plantings for the impenetrable thicket. I previously reported this foray when I saw it. After that, they went further up the hill and then started crossing the ramp looking for food because they are being starved.

The first photo is of the cruel reality forced on the Charles River White Geese by the people who are deliberately starving them and then destroyed almost all the ground vegetation in the ghetto where they have been confined, rather than the mile long habitat centered on the BU Bridge which has been their home for most of the three decades they have lived on the Charles River.

The fake group is fighting for all this outrage, as much as possible, by keeping it as secret as possible at the same time as spouting non stop lies of concern for Magazine Beach. 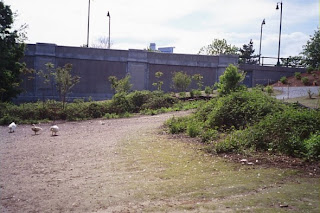 The large wall straight ahead is the BU Bridge.

The dirt area used to be ground vegetation until it was destroyed by very cruel people. The large native vegetation to the right occupied most of this area until very destructive people destroyed it. Straight ahead is a second patch.

These two pieces are the ONLY ground vegetation which have not been destroyed between the BU Bridge and the BU Boathouse two block to the east.

You see three Charles River White Geese in the middle left eking out what little they can.

I had been hoping the green coloration in the middle of the dirt was grass. It now looks more like moss.

I have previously published an areal (probably satellite) photo of this area during the off season showing it filled with vegetation.

The grey substance to the upper right is the beginning of the environmentally destructive highway which has been condemned by responsible bureaucrats. I have state plans showing it extending through where the three geese are and running under the BU Bridge in the water to Magazine Beach. I believe I have posted them.

This highway has been described as “underpasses” by the destructive people who were condemned for its environmental destructiveness. The extension to the east would destroy hundreds of trees including decimating a magnificent 104 tree grove at the Memorial Drive split.

The following photos are from June 2. 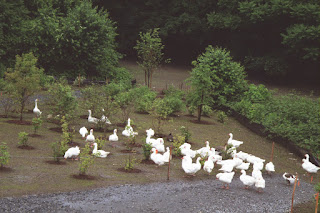 This is a group of the gaggle hesitatingly entering the middle of the soon to be impenetrable thicket. The bushes to the right are the north side of the native bushes in the above photo. Most of these are Emden Geese. The goose to the far left with his head straight up and a long neck is a White China. The goose to the far right with black markings is the offspring of goose who is clearly white with either a Toulouse or a White China with vestigial Brown China markings.

The grey stuff under them is the highway I showed above. 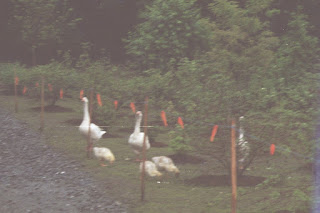 This photo is taken from the eastern leg of the highway. The goose on the left could be the White China I pointed out above. The three little guys are adolescent goslings who are leading the foray into the soon to be impenetrable thicket. Three adults are shown. The third is partially hidden by a bush. The Charles River White Geese have very close families. When goslings are being raised, a third goose will join the parents and act as a babysitter. Babies are always accompanied by three adults for protection. 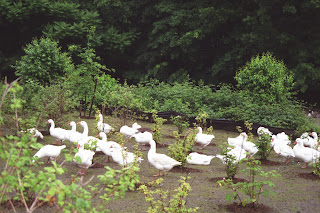 Another view of the gaggle group in the middle area, taken from the north. 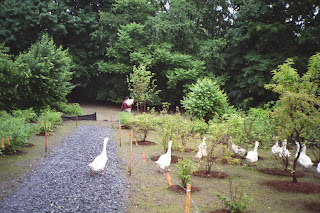 This is the western leg of the highway. The man straight ahead with the bag on his shoulder and the reddish shirt is one of the volunteers of the Charles River Urban Wilds Initiative. They have been keeping these beautiful animals from being starved by Cambridge, the state bureaucrats and the rotten people running lying about “concern.” He is coming with food. The Geese are following him for the food. 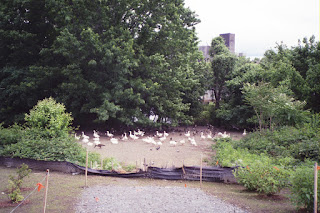 This is a photo from the next day taken from the highway shown above.

The grey is the eastern leg of the introduced highway. Left and right closer to the camera is the soon to come impenetrable thicket. Left and right on the other side of the plastic barrier are the small numbers of undestroyed native bushes.