The Green Line (streetcar / light rail) Spur Harvard and the Cambridge Machine are Trying to Kill?

1. Boston Area Where the Green Line (streetcar / light rail) Spur should go and which Harvard and the Cambridge Machine are trying to overload.
2. Massive Tree Destruction, Terrible past record, previous post on the Mass Transit Needs / Plans.
3. Lesser importance to Harvard but very destructive to the Charles River.


1. Boston Area Where the Green Line Spur should go and which Harvard and the Cambridge Machine are trying to overload.

This report assumes basic knowledge. Supporting materials are in the latter part of the report. The photos in this section were all taken on April 18, 2014.

My most recent communication on this matter, my letter to MassDOT, goes into preliminary detail on the responsible Green Line spur to Harvard’s future Medical School location which the Cambridge Machine and Harvard are trying to kill by overloading a key part of the area where MassDOT is rebuilding the Massachusetts Turnpike (I90), at http://charlesriverwhitegeeseblog.blogspot.com/2014/04/to-massdot-harvard-is-trying-to-kill.html.

I will probably supplement this letter with a letter to MassDOT which parallels this report.

The key is that the area can only hold so much. Therefor the Cambridge Machine is fighting openly and otherwise to overload the area and prevent a responsible Green Line streetcar access while pushing for a horribly expensive Red Line deep bore tunnel for access which would be “made necessary” because a responsible Green Line spur would be prevented because of the overloading of the area covered by the following phots.

The area of the Massachusetts Turnpike under attack by Harvard and the Cambridge machine is shown on Boston University’s map of the area. This is the area which should be used by a Green Line streetcar spur providing transportation to the Harvard Medical School. Broader scale satellite photos are included at the end of this report is the summary provided there. 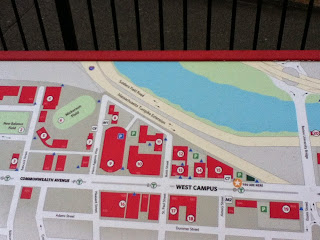 In the middle of this photo, on the right of Buick Street, building numbered 12, is the only building which could possibly be impacted by Green Line construction, and given the ability to rearrange the Massachusetts Turnpike, this is unlikely. The area possibly impacted is one story high and looks like it is used for parking.

The grey area at the top of the map is the railroad yards / Mass. Pike area that MassDOT is rearranging in this project. 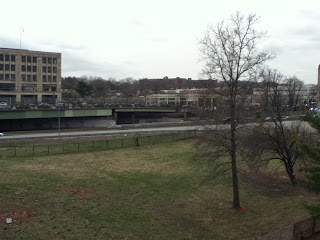 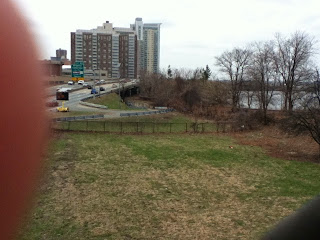 The large buildings straight ahead are residence halls behind Agannis Arena. They approach the Massachusetts Turnpike but are separated from it by a road which is the extension of Buick Street. The photo was taken through a woven fence which blocks part of the photo, probably along with my finger. 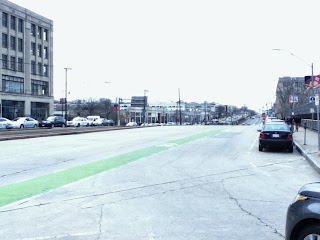 To the left is the Cadillac Olds building, now owned by Boston University, and very visible in the left of photo 0644, above. 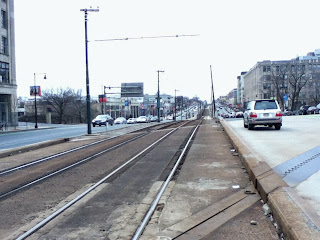 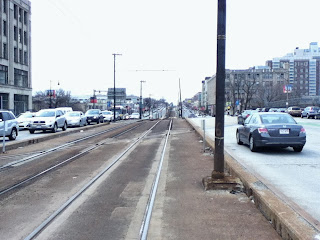 This is the portion of the streetcar area closer to the BU Bridge.

Behind the camera at the intersection with the BU Bridge is a signalized intersection which is being reorganized as part of another highway proposal. Those signals will need to be coordinated with streetcar use.

The sort of switch needed is primitive railroading. Maybe a mile straight ahead is Packard’s Corner. The streetcar tracks we are looking at are designated as the B line. The letter B comes from the fact that there was a similar switch at Packard’s corner by which the B line went left and the A line went straight ahead.

Not at all complicated.

In fact, building a Green Line spur to support Harvard’s new Medical School would fit in the Green Line nomenclature as a new A line. 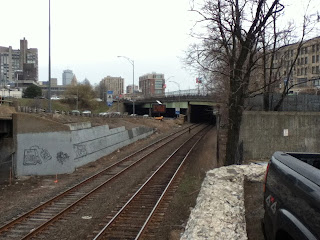 The black structure to the right is a wall abutting parking for the College of Fine Arts, building 15 in the BU map above. 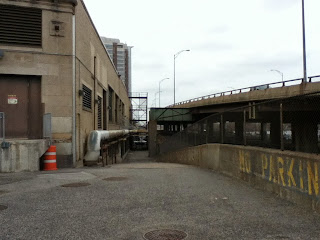 The structure on the left is the College of Fine Arts. The structure on the right is the Massachusetts Turnpike. The railroad tracks are to the right of the concrete wall. The support, if it were not likely to be torn down, could hold the Green Line spur. The brick building is the residence halls behind Agannis Arena which I mentioned above. 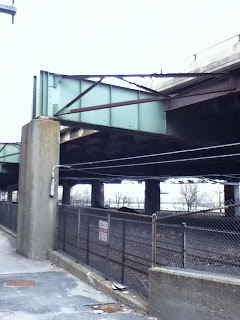 Closer view of the support. 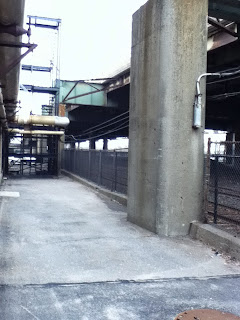 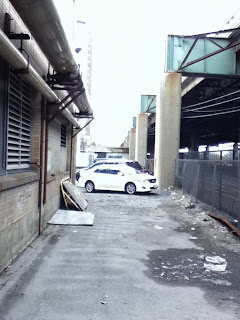 Following supports behind the College of Fine Arts. Notice the amount of room available for a Green Line spur on air rights. 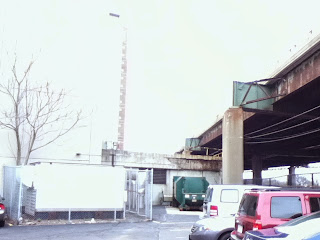 Here is the one spot where a Green Line Spur on air rights might possibly have to go over a BU building under the current Mass.Pike configuration (building numbered 12 on the BU map). This is a one story structure abutting very large buildings. Perhaps air rights could be achieved. Perhaps the Mass. Pike could be moved. Perhaps this small portion of the structure would have to be demolished and relocated. 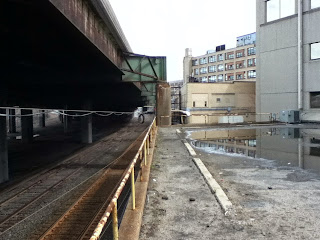 Photo from the top of building 12.

Note the support for the Mass. Pike straight ahead and the railroad below. It is entirely possible the Green Line spur could be constructed without impacting this building.

This support was seen from the opposite side in prior photos. To the right is the segment of the College of Fine Arts shown in those photos. Above it is the main building. 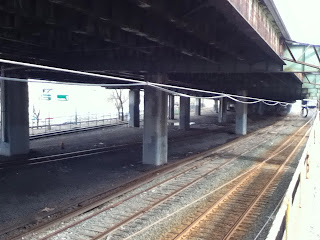 The railroad tracks, supports and Mass. Pike to the left of the prior photo. 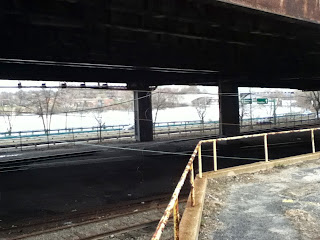 Another view swinging further left. The Charles River is in the background. The BU Bridge can be seen to the right.

The tracks visible under the far end of the Mass. Pike structure are the tracks which go over the Grand Junction railroad bridge. 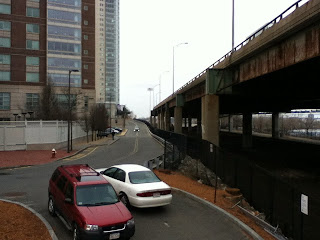 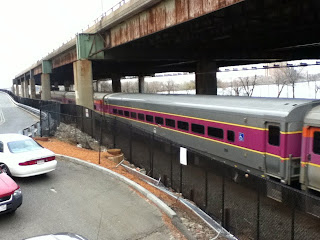 Current use. The train to Worcester from Boston. 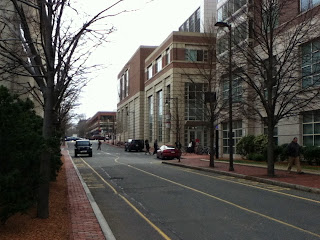 Looking up Buick Street next to the location of the previous photos.

The two or three story brick structure in the distance is on the far side of Commonwealth Avenue. The building to the immediate right is the residence hall structure. 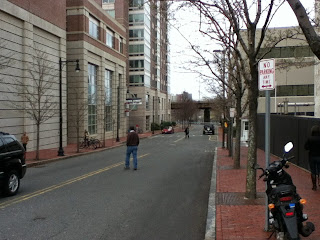 The opposite view on Buick Street. The Mass. Pike is the raised structure at the end of the street.


Please note from the BU Map above and from the satellite photos below that this is the end of the tight area. After this, you are in Harvard’s property / the railroad / Mass. Pike area which is the main part of the MassDOT consideration.

This is the latest in a series responding to the Massachusetts Department of Transportation (MassDOT) public meeting on April 10, 2014, concerning rebuilding of the Massachusetts Turnpike near the Charles River.

I anticipate I will be sending a very similar report to MassDOT.

The Cambridge Machine so far has achieved acres of government destruction of the irreplaceable Alewife Reservation while lying it was defending it. Total destruction is likely. The Cambridge Machine is fighting for the continuation of and expansion of outrageous destruction on the Cambridge side of the Charles River including heartless animal abuse. Bond authorization for destruction of hundreds of trees between the BU and Longfellow Bridges is in Governor Patrick’s house bill H3332 under the euphemism, historical parkways. Whether Governor Patrick has been meaningfully informed is not certain.

I have posted the plans for the H3332 destruction of hundreds of trees between the BU and Longfellow Bridges at http://charlesriverwhitegeeseblog.blogspot.com/2014/04/tree-destruction-plans-charles-river.html. I have posted my objections to a Cambridge Machine activist praising a fake neighborhood association. My post includes a key aspect of her record. It is posted at http://charlesriverwhitegeeseblog.blogspot.com/2014/04/massdot-meeting-concerning-charles.html.


3. Lesser importance to Harvard but very destructive to the Charles River.

One, taken from above the Grand Junction Railroad Bridge shows a green traffic sign in the background. 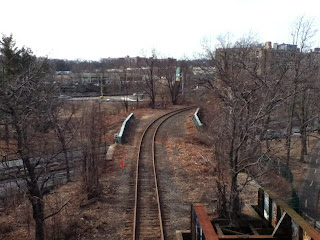 Look straight ahead of the track and slightly to the right. The sign is a green sliver.

The others show the area being torn down by MassDOT with that traffic sign very visible. 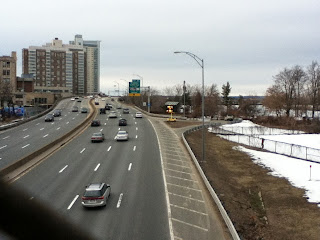 The traffic sign is straight ahead. Note the pull over road to the right.

Here is the pull over road with the Grand Junction railroad bridge in the background. 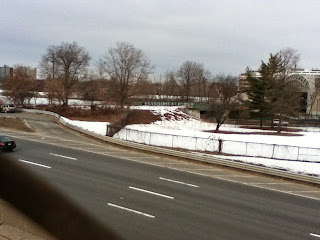 The highway you see in all of these photos is slated to be torn down according to the April 10 meeting. These photos were taken in February 2014 and previously published on this blog.

Here is the relevant part of a satellite photo submitted in a 2006 environmental report by the local public transit authority.

In the upper left part of the photo is main part of the area being rearranged by the MassDOT rearrangement of the Massachusetts Turnpike, the future Harvard Medical School, among other uses by Harvard / its friends.
Posted by Friends of the White Geese at 2:42 PM