The Charles River White Geese: Stirrings of Spring in a Destroyed Riverfront

On March 10, 2012, I took a number of photos of the Destroyed Nesting Area of the Charles River White Geese and of a nearby area showing the corrupt environmental situation on the Charles River in Massachusetts, USA.

Here are a few of these cherished long term residents making the most of their lives under attack by corrupt governments.

This photo is of the top of a hillside above the Charles River. The tracks are the grand junction. This is part of the area whose ground vegetation has been destroyed since the Charles River “Conservancy” started destroying the environment for the Massachusetts Department of Conservation and Recreation.

Since destruction of their world by corrupt governmental bodies, the Charles River White Geese have frequently nested in this barren area and even next to the tracks.

This shot and the following shots are of areas that the Cambridge Pols lie about through omission when they brag about their pride in Magazine Beach but do not want to know about what their controllers have done at Magazine Beach during the last twelve years.

The photo was taken from a railroad bridge which is part of the Memorial Drive complex. 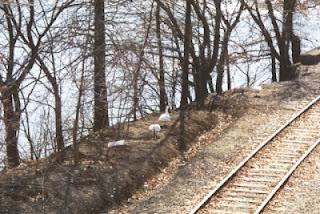 This is a panoramic view of an artificially created wasteland at the Destroyed Nesting Area. At the bottom can be seen white figures which are the Charles River White Geese eking out what is now a miserable existence in what was beauty.

The green lining the darker colors are the tiny portion of ground vegetation that has not been destroyed by the DCR and CRC since the CRC started destroying in 2003.

The photo is taken from the top of a staircase illegally installed by Boston University in 1999. BU denied doing the work for six months until they were condemned for it by the Cambridge Conservation Commission. They immediately started bragging about their illegal work and blamed that six months of lies on their president’s secretary who was not fired. 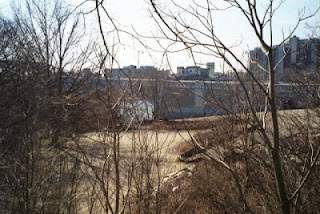 Another formerly lush area destroyed since 2003. The white figures are the Charles River White Geese. At the top is the Grand Junction Railroad. To the right is the area shown in the immediately previous photo. Boston University on the opposite, south, side of the Charles River may be seen at the top. 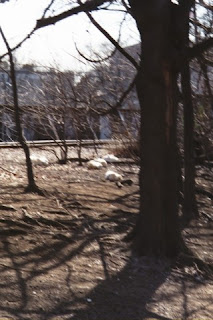 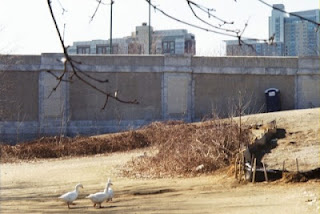 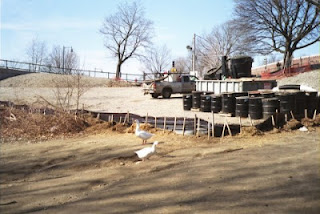 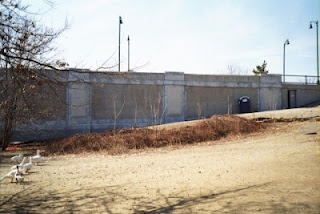 This area is against the Charles River in the middle of the southern boundary of the Destroyed Nesting Area. It, like almost everything else, used to be lush and was the location of many nests. At the top of the photo is the Grand Junction Railroad Bridge above the Charles River. 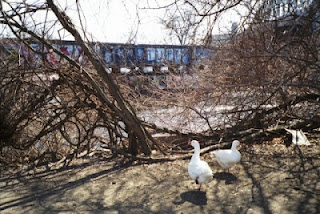 This photo is corner to corner in the Destroyed Nesting Area. The Charles River White Geese may be seen at the far corner. Behind the camera is the corner where the BU Bridge intersects with the on ramp to Memorial Drive east. The black strips are plastic boundaries set for the construction zone. To the left is the area which was destroyed for no purpose whatsoever. To the right is the area next to the BU Bridge where those vehicles should be parked. The blue is the Charles River. At the top is Boston University’s buildings on the south, far, side of the Charles River. 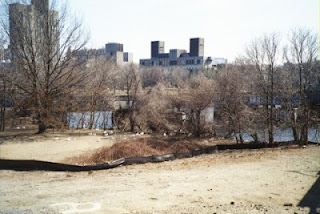 Photo taken pretty much from the same location as the immediately prior one. This is of the leg of construction destruction for which there was no viable excuse. The vehicles previously shown are shown more realistically. Note all that empty space. The blue toward the top is the Charles River. Below it is the Grand Junction Railroad. The Charles River White Geese can be seen under the trees. This last area was the subject of the first few photos. 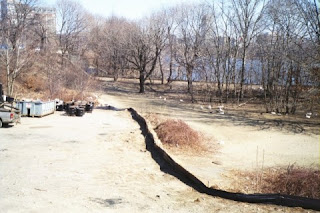