Mishka has forwarded me seven photos of the destruction zone on the ramp from Memorial Drive to the Longfellow Bridge heading south.

I returned to Cambridge to go to law school in 1970. I think I recall admiring this grove then.

The first group of photos are of trees slated for imminent destruction (red paint), May 23, 2013.

I have recently done some good documentation of the corruption of one of the Cambridge Machine’s most currently destructive fake groups. This destruction is part of their filth. That is the purpose of Company Union organizations. Then there are the hundreds of trees their corrupt practices have fought to destroy between here and the BU Bridge, the 22 trees targeted on the Cambridge Common, the acres of needless destruction accomplished at Alewife, soon to be expanded to possible total destruction.

The rottenness in Cambridge, MA, USA, is the Cambridge Machine in combination with a strikingly bad city government with all lying about reality and telling well intentioned folks to chase their tails.

State or local is irrelevant. The rottenness in the City of Cambridge is omnipresent. 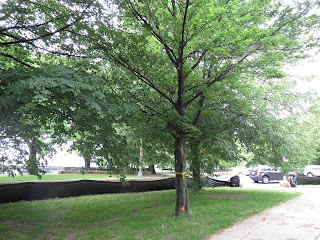 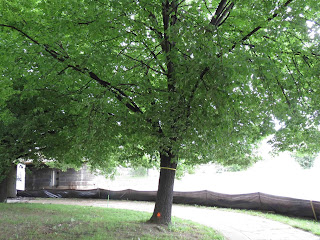 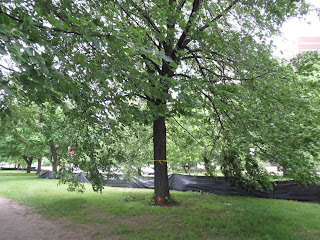 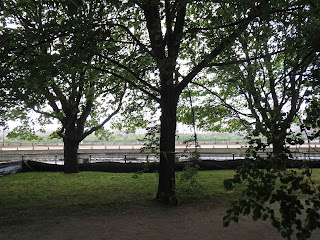 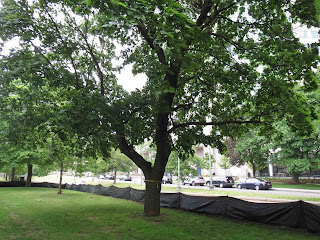 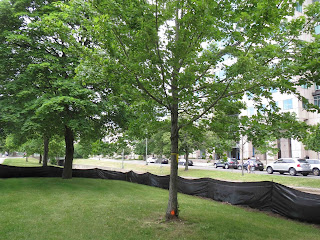 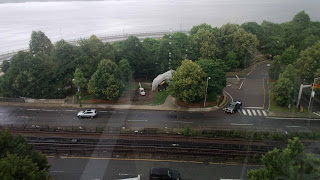 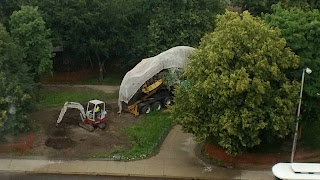 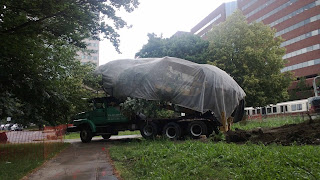 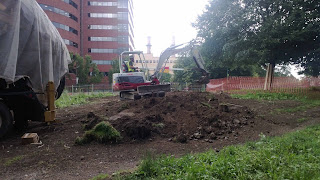 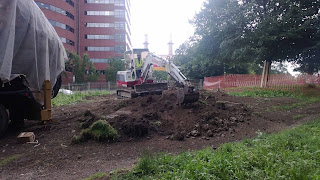 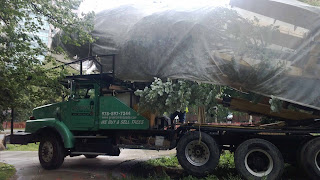 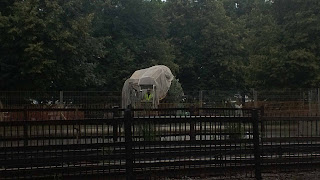 In the early May we noted that a number of trees near the Cambridge
side of the Longfellow Bridge were marked with red paint and
yellow and green tape.

Later in May we contacted the bridge project officials, who indicated
that

As a follow-up I wrote the following e-mail to the project
representative on May 30.

I have a follow-up question: are there any plans to hold
a public meeting or a Chapter 87 hearing in connection
with those trees?

I think a number of people who live or work in that area
are concerned about tree loss. So if people representing
the Longfellow Bridge project share the details and
reasons which make this tree loss unavoidable, it would be
very helpful.

Unfortunately, the bridge project so far did not respond
positively to this request. Instead they've send an e-mail
which contained the tree removal plans as an attachment, but
only had the following as an explanation:

"The tree protection and removal plan has been presented at numerous
public meetings and hearings during the previous phase of the project,
including general public information meetings and hearings for the
Environmental Assessment, Environmental Notification Form and Notices of
Intent. MassDOT has also coordinated extensively with the Department of
Conservation and Recreation in preparing the plan and understands the
value residents and visitors place on trees. Every effort has been made to
minimize the number of impacted trees through careful design. A landscape
architect and a certified arborist are part of the project team.

MassDOT's Design Build team White-Skanska-Consigli is transplanting eight
trees on the Boston side of the bridge and nine on the Cambridge side.
These trees are marked with green ribbon. Transplanting will be completed
by the end of June. Tree removal will begin after the 4th of July. Trees
that will be removed during Phase 1 of the project are marked with a
yellow ribbon and paint. Trees that will be removed in a later phase are
marked with a yellow ribbon only. Please refer to the Tree Protection and
Removal Plan for details."

That's not good enough. First of all, some people who were present
during a number of those meetings say the issue of the trees never
was discussed (perhaps it was discussed at some other meetings, but
there is no way to verify that). It's not enough that some plans are
on file somewhere.

Then there is a clear requirement of Chapter 87 Section 3 of
Massachusetts General Laws to hold a meeting such that a notice
of such a meeting among other things is placed "upon the tree at least
seven days before such hearing". In this case we see no evidence
that a notice of any of these meetings was posted on the affected trees.

I think the project should present its plans for public scrutiny
in a manner prescribed by law, rather than making an attempt to
avoid extra public scrutiny.

I did not mention the June 19 fiasco here, but it is certainly
relevant in that it gives people extra grounds not to fully trust
the statement that "Every effort has been made to
minimize the number of impacted trees through careful design".

We certainly appreciate the efforts the project is doing to
protect many trees. At the same time, the removal of
trees which happened on June 19 is very difficult to justify,
and increases the desire of people to scrutinize the situation
further in this case.

A few days ago, I sent out a letter to the Cambridge Chronicle praising the Executive Director of the Cambridge Conservation Commission for responsible behavior at the Destroyed Nesting Area, standing up to state destructiveness.

To no surprise, that praise did not make it into today’s Cambridge Chronicle.

She did print a long editorial publicizing a irrelevant change in process. You publicize process, that gives the impression you are concerned with reality.

No printing of reality.
Posted by Friends of the White Geese at 2:17 PM