A Photo Record, September 2011, Destruction of the Charles River environment by Massachusetts

Not long after that, I posted a portion of those photos showing the excellent grove perhaps a mile to the east of the BU Bridge which Cambridge and the Department of Conservation and Recreations intended to destroy.

This is the balance of the photos.

I want to thank the folks who saved Bert for posting two photos showing the environmental outrage. 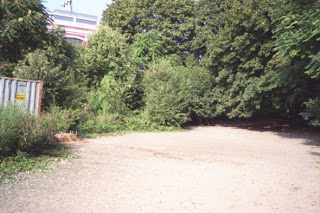 This photo is of the eastern part of the Destroyed Nesting Area.

The structure to the left is in that part of the BU Bridge construction zone which simply cannot be justified.

At the top of the picture is a Massachusetts Institute of Technology owned building which formerly was a Ford Plant and, more recently, was part of the Polaroid complex.

Those major trees to the right are excellent but threatened by the multiple projects targeted for the area.

Straight ahead is undestroyed vegetation going up the hill supporting the on ramp to Memorial Drive which is the northern boundary. To the left can be seen additional very healthy ground vegetation which is the very small portion not destroyed by the DCR acting through the Charles River Conservancy and other agent.

The dirt would be just as fruitful if it were not for the destructiveness of the DCR and its agents. 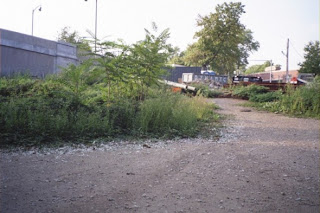 On the left is the BU Bridge, at the top is Memorial Drive.

There are two tiny areas of ground vegetation between the BU Bridge and the BU Boathouse which have not been destroyed by the DCR and its agents.

On the right is the western portion of the small remnant which I showed in the prior picture.

On the left is other area which has not been destroyed. Sticking out of the vegetation are two or three undestroyed trees. I published a photo of this area in the spring, thinking that the state had shown some decency by planting these trees and trees I saw in the other undestroyed area. I was wrong. It was not decency. It just was that, over the years, the DCR and its agents, destroyed, and destroyed and destroyed. The only area they did not destroy was the area they planned to destroy in the BU Bridge project. They missed some.

The trees sticking out of the ground vegetation are the bare trees I showed in my photos in the spring. They are healthy.

The very wide path in the middle goes to the corner entrance illegally created by Boston University for the DCR in 1999. The geese did create a narrow path in this location going up to the ramp to get food under Memorial Drive. The vast majority of this destruction, once again, is DCR and its agents. 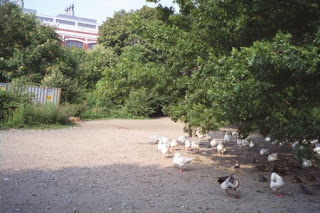 This is a more distant view of the first photo.

To the right, under the largest tree in the Destroyed Nesting Area is a number of the Charles River White Geese. They used to be able to rest in natural vegetation, but the sick situation in Cambridge, MA, has destroyed that natural vegetation. 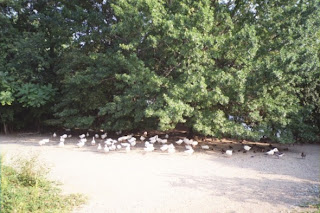 This gathering of part of the gaggle under that excellent tree is photographed from the BU Bridge itself. 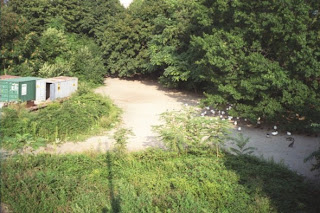 This photo, also from the BU Bridge is of the area shown in the first few photos with that major tree and the partial gaggle also included. 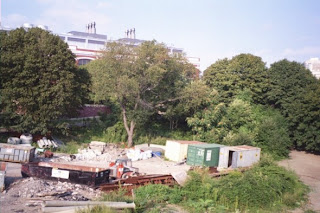 Also from the BU Bridge. This is the portion of the construction zone which was totally unnecessary. The silvery shed is visible in the first few photos.

At the top is MIT’s Ford / Polaroid plant. Below it can be seen the bricked edge of the Memorial Drive overpass.

Immediately below the construction zone is the eastern of the two tiny patches of ground vegetation.

Look at how excellent this stuff is in comparison to the patches of dirt artificially and sickly imposed on the environment and its animals by this horribly irresponsible state agency working in close coordination with the City of Cambridge whose behavior has been called “reprehensible” by a civil rights judge.
Posted by Friends of the White Geese at 5:32 PM