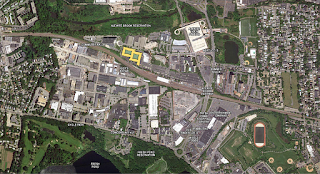 Last night, March 14, 2012, I caught a further presentation by Richie McKinnon and his team concerning their project at Alewife. This is the project slated for the massive parking lot where flood storage should go for which Cambridge and the DCR claim they have destroyed the core Alewife reservation.

Their destruction will protect against the worst possible storm in two years (“two year storm”). Alewife has seen two instances of 50 years storms in the past 20 years. When the victims find out they have been lied to with promises that seem to be promising flood protection, the powers that be will be oh, so sorry. They will have to continue with destruction of this irreplaceable virgin woods and its animals.

Richie’s project and adjoining parking stretching along commuter rail line to Alewife Brook Parkway could readily provide the needed flood protection but it would be very much needed to have his project built above flood protection to do the job as well as possible.

Richie’s presentation was to a group named North Cambridge Stabilization Committee. I was either a founding member or an early member of this group, many years ago when I lived in North Cambridge.

Richie had spoken with them before concerning his plans and was providing further details.

Prior posts of value may be seen at:

My analysis of his project:
http://charlesriverwhitegeeseblog.blogspot.com/2012/02/alewife-richie-mckinnon-true.html.

I have not checked the quality of the collection but the NCSC people say that all the documents are posted at http://northcambridge.net/. Just click on 160/180 CambridgePark Drive.

The parking lot where he is building is to be owned by him during construction. They already have a managing company / subsequent owner lined up to take it over when it is ready for occupancy.

This lot is the one that can be seen on the parking lot photo. The lot, however, is part of a package owned by the owner of two existing office buildings and the development is being coordinated with those buildings. That owner is the current owner of the lot where McKinnon is building and the parking lots between there and Alewife Brook Parkway.

We had an almost tense moment when he explained that. I thanked him for correcting my understanding. The reality, however, is that the other owner who owns all the parking lots seems very clearly to be the important entity and that owner owns everything, subject to development plans.

Even if ownership is separated, having different owners on two parts of this massive parking lot which should be used for flood protection would be no big thing to a responsible city government.

B. Nature of Use.

There was extensive discussion of traffic problems associated with the existing development.

Residential uses create much less traffic problems. My interpretation of the discussion is that the big reason this is a residential project is to minimize traffic impact.

The building will have a shell of residential uses on the first floor facing CambridgePark Drive and the destroyed Alewife reservation. The rest of the first floor will be parking for cars and bicycles. The presenter had a good grasp on local bike highways.

They anticipate bikes will access Cambridge to the east through an underpass under Alewife Brook Parkway that is part of the Alewife Station Complex. That could be a good analysis, much better than trying to cross the heavily traveled Alewife Brook Parkway. But bicyclists, lawless or not, could readily cut over to Rindge Avenue across from CambridgePark Drive. It could be done legally as pedestrians. They could then go through the neighborhood that way.

Their engineer distinguished between two different types of protection from water impact. I still do not understand his distinction, but fortunately another person in the room followed up and got the key details out.

There is one kind of flood protection in two rectangular tanks on the commuter rail side of the project. There is also a massive flood gathering arrangement built under the parking.

These two items are crucial. These items should be greatly expanded to be part of a regional flood protection system, but this can only be done now as part of the construction of the building.

Corresponding flood protection can and should be put under the massive parking lot toward Alewife Brook Parkway which will be retained by the principal developer.

This group is a breath of fresh air after dealing with the “Cambridgeport Neighborhood Association” and the Charles River “Conservancy.” The problem individuals are a much smaller number, but, even so, they are enough to dominate well meaning neighbors who mean well.

The interactions are an excellent example of how the Cambridge Machine works in a group with minimal but real connection.

The meeting was conducted by the number 2 member of the group. He claims to be a zoning expert. His zoning expertise seems to amount to going to the City Manager’s people and learning what is his opinion.

A second key Machine type is a “transportation expert” who is visible in the Machine groups pretty much uniformly to the extent the Machine groups are working on development issues. He always sounds great. He is always part of the resulting, bad effort.

In a public meeting presentation, he did, however, provide me with the key issue concerning the extremely irresponsible development of Alewife.

The deal amounted to chasing their tails at various meetings while Richie presents his plan to people working for / appointed by the Cambridge City Manager.

Also visible was a couple I know from when I lived in North Cambridge. Disclosure: I dated their daughter for awhile.

The woman in the couple has been very belligerent that they did what they could to prevent the outrage at Alewife. They sued city employees. Neither can meaningfully explain why, in the years they have been attempting to protect Alewife, they have not and will not talk with the Cambridge city council.

The reality is that there could be no knaves in this group. The knaves could just be the city employees / Cambridge machine members pulling the strings of a very tiny minority. It is really irrelevant whether we are talking knaves or otherwise. The problem people have long, bad records and, as usual, they present themselves as experts.

I spoke with almost all the local people individually. I showed them my photos of Alewife as destroyed as of a month ago. I pointed them to this blog for further copies of those photos and gave them the standard FOWG informational flier that leads with Alewife on one side while devoting the full other side to the Charles River.

There are good people in this group. They are exactly the type of people I have worked with in so many major victories. I hope they can free themselves of the Cambridge Machine and put pressure where it belongs, on the Cambridge City Council.
Posted by Friends of the White Geese at 8:56 AM