1. Historical Observations by a Friend.

Phil Barber follows up on his report of a few days ago with the following:

I also found little traces of history in the soil disturbed by the work along the river. It was my ambition many years ago to work in archaeology, which I studied at college way back when. So I am very much drawn to any and all freshly turned earth as well as the study of history. The workers struck a shell midden; there’s an area where many fragmented oyster shells are scattered on the surface. Oysters were an enormous popular food in colonial and 19th century times but because there are no worked artifacts among the shells I saw, their origin is almost certainly pre-European. The native people summered in this area, harvesting the abundant shellfish and waterfowl, retreating to the sheltered highlands further inland during the winter. It’s easy to forget they lived here in harmony with the ecosystem for upwards of eighty centuries. The river was immensely wider too, from (more or less) where Brookline Street is now, all the way to Washington Street in Boston’s South End. (I grew up not far from Dover Street there, which was the narrow neck of land by which the peninsula of Boston was attached to the mainland before all the landfills.)

I also found late nineteenth century landfill along the river. This is first spotted by the abundance of coal ash, and on closer inspection you'll see broken glassware and crockery and the odd bit of organic material if it is from below the water table. The original plan for the filled in area of our city was like Boston’s Back Bay, but the economic collapse of 1893 ended that project, just as the fall-off in trade in the War of 1812 sabotaged the original Cambridge port scheme.

I notice a lot of local street signs commemorating events of that war, which was very much like our more recent imperial wars, and one that most people don’t realize the U.S. lost. New southern and western Congressmen, called the "War Hawks," carried the midterm election of 1810 by campaigning for the use of federal military power to drive Indians off the land their constituents desired for expansion of their slave labor plantations. They also sought to conquer and annex British Canada, Spanish Florida, and Mexican Texas. The navy scored some unprecedented successes against the Royal navy but the ground war was a fiasco. The failure of American arms was reflected in the Treaty of Ghent that ended the war. It addressed none of the grievances that had allegedly caused America to declare war. Britain, weary of her two decade-long war with France, agreed only to restore the pre-war status quo, and promised to abandon her Indian allies in return for a U.S. agreement never to invade Canada again. The real losers were Native Americans, who lost their most powerful international ally and from 1815 onward would fight on alone in a doomed bid for survival on the land they had cared for so long.

On the Charles River, the best friend of the Charles River White Geese back in 1999 to 2000 when I started to get really involved was Native American, LittleBrook, who, for a number of years, had been providing them with nourishment supplemental to the environmentally responsible grass which was their primary food source.  The responsibly maintained grass had been there for the better part of a Century, until it was destroyed for poison drinking grasses by Cambridge and the Department of Conservation and Recreation in the 2000s.

LittleBrook was with the Charles River White Geese pretty much whenever I visited, until he got a bicycle to commute from his home in the Allston neighborhood of Boston.

Two days after LittleBrook got the bicycle, he was hit by a car.  Last I spoke with him, he had been out of formal hospital / nursing home care for years, but he was not strong enough to return to his beloved friends.


Here are photos from the last time I saw Little Brook at the Destroyed Nesting Area, with his beloved friends during a session in which I showed around representatives of the Massachusetts Department of Transportation: 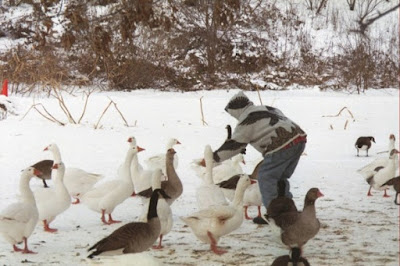 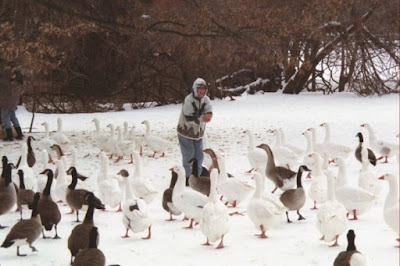 I invited him, and he brought munchies.
Posted by Friends of the White Geese at 1:28 PM