I have sent the following communication to each member of the Massachusetts Legislature:

I understand H4009 has been reviewed by the Senate and returned with changes possibly to a conference committee.

I have been unable to get through the public records to get further details.

I strongly encourage you to delete the following language from section 2c, item 3890-7020, copying from H4009:

$32,000,000 shall be expended to complete the planning, design and
812 construction of Phase II of the Historic Parkways Initiative along the section of the Memorial
813 Drive between the Longfellow Bridge and the Boston University Bridge, also known as the BU
814 Bridge, in the city of Cambridge, to construct and make improvements to pedestrian pathways,
815 bike and paths, and to make betterments to landscaping; and in accordance with the MassDOT’s
816 Healthy Transportation Directive;

The history of this language is outrageous.

This involves the destruction of hundreds of trees between the BU and Longfellow Bridges.

The Department of Conservation and Recreation has been fighting for the destruction of these trees for about a decade.  In 2009, it sought Obama anti Great Recession moneys.

When interviewed by the Boston Globe, the agency said it was destroying diseased trees.  The diseases trees were destroyed years earlier, and filings so indicate no diseased trees.

Destruction plans are posted by me at http://charlesriverwhitegeeseblog.blogspot.com/2014/04/tree-destruction-plans-charles-river.html.

Lobbying for this destruction was organized by a falsely named group which calls itself the Charles River “Conservancy.”  They obtained support for “underpasses” objected to by MassDOT and have since claimed that destruction of these hundreds of trees is “incidental” to the underpasses.

The language in that bill was vague.

H4009 replaced the original bill.  It is quite explicit and provides $32 million for the destruction while clearly authorizing but not specifically mentioning the destruction.

This destruction of hundreds of trees is associated with the DCR’s reprehensible policy of killing off or driving away all resident animals.  They have implemented this sick policy by the ongoing deliberate starvation of the beautiful and cherished Charles River White Geese who would be major victims.

This proposal has been kept way under the level of visibility because it is so destructive and such a waste of money.

I hope you will delete this and corresponding Senate language from the final approval.

Thank you very much

Robert J. La Trémouille
Individually and as
Chair, Friends of the White Geese, an Attorney General recognized non profit since 2001. 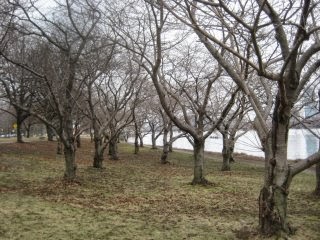 All Cambridge City Councilors may be reached at council@cambridgema.gov,  Their phone number is 617-349-4280.  I have previously responded to their nonsense that they can save the world and praise destruction on the Charles River, but they have no business objecting to destruction coordinated with the Cambridge city government.

It is a very major weakness, but the lack of response to complaint concerning their destruction on the Cambridge Common is not encouraging.  Plus their ignoring my prior passing on to them in hard copy the plans for Memorial Drive destruction is very much discouraging.  But there are a number of them who are very insistent on the lie that they are pro environment.

Of major importance with legislators is a widespread contempt for the Department of Conservation and Recreation and its destructiveness.  Cambridge, MA, is a distinctive entity which is in sync with the problems that the DCR embodies.
Posted by Friends of the White Geese at 5:20 PM