Charles River: A visit to the Destroyed Nesting Area, and Related

Charles River:   A visit to the Destroyed Nesting Area, and Related

While I was at the Destroyed Nesting Area this morning, I was pleased to see rabbits scurrying about.

The Charles River White Geese are the most visible victims of the attacks on the Charles River by the state’s Department of Conservation and Recreation and by Cambridge.  Other free animals have been severely harmed by the repeated destructiveness of the two.

On May 22, 2017, in a strikingly deceptive document, the Cambridge City Council encouraged the Massachusetts Secretary of Transportation to destroy significant parts of this last remaining habitat of the Charles River White Geese for a small vehicle highway, with tree destruction.

I will follow up with details in the next few days.

I have received the following good news on the Charles River from Phil Barber:

Thanks again for all your good work, by the way, at Magazine Beach and elsewhere. I went over to the area we discussed yesterday and observed a catbird and a redwing blackbird in the trees. There are many rabbits this year. The wild areas are growing fine new cottonwoods and sugar maples and a few mulberries.

I believe the bird observation is at the Magazine Beach hill, where the Cambridge City Council, on April 24, sought funds toward the destruction of 30 trees, part of the 54 trees they want to destroy in the Magazine Beach reservation.

Here is a photo of the current entrance to the Destroyed Nesting Area. 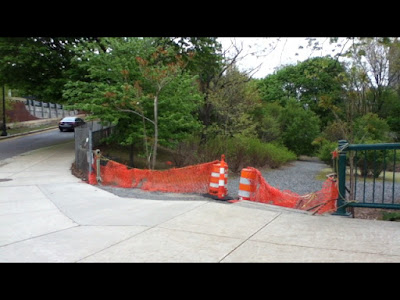 To the left you can see the overpass for Memorial Drive with luscious grass under it.  With the walling off of their food for most of the last 36 years at Magazine Beach and at the Hyatt Regency Hotel, this tiny area was the last remaining food readily available to them.

The Charles River White Geese are highly responsible jaywalkers.  They used to stand at the edge of the on ramp waiting for cars to stop coming and then cross.

Being geese, however, there were stragglers.  Since they were so careful at the beginning of crossing, they were across or in the road when cars returned.  The drivers would wait for them to cross with very big smiles on their faces.

The blockade of the entrance makes the fight to starve them by the DCR and Cambridge even clearer.
Posted by Friends of the White Geese at 8:24 AM