For clearer presentation on this blog, I have inserted proper blog format, including a section for the added photo.

During this extended outrage on the Charles River, Phil Barber has repeatedly compared trees on the Charles to a group of trees in northern Cambridgeport which were in excellent condition.

The trees are in an area in which the Cambridge Development Department has done extensive “planning,” the former NECCO Spur off the Grand Junction.

Here is a cropped MIT [ed: Massachusetts Institute of Technology\ photo, arrow added, from its report concerning the alleged Grand Junction bike path (stalking horse for private I90 off ramp for MIT?).  To indicate the  location of the photos on the former NECCO spur I have added a red arrow. As stated below by Phil, the property in whose bounds the arrow and the tree destruction are located is on Sidney Street.  The rear end is on the former NECCO spur. The property, belongs to MIT.. 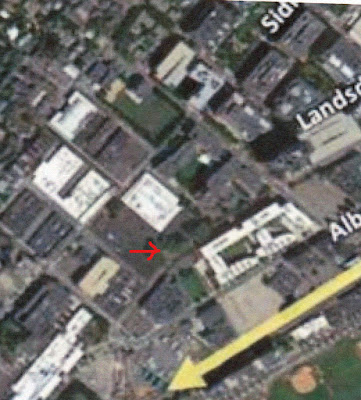 The yellow arrow is provided by MIT on the Grand Junction in MIT’s original presentation.

MIT was one of the most visible fighters for the destruction of hundreds of excellent trees on the Charles River by Cambridge / Department of Conservation and Recreation in January 2016.

Here is a blow up of Phil’s photo of the excellent destroyed trees, photo taken in April 2017. 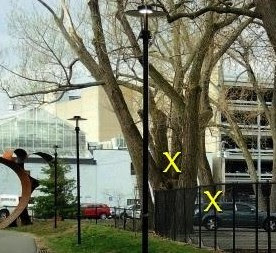 Phil recently went back there. Those excellent trees have been destroyed. He noted the destruction with X’s, as seen to the left [ed: above].

And here are Phil’s before and after pictures from which the above was taken, marked with dates taken. 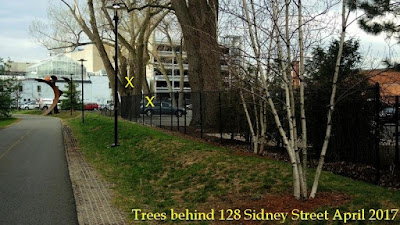 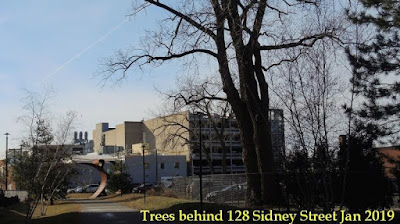 . . . .all but four of the huge old cottonwoods along the former railbed have been cut down recently. they looked healthy enough last summer.

I would say six or seven large trunks were removed. They looked healthy enough, as i recall, a few dead branches like those on the river maybe.

Phil Barber has found an additional before photo of the outrage by the Massachusetts Institute of Technology on the former NECCO Spur.  Here it is, for your information. 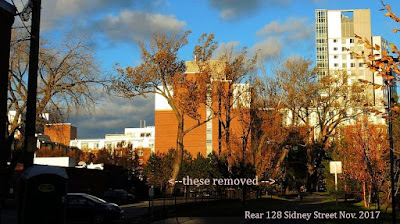 And, as I said, this area has been an area of major concern for the Cambridge Development Department.

Locations nearby which are also of major concern to the Cambridge Development Department include:

1. That portion of Memorial Drive between the BU Bridge and the Longfellow Bridge where the DCR and Cambridge destroyed hundreds of trees in January 2016. “Phase 1.”

4. Destruction in the Goose Meadow has been in existing Grand Junction plans, and would clearly be associated with the outrage in the Wild Area.