Bar Michael Vick, How about Cambridge and the DCR?

The following is a copy of an exchange and several other postings on the facebook page.

I think Friend would prefer to be anonymous. I would be pleased to identify him/her should he/she change his/her mind. I am positive there were more comments but I cannot find them. If anybody wants to pass on the other comments, they are welcome.

1. Friend: Michael Vick purchases Parrot - should not be allowed to do so. 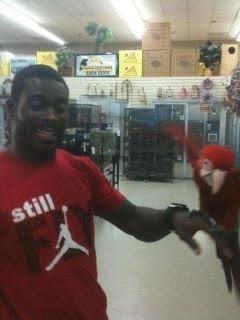 This is worth posting more than once. Todd Marcuse of Birds Exotics just sold a Caique Parrot to Michael Vick!!!!! Please forward to everybody you know. He has already taken the picture down from his FB site.

See Michael Vick in Birds Exotics who ended up purchasing a Caique Parrot from Todd Marcus. He must have been really desperate to sell to MV as he is going to lose a lot of business over this one.

I see good reason why a lot of people have very major problems with Vick.

I do distinguish between Vick and Cambridge and the DCR, however. Vick has gone to jail and served time. Vick seems to be trying to claim that he has reformed.

Cambridge and the DCR do nothing of the sort. They have a long standing pattern of heartless animal abuse and massive environmental destruction combined with flat out holier than thou lies of environment sainthood.

The situation with regard to Vick is comparable to the Monteiro case, another situation which involves flat out lying of sainthood by Cambridge that they are saints on civil rights issues. In Monteiro, the Cambridge City Manager has been found civilly guilty of destroying a woman's life in retaliation for her filing a civil rights complaint. The jury said $3.5 million damages. The judge said "reprehensible." The appeals court panel said "ample evidence [of] outrageous actions."

Translation: The courts say that the Cambridge City Manager should be fired without his golden parachute and possibly without his pension. But a bad city council keeps him in office and gives no indication of firing him.

So Vick has served his time and looks like he is trying to reform. The Cambridge City Manager and City Council, on the contrary, are in the process of massive animal killings and have been deliberately starving the beautiful valuable Charles River White Geese for seven years.

I sympathize with the concerns for Michael Vick, but, in my very strong opinion, the key actors on the Charles and at Alewife are far beneath him.

Vick can not reform as he wasn't punished properly. He was glorified by HSUS and they downplayed all that he did wrong. He is a murderer he has killed many dogs and is not the least bit sorry for it. Some of his dogs are still at best friends in utah trying to recover from the horrendous acts of MV. Nobody should sympathize with this cold blooded murderer. And now this idiot sold him a bird? What will he do when the bird bites him? Throw him up against the wall and break his neck?

Anybody that deliberately kills animals whether it be by poisons, taking away their environment or fighting they all should be punished accordingly.

Correction: The Monteiro jury said $3.5 million PENAL damages. Actual Damages were about $1.1 million. $8.3 million has been paid with likely cost to Cambridge in excess of $10 million.

And the animal pogrom at Alewife is still on track.

And the heartless animal abuse on the Charles with much more scheduled is still on track.

And their nonstop lies of sainthood on environmental issues has not missed a beat.
Posted by Friends of the White Geese at 2:57 PM

“Our attempt in 2005 to acquire general information about city employee complaints of discrimination, to receive a copy of the Monteiro complaint and to request the city law department to meet with us simply to provide us with the information, which the ordinance clearly mandates that we should have, was met with hostility. We were accused by the law department with interfering, told that our inquiry was out of line and informed that as a city-appointed body our interest and concern should be with city officials, when our mandate is to be concerned with ant ‘protect . . . the human rights of all city . . . employees.’ Further our attempt to be ‘properly informed,’ we were told, carried the threat of a conflict of interest.”

We learned of this letter from the Cambridge Chronicle which published it on pages 10 and 11 of the October 20, 2011 edition. It appeared as the second letter of the issue. Almost all of the letter was printed in letters to the right of the editorial. The first letter was a letter from a city council candidate calling for disclosure of closed session information concerning the Monteiro Case.

The Chronicle’s complete publication of the letter is on line at: http://www.wickedlocal.com/cambridge/news/opinions/x984138967/Letter-No-information-on-Monteiro-case-from-the-start#axzz1bb63kGDe.

According to the Chronicle, the letter was sent by the former commissioners “last week”.

I searched the records of last Monday’s meeting and did not find the letter. The next prior meeting, two weeks earlier, did not include it either.

If I had been able to find the letter, I would have published it in total. This partial publication is made out of respect for the Cambridge Chronicle.

The response attributed to the Cambridge City Solicitor is very much consistent with the mentality of various fake "protective" groups in Cambridge. The supposedly independent groups are clearly more free than appointed entities. Nevertheless, this mentality is the rather obvious reason why many groups are fake.

Writing this letter took a lot of guts.

The superior court decision on Monteiro may be read at: http://charlesriverwhitegeeseblog.blogspot.com/2009/04/judge-issues-decision-denying.html.

The appeals court comments on Monteiro may be read at: http://charlesriverwhitegeeseblog.blogspot.com/2011/08/appeals-court-decision-in-monteiro.html.

A partial summary of Department of Conservation and Recreation outrages may be read at: http://charlesriverwhitegeeseblog.blogspot.com/2011/10/charles-river-connectivity-bizarre.html.

It all has the same stench.

“It is imperative to democracy that there is governmental oversight, especially in Cambridge where we have a strong city manager who’s been in office too long and an anemic City Council that seems to be ineffective in reining him in.”

This paragraph is the fifth paragraph the Cambridge Chronicle’s editorial on page 10 of the edition of October 20, 2011, published on line at. http://www.wickedlocal.com/cambridge/news/opinions/x268459622/Editorial-Coakley-should-take-city-of-Cambridge-s-stonewalling-seriously#axzz1bb63kGDe.

The editorial is a plea to the Massachusetts Attorney General to provide disclosure of the minutes of executive sessions of the Cambridge City Council concerning the handling of the Monteiro cast. The judge’s “reprehensible” comment is featured prominently. The editorial seeks the Attorney General’s action to force disclosure “before Election day [of] details that may change the way voters think of certain sitting councilors.”

The editorial’s description of the Cambridge City Council is too kind.

The jury, judge and appeals court have found that the Cambridge City Manager destroyed the life of Malvina Monteiro in retaliation for her filing a civil rights complaint.

The superior court decision may be read at: http://charlesriverwhitegeeseblog.blogspot.com/2009/04/judge-issues-decision-denying.html.

The appeals court comments may be read at: http://charlesriverwhitegeeseblog.blogspot.com/2011/08/appeals-court-decision-in-monteiro.html.

A partial summary of DCR outrages may be read at: http://charlesriverwhitegeeseblog.blogspot.com/2011/10/charles-river-connectivity-bizarre.html.

NOTE: This is the 700th entry in this blog dating back to November 19, 2005. Before that, commencing on March 6, 2000, we published more than 600 editions of our on line newsletter. The newsletter reached a distribution of over 1300. The computer file of the newsletter contains 646 entries.
Posted by Friends of the White Geese at 5:17 AM