Saturday morning, I posted my report on the Friday visibility.

I was so happy. I thought I had seen trees planted.

Saturday afternoon, I walked the ground in the nesting area and realized I had made the mistake that decent people so commonly do, a mistake that allows a really rotten situation to continue in Cambridge and on the Charles River.

I assumed I was dealing with basic decency.

I am transmitting four photos from the photos I took on March 29. One is an overview, two are of the BU Bridge side, and one is of the ramp side.

The first photo is the overview, shot from a location which has not been destroyed by the very destructive agency responsible for the continuing and accelerating outrage. 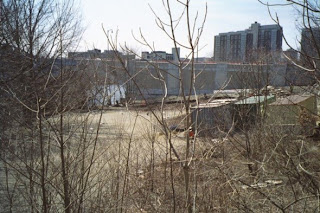 In the second photo, the sticks in the middle of the photo are what I, on Friday, thought were tree plantings. In the third photo, they are to the far right. 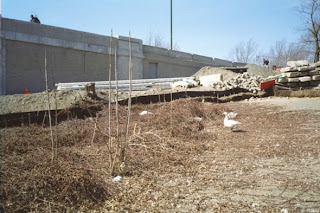 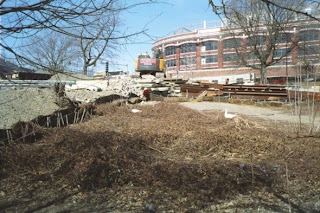 The poor geese are doing what they can to survive in the face of this outrage.

In each photo, there is a clear difference between crushed vegetation and strands of, apparently, vines stretching toward the middle of this man made wasteland. Those vines are nature healing itself. If nature were simply allowed to heal itself in the middle, the meadow would be reborn.

In the background is the construction. The construction zone to the left is now totally unnecessary. The excuse for construction was work on the BU Bridge. The work is done. The massive intrusion should be removed. 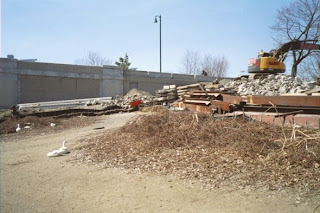 The fourth photo is of the vegetation toward the ramp with the first area visible to the left. Somewhere in the middle of this vegetation are the two small trees which I saw with leaves, struggling, nature reborn.

I still have a number of photos I have not published from the March 29 shoot. I will publish them in coming days.
Posted by Friends of the White Geese at 9:05 AM