I have gone over the package the Cambridge City Council is talking about when it brags of a “bike path” on the Grand Junction railroad.

Here are two plans bragging of their destructiveness.

It is highly likely that at least the first outrage is included in the $24 million blessed by the State House in 2014.  The second one is the one that friends of the DCR, etc. are trying to ram through the MassDOT group working on the Mass. Pike rearrangement, along with the first, at least as far as the Wild Area is concerned. 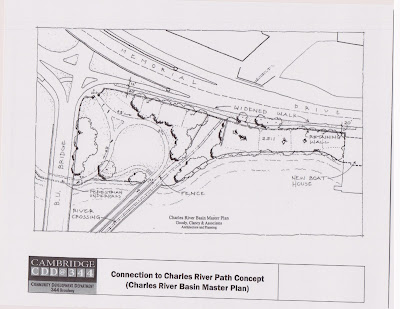 Note the word “retaining wall” pointing at the on ramp to Memorial Drive.  That retaining wall would remove all the dirt in the wild area and turn it into environmentally useless flat land, without all those trees.  This is exactly what the DCR is bragging about when it shows exactly one undestroyed tree in their tree destruction plans.

Note “pedestrian underpass” under the BU Bridge.  This is the sort of destructive stuff that MassDOT fought against under the next three bridges.  It looks like this “pedestrian underpass” would be built in the Charles River next to the Destroyed Nesting Area and next to the planned to be destroyed Wild Area.  This would wipe out the last refuge from the elements for the Charles River White Geese.

Note the fence placed next to the hill which would block access between the Destroyed Nesting Area and the Wild Area. 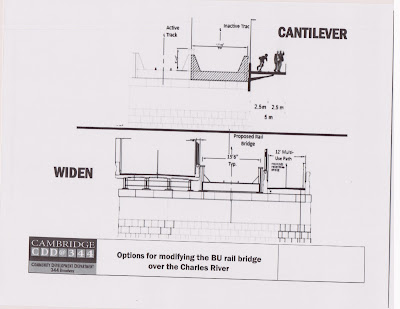 It is no coincidence that the exact proposal in this map for widening the Grand Junction Railroad Bridge was used in the local public transportation agency (MBTA) plan to create an off ramp from the Mass. Pike to Cambridge.  The euphemism this week is bike path, but a lot of destruction being done in the Memorial Drive area is slated for that off ramp.

Harvard bought their future Medical School location only months after the MBTA issued this plan.

And here is what the Wild Area looks like before all those bad city councilors and their friends go to work.  They would never stoop so low?  Have you looked at the Cambridge Common recently? 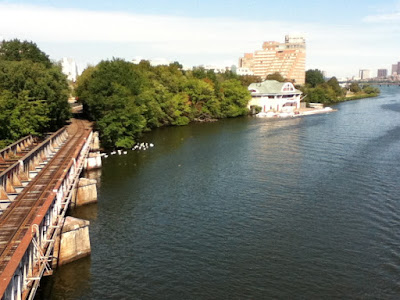 Posted by Friends of the White Geese at 11:46 AM