This odd sign was on the fence by the goose meadow pointing toward the entrance. Several kids trooped in and wandered around a bit and left. Fine print says it's from "American Foundation for Suicide Prevention".

Beneath it is the earliest pic I have of the meadow, December 82, with a friend's dog. 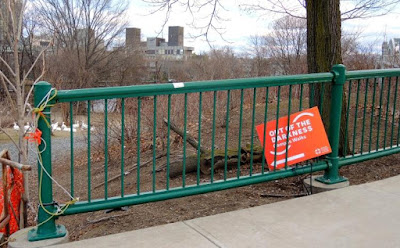 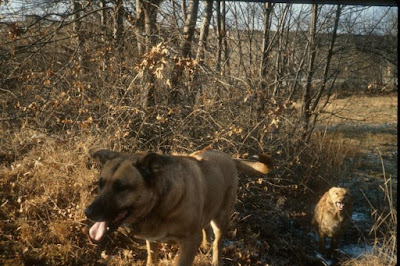 Phil’s first photo is from the Entrance to the Goose Meadow which was illegally created by Boston University at the northwest corner or the Destroyed Nesting Area of the Charles River White Geese.

Way down can be seen some of the Charles River White Geese.  Going further in that direction you come to the eastern edge of the Destroyed Nesting Area, the Grand Junction railroad.  If you look really close, you can see the railroad tracks on the rise (unless I am seeing more than I reasonable can).

You can see the right hand (eastern edge) of the opening Boston University illegally created in November 1999.  To the right of the photo, not in sight, is the northern end of the BU Bridge over the Charles River.  The orange stringy stuff is another piece of heartless animal abuse from the Massachusetts Department of Conservation and Recreation.

We are dealing with truly vile people.

The DCR and Cambridge are determine to implement a goal of the DCR its “Charles River Master Plan” which are ignored as convenient for animal abuse.  The goal is to kill off or drive away all resident animals from this part of the Charles River.

Allowing resident animals to have real food is unacceptible to these vile entities.

The Charles River White Geese are extremely careful jaywalkers.  They stand on the sidewalk just to the left of the entrance and wait to cross until there are no cars coming.  Unfortunately, they are geese and some do dawdle.  It is always a pleasure to see those nasty commuters with big smiles on their faces admiring these beautiful animals.  I have never heard a horn beep to rush them, although, if I am around, I will nicely shush the dawdlers in the proper direction.

The dog in the foreground is the nekghbor’s dog, and the dog behind him, I presume, is the same Golden Retriever from Phil’s photo in 1989, which I passed on yesterday or the day before.

I have spent the last two days at an alumni reunion of mine at UMass Amherst.

I mixed business with pleasure.  I have worked as a background performer on the first season Castle Rock series soon to stream on Hulu.  I worked in Orange and Athold which are traditional communities just north of Route 2, the northern of two east - west highways in western Massachusetts.

Getting to these places is a major drive.  I would be much happier working two days at a time and staying over.  So I tried a local motel in Orange just south of Route 2.

To my great surprise, the motel did not seem to have WiFi.  So I did my last report yesterday morning from a rather new Starbucks in Athol which is east of Athol center which is in turn east of Orange.

I arrive at my first alumni event on Saturday because I got so hung up on the last report from Athol.

So I was late for an alumni event at UMass Amherst perhaps 90 miles west of our favorite part of the Charles River because is was working in the western Starbucks facility in Athol, also very far distant from the Charles River.

I have in the past few days, reported on the apparent attacks of Cambridge and the DCR on the environment at Magazine Beach.  A major part of the outrages are directly harmful to the Charles River White Geese.  Physically, the biggest part of the outrages are the destruction of another 56 major trees on the Magazine Beach Recreation Area including the playing fields.

This destructiveness destroys the view from the playing fields as part of the massive tree destruction.

I confused one reader.  Part of the destruction is gentrification.  Cambridge and the DCR are destroying an environmentally responsible parking lot used by little guys for many years to have picnics on the hill west of the playing fields.

Thank you very much for you astute comments.

The outrage is so massive that it really is impossible to BRIEFLY convey it.

Regrettably, we are talking a fairly large area, and the destruction varies skillfully from one part of the area to another, and varies with the outrages which are inflicted, accordingly.

I have just posted a report on the most sensitive area, the Destroyed Nesting Area of the Charles River White Geese. This formerly was their home in bad weather and during nesting. It now is the only part of their formerly mile long habitat which is allowed to them, and it has been viciously destroyed.

In the last few days, I have delivered an analysis of PART of the destruction in the Magazine Beach Playing Fields where, for most of the last 37 years, the Charles River White Geese had as their principal home and food. It is a long analysis with a lot of photos, including photos of the area which is the subject of this report.

This report concerns an area which has never been used by the Charles River White Geese, too high, too steep a hillside to access. This area is the subject of planned environmental outrages which are discussed, with photos, at least in part, in that analysis, along with the Playing Fields as well.

This report is coming, but it involves considerable work to change formats.

In addition to heartless animal abuse and environmental destruction (and attack on women's rights (Cambridge only)), another outrage from the Cambridge City Council and the Department of Conservation and Recreation is heartless gentrification in this location which is on a very visible hill east of the Playing Fields which have been their home most of the last 37 years.

These plans involved massive destruction of mostly excellent trees and destruction of the environmentally sensitive parking lot used by non upper class folks who traditionally use this area for barbeques.

Attached is a photo from the I90 rebuild project across the Charles. The Destroyed Nesting Area is off this photo to the right / east. The Magazine Beach playing fields fill the photo.

The doomed / excellent park is to the left.

I do not exactly know the distances involved. My guess is that it runs about half a mile.

Thank you very much for your concern and interest.

If you get a chance, please friend the Charles River White Geese on Facebook if you have not done so already. 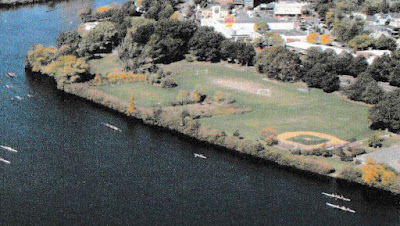 Phil’s photos in section 1 were taken at either edge of the Goose Meadow, which is to the right / east of the Magazine Beach Playing Fields in the above picture.  First comes a sewerage treatment plan from the Massachusetts Water Resources Authority, then the BU Bridge, then the Goose Meadow / Destroyed Nesting Area.

The Goose Meadow is bounded by the BU Bridge, the on ramp to Memorial Drive, the Grand Junction Railroad, and the Charles River.

Here is a map of the area I prepared in response to and based on the DCR destruction plans which, in turn, were based on City Manager Healy’s plan that was first announced in 1997 by the predecessor to the fake protective group which calls itself the Charles River “Conservancy.”. 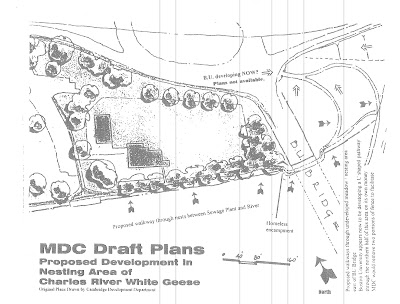 The middle area is the MWRA plant.  It is beautifully designed, with a meadow and trees on top of it.  On the right is the BU Bridge and the Destroyed Nesting Area.  To the left is the playing fields.  The arrows below the MWRA plant show a highway in the Charles River intended to connect the playing fields to the Destroyed Nesting Area to combine the two locations for the benefit of BU.

It is no coincidence that there is only one opening in the Starvation Wall.  That opening is the western end of this proposed highway to connect the two locations for the benefit of Boston University.

And here is a panorama of the Destroyed Nesting Area taken from the BU Bridge.

ALL the destruction was created by the DCR or based on DCR plans.

West of the area in the I90 photo is the ADMITTEDLY excellent seven  tree grove across from the MicroCenter parking lot which the DCR and the Cambridge City Council (order 1, April 24, 2017) want to destroy.  That vote came promptly after the love fest on the stairs of Cambridge City Hall with members of the City Council praising themselves for their SUPPOSED environmental sainthood. 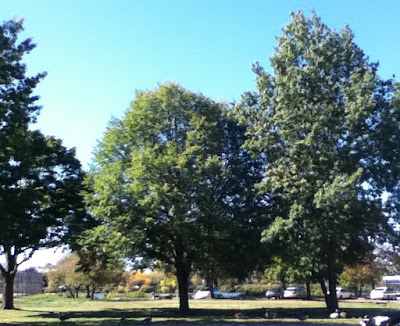 As I have said, at least one City Council incumbent, and perhaps two, has failed of reelection based on heartless human abuse in which a Black, Cape Verdian, Female city department head had her life destroyed in retaliation for her working for women’s rights among employees of the City of Cambridge.

Posted by Friends of the White Geese at 12:44 PM