Some more photos of an environment the Boston Globe says does not exist.

As promised in my response to the Boston Globe’s not knowing what it was talking about or not wanting to know what it is talking about, I will provide a few photos now from my March 29, 2011, shoot and follow up with more later.

The problem is the norm in the ongoing destruction of the Charles River, of Alewife, of Fresh Pond and of too much else. The real problem is a massive machine which controls liberal politics in Cambridge plus, at least on environmental matters, beyond Cambridge. It is silly to consider the fake groups which dominate the scene in Cambridge, MA, anything other than corruption. It could be one or two people lying. It could be a person not even visible in the group, lying and fooling key people.

People who should know, such as the Boston Globe, saying this does not exist is a very major part of the problem. 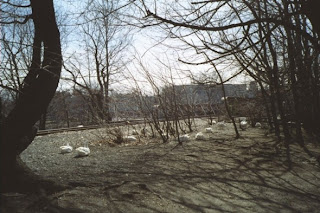 In the photo of the adults with the babies crossing the track, I commented that the area on the nesting area side of the track was lush vegetation until the Charles River Conservancy started destroying vegetation for the state bureaucrats who, in turn, are coordinating closely with Cambridge. This is a shot from below to the right of where I was standing when I took that shot. This photo is of the water end of the swath which has been destroyed for work on the BU Bridge, work which has been completed. Once again, formerly lush ground vegetation. The swath which was destroyed has not been returned. The arch is of the BU Bridge. The far side, looking through the arch, is Boston. There is a very major difference in Boston. There has been major destruction of ground vegetation on the Boston side. The Charles River Conservancy admits it and has been apologized. The difference is that Boston has a government worthy of respect. Cambridge has a government with a lot of fake groups running around telling people to look at everything else. 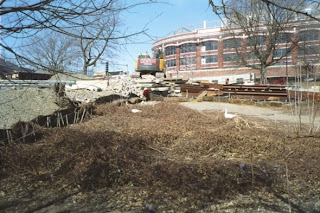 This area is of vegetation which was not destroyed by the state before the BU Bridge work and was not destroyed in the BU Bridge construction. The area which needed to be destroyed for access is to the left. It continues to be destroyed. Straight ahead is the silly destruction area, inexcusable from the beginning. Still destroyed. The geese are trying to live here. This vegetation was normal until and continues to be normal on the hillside. It is a tiny area in a large swath of destruction. It has since turned green. 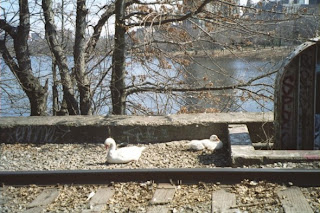 The state is trying to kill them piece by piece. The state, in its publicly announced plans, translating the secret definitions, says it wants to kill them. And Cambridge with its fake groups runs around calling itself holier than thou is a very major public relations campaign in support.

And the Boston Globe says they do not exist.
Posted by Friends of the White Geese at 9:54 AM