First and foremost, destruction is going on on the Charles River because the key entities, the Department of Conservation and Recreation and the City of Cambridge, MA, are simply unfit to have anything to do with management of the environment. The key people well deserve to be fired for their incompetence.

Tactics used by the DCR rely more on flat out lies than do the tactics of the City of Cambridge. Cambridge relies more on skillful lies, but Cambridge has been known to use flat out lies and the DCR uses all sorts of lies, skillful included.

A very major part of the corrupt situation in Cambridge is organizations connected to the City running around using fraudulent tactics to keep the population under control, achieve whatever destruction they can fool people into helping them with, and lying that the city government is politically correct.

The DCR’s policy toward resident animals is to kill them off unless the move “voluntarily.” This is stated in their secret definition of Parklands - no resident animals need apply. They want parklands everywhere on the Charles River Basin. Tiny urban wilds WILL be destroyed.

And I have proven all of this repeatedly.

That caveat having been made the below aerial photo says a lot about what is going on. My notes indicate that it is from 2006. I assume it is from an environmental impact statement, probably on the Urban Ring subway line converted into buses. I assume I added the labels. 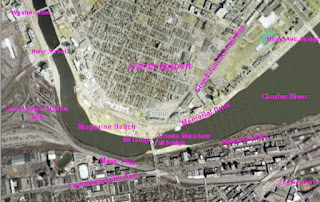 In the below middle of the photo are Magazine Beach and the Goose Meadow. Between them is the BU Bridge with the Grand Junction Rail Bridge running under the BU Bridge. The Massachusetts Turnpike (I-90) passes under the BU Bridge and Commonwealth Avenue at the bottom of the photo. The area to the left marked “Cambridge-Allston tolls very visibly also includes the Boynton Railroad Yard. On the upper right is the Grand Junction Railroad Track. Memorial Drive is for the most part, the southern extreme of Cambridge, which is on the top.

A few yard trains a day run between the Boynton Yards and other yards associated with North Station in Boston. The trains run over the rail bridge and up the Grand Junction.

Harvard purchased the Cambridge-Allston tolls / Boynton Yards not long after a state bus study demonstrated that it was possible to run an off ramp from that area of the Mass. Pike near the yards over the rail bridge and to Cambridge. Harvard’s maneuvers since then make it clear that Harvard intends to move the Harvard Medical School to this location.

The River Street Bridge at the top left becomes Cambridge Street in Boston. Much more now empty lands are owned by Harvard above Cambridge Street. The empire expansion by Harvard in this area was stopped in 2009 because of the Great Recession. Harvard has announced resumption of construction in 2014.

Careful observation of Memorial Drive to the right of the Goose Meadow shows a point where Memorial Drive widens into the Charles River. This point is about 40% of the way over. This is the location of the excellent 104 tree grove which the fake groups fraudulently flaunt, bragging about their excellence and lying through omission by not mentioning that they intend to decimate it.

The area targeted for massive tree destruction starts at Magazine Beach extends up Memorial Drive, passes the Massachusetts Avenue Bridge (marked, upper right) and extends to the Longfellow Bridge, the next bridge after the Mass. Ave. Bridge. These are the trees that the DCR lied were universally diseased when they tried to get Obama money for the purpose, but which they accurately described in their filing with Cambridge as exactly the opposite.

Magazine Beach is to the left of the BU Bridge. It has seen two phases of attacks, with a third ongoing.

In the first phase, the DCR and Cambridge walled off the Charles River from Magazine Beach in direct violation of the DCR’s supposed policies which were then changed after the fact. The only portion of Magazine Beach which was not walled off was a tiny boat dock. The boat dock was kept but made useless by the creation of a bridge to get to it. Another of the DCR’s supposed policies is that they want nothing but water related uses on the Charles River.

The Charles River White Geese had the nerve to continue limited feeding at Magazine Beach after their principal food was walled off to them. They entered through the boat dock.

So the DCR and Cambridge, in Phase II created an massive wall to keep the Charles River White Geese from entering through the vestigial boat dock.

In the middle future, the Goose Meadow has shown on city maps as the BU Triangle. Part of the small vehicle highway the CRC and other fake groups are fighting for would be built under the BU Bridge connecting the Goose Meadow to Magazine Beach probably through that opening which was left for the now destroyed boat dock.

Harvard shows the Cambridge Common as part of Harvard’s open space. These machinations make this portion of the Charles River part of the BU Campus. BU owns the boathouse a block to the right of the Goose Meadow.