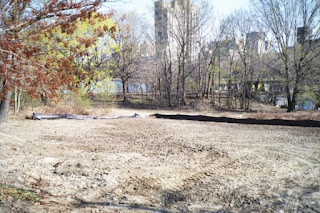 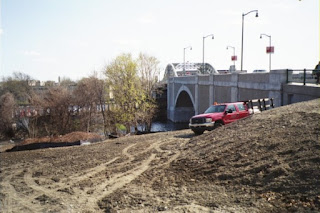 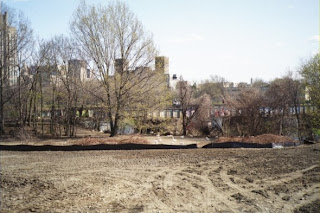 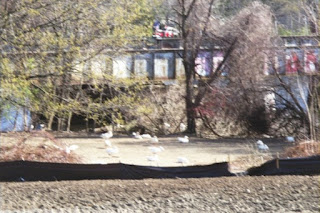 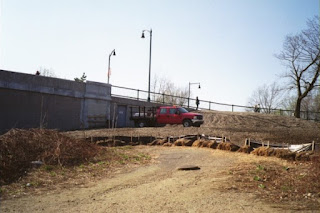 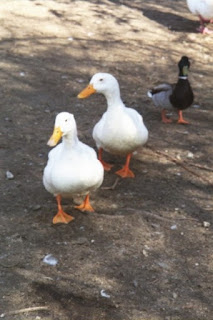 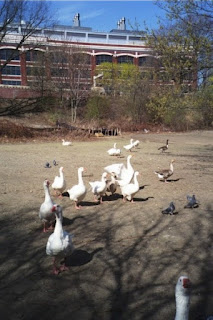 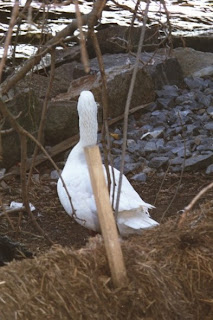 1. Introduction.
2. Brief response.
3. A world strikingly different from reality based in part on bizarre use of words.
4. Summary.

The fake Cambridgeport “Neighborhood Association” has been running around loving Magazine Beach for awhile now.

That is a very bad sign if you love the Charles River and its animals.

In the last week, one thing they are really fighting for became clear when the outrage at the Destroyed Nesting Area got much worse. The standard tactic of Cambridge Machine entities is to distract attention from outrages by their friends.

For a couple of years now, the state has fully destroyed about two thirds of the Destroyed Nesting Area of the Charles River White Geese as part of the BU Bridge project.

Now the state has dumped massive numbers of designer bushes in pots in that location, making it clear that their “amelioration” for the harm done by the BU Bridge is intended to make the destruction of the area for animal use permanent.

This is complemented by creation of large impervious paths through the coming impenetrable thicket.

This is continuation of their implementation of the Department of Conservation and Recreation's policy to kill off all animals on the Charles River while using whatever excuse is readily available.

So the fake neighborhood association is running around loving Magazine Beach and distracting attention.

He approached me in a hostile manner and objected to my reports that the fake neighborhood association was created in coordination with the Cambridge City Manager.

Standard technique: they are doing something really rotten, so distract attention.

I responded that his comments were in striking contrast to very clear past statements.

Now, first of all, if I spend a lot of time on this, I am suckering for their tactics.

Secondly, a full response would need many, many elaborations and digressions, making the response unreadable.

Thirdly, I am not a psychoanalyst, but I can only try to figure out truly outrageous behavior and offer explanations.

Fourthly, the situation with regard to the Cambridge Pols is always such that it is impossible to tell between the knaves and the victims. It is entirely possible that everybody you see is a victim with the person pulling the strings not visible. Trouble with this group is that the implementing behavior is repeatedly very rotten. It is very hard to get that rotten and just be a victim

Fifthly, as is true when talking with pretty much all the Cambridge Pols, “you simply cannot be that stupid.”

3. A world strikingly different from reality based in part on bizarre use of words.

The greatest hostilities from the Cambridge pols come when they are defending their secret world which is at striking deviation from the world of normal people, although the constant lies are that their world is superior to the rest of the world.

One key in the continuing outrage is word games. The Cambridge Pols use secret definitions and confuse terms all over the place, lying on one hand and, on the other hand, simply trying to destroy decent people through confusion.

One proof of reality is the case of “Monteiro v. City of Cambridge” in which judge, jury and appeals court, with increasing disgust, condemned the Cambridge City Manager for destroying the life of Malvina Monteiro. Department Head Monteiro had the nerve to file a civil rights complaint. So, according to judge, jury and appeals court, the City Manager destroyed her life.

One columnist in the Boston Globe described the extent to which Cambridge carried the fight as far beyond any basic concept of reason.

But, if you have a truly rotten city government sending a message, that fight sends a message.

It is total nonsense to distinguish between actions of the Development Department and the City Manager.

The tactics have too often been downright outrageous.

Reality is that the contact was made by the City Manager’s agents, the Cambridge Development Department, according to the explanation of the people creating this group.

As I said, many digressions would be appropriate to fully respond to this point, digressions analyzing the sickness which is the Cambridge Pol organization.

Notwithstanding who made the original contact to create the fake “neighborhood association,” all the original contact does is strengthen the case. This organization very clearly functions as a tool of the Cambridge City Manager on matters most important to the Cambridge City Manager, and the actions include actions which can only be described as outrageous.

As far as minor digressions go, you gotta give the victims something on occasion, or they wise up. Additionally, nice actions which have nothing to do with the Cambridge City Manager’s direct goals further the goals of the organization by roping people in.

To the extent I can do so without suckering into chasing my tail, which is the favorite activity that the Machine has for decent people, I will elaborate on side issues later.
Posted by Friends of the White Geese at 8:14 AM