When talking about the City of Cambridge or the Massachusetts Department of Conservation and Recreation, or their Cheerleaders, it is always a mistake to think “They cannot get lower.”

I have reported on the outrageous destruction on the Cambridge Common and at Alewife.  The recent outrage on the Charles River between the BU and Longfellow Bridges, with brief comment on Magazine Beach  is summarized in the video at https://www.youtube.com/watch?v=pTplCCEJP7o.

I have reported on plans to make the Charles River worse.

I have reported on the 50 trees destroyed in Kendall Square, and on needless destruction associated with the Longfellow Bridge repairs.

I have refrained from discussing the repeated wasting of entire blocks of street trees by the City of Cambridge simply because this aspect of Cambridge’s vileness really is not relevant to the Charles River, whereas truly major destruction fits in the pattern..

I have refrained until now.

The City of Cambridge has extended its destructiveness to the lap of City Hall, again.  Cambridge, not that long ago destroyed significant, excellent vegetation on the front of City Hall and in its lawn, converting the front of city hall from a beautiful, magnificently adorned building to a relative wasteland.

This time, the destruction is on the side street adjacent to the Central Square Post Office, a magnificent building across from City Hall.

The destruction is on the east side of the Post Office building on Pleasant Street.  They have destroyed every tree but one in the block between Massachusetts Avenue and Green Street.  The first photo is taken with my back to Mass. Ave. and City Hall in sight to my right. 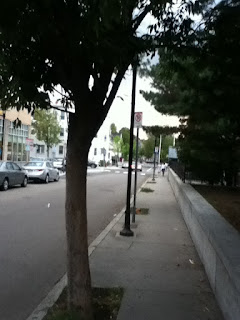 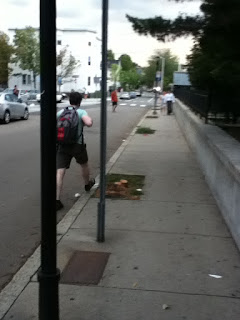 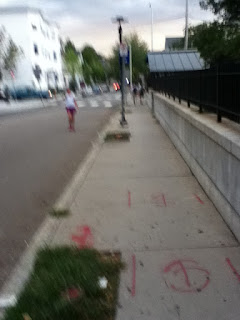 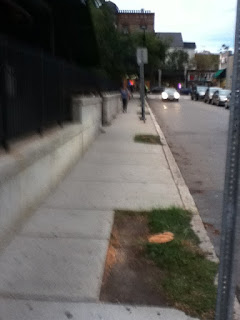 The only tree not destroyed in this block is the one nearest to Massachusetts Avenue.  I can think of two possible explanations for it being saved:

1. They did not get around to destroying it yet.

2. They were perpetuating the lie that the City of Cambridge is environmentally responsible.  Since this tree is the closest to Mass. Ave., it is the one most visible to folks on this main city street.  Refraining from destroying it drastically reduces the impact of Cambridge’s destructiveness that the average person is aware of.

Cambridge has an electorate which wishes to be enlightened.  Cambridge and its cheerleaders go through a lot of bother fooling the electorate as much as is practical.

The destruction must stop.

The vile Department of Conservation and Recreation must be replaced on the Charles with the adult in the room, the Department of Transportation.  MassDOT is not perfect.  Cambridge and the DCR approach being perfect in the wrong direction.
Posted by Friends of the White Geese at 10:12 AM