1. Time Magazine and a reprehensible city government.
2. A responsible state agency, the Massachusetts Department of Transportation (MassDOT).
a. Underpasses.
b. Passenger service on the Grand Junction.
c. A new highway on the Grand Junction railroad bridge.
d. MassDOT behaves responsibly with regard to Cambridge type destruction on Cape Cod.
3. Contrast to the propaganda of the Cambridge City Council and the Cambridge Machine.
a. Environmental.
b. Heartless Animal Abuse.
4. Time Magazine and a reprehensible city government - revisited.

Time Magazine, October 6, 2014, page 34, in its report on General Motors reads as follows:

The 325-page Valukas report confirmed the worst: GM had known about the switch problem since 2001, but because of a culture of silence, obfuscation and buck passing, no one had taken steps to fix the problem.

General Motors’ problem with its cars carries the stench of Cambridge, MA with its environmental destruction, heartless animal abuse, and court condemned contempt for civil rights.

The big difference is that General Motors is taking steps to correct its world.  The Cambridge City Council is working to make its environmental outrages and heartless animal abuse worse, directly and through fellow travelers.

At least the voters of the City of Cambridge have taken action on the Cambridge City government’s contempt for civil rights.

A very major part of Cambridge’s culture of silence, obfuscation and buck passing comes from a system of a  massive organization of fake “protective” groups the Cambridge City Council hides behind.

Given the belligerent lack of action of the government of the City of Cambridge and action in the wrong direction,, Cambridge certainly looks like the General Motors of the past which Time magazine condemns.

The outrages of the past are outrages which the Cambridge City Council certainly looks like it has taken no action to clean up.

On environmental and animal abuse matters, the Cambridge City Council and its fellow travelers are clearly working to make things worse.

And the Massachusetts state legislature and governor have voted $20 million for destruction on hundreds of trees on Memorial Drive / the Charles River, in addition to the outrages at Alewife and on the Cambridge Common

2. A responsible state agency, the Massachusetts Department of Transportation (MassDOT).

By contrast, a major thorn in the side of the Cambridge City Council is MassDOT.

Cambridge and its allies at the Massachusetts Department of Conservation and Recreation want a new highway for small vehicles on the banks of the Charles River.  The latest explanation for the $20 million in tree destruction is that highway.

MassDOT, as near as I understand the situation, has apparently killed part of that destructive highway, a bizarre and very destructive proposal to put underpasses in the Charles River under the next two bridges west of the BU Bridge over the Charles River, the River Street and Western Avenue Bridges.

b. Passenger service on the Grand Junction.

Here is a map of the Grand Junction in Cambridge, MA.  Note at the bottom left, the access under the Massachusetts Turnpike.  This is the area the “activists” are fighting to connect to the Mass. Pike as an off ramp using whatever stalking horse works. 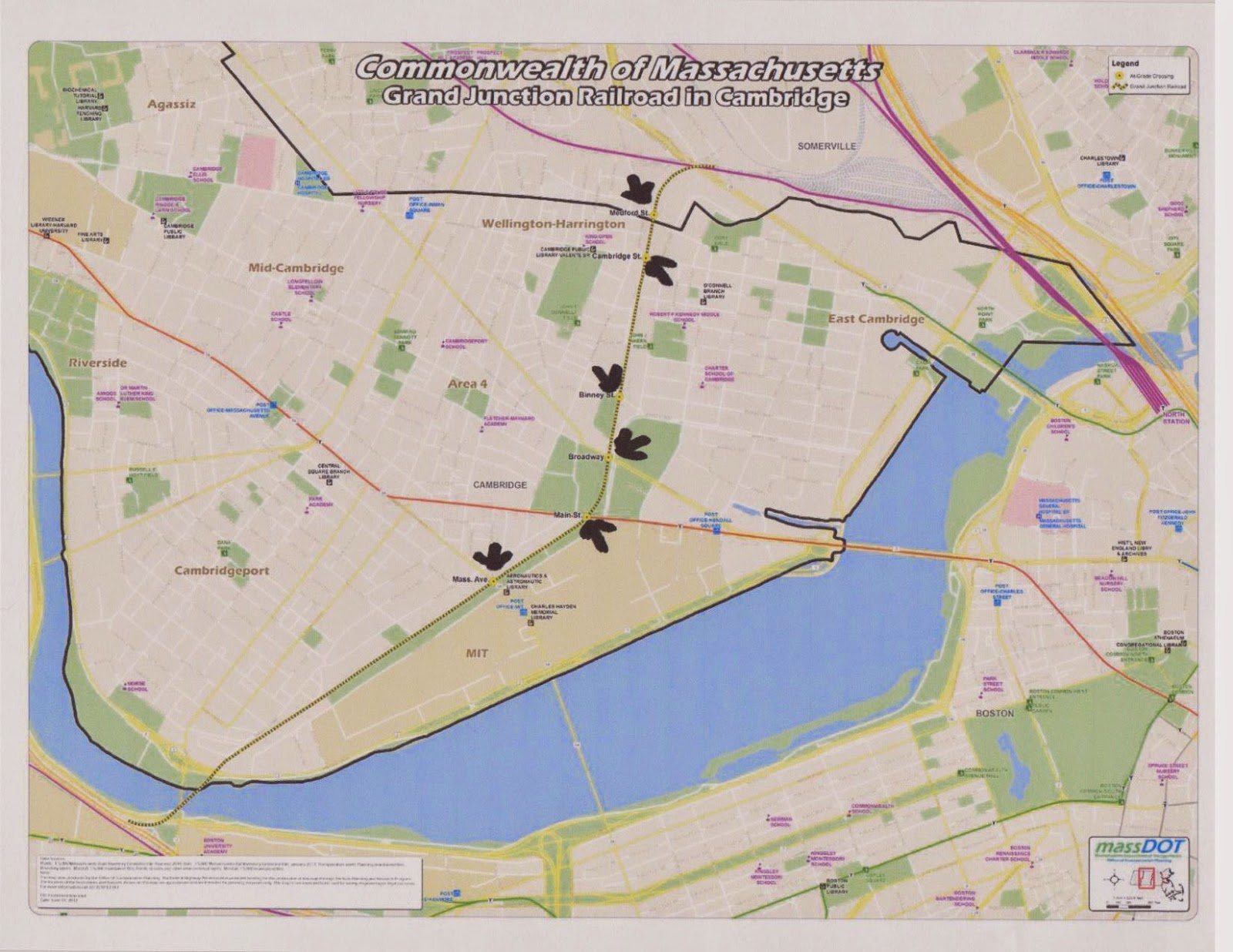 In addition to be highly destructive to the resident animals including the Charles River White Geese, the passenger service would tie up major city streets, going in exactly the opposite direction of placement of railroads in congested areas.  The new service would mess up the extremely busy roads of Massachusetts Avenue, Main Street, Broadway, Binney Street, Cambridge Street and Medford Street / Gore Street.

The fight for passenger service took a cynical method normal in Cambridge.  The pitch translates as: “I am your friend, I am your friend.  You can trust me,  you can’t win, but have I got a deal for you..”

Furthermore, neither the City of Cambridge nor its fake groups control MassDOT.

MassDOT studied the idea and proved it stupid.  Their studies show the Cambridge proposal of no value to anybody except Cambridge’s Kendall Square.

So MassDOT vetoed it, at least for the time being.

c. A new highway on the Grand Junction railroad bridge.

Harvard bought massive railroad yards and the Massachusetts Turnpike exit to Allston, across the Charles River from Magazine Beach, an area larger than Boston’s Back Bay neighborhood. 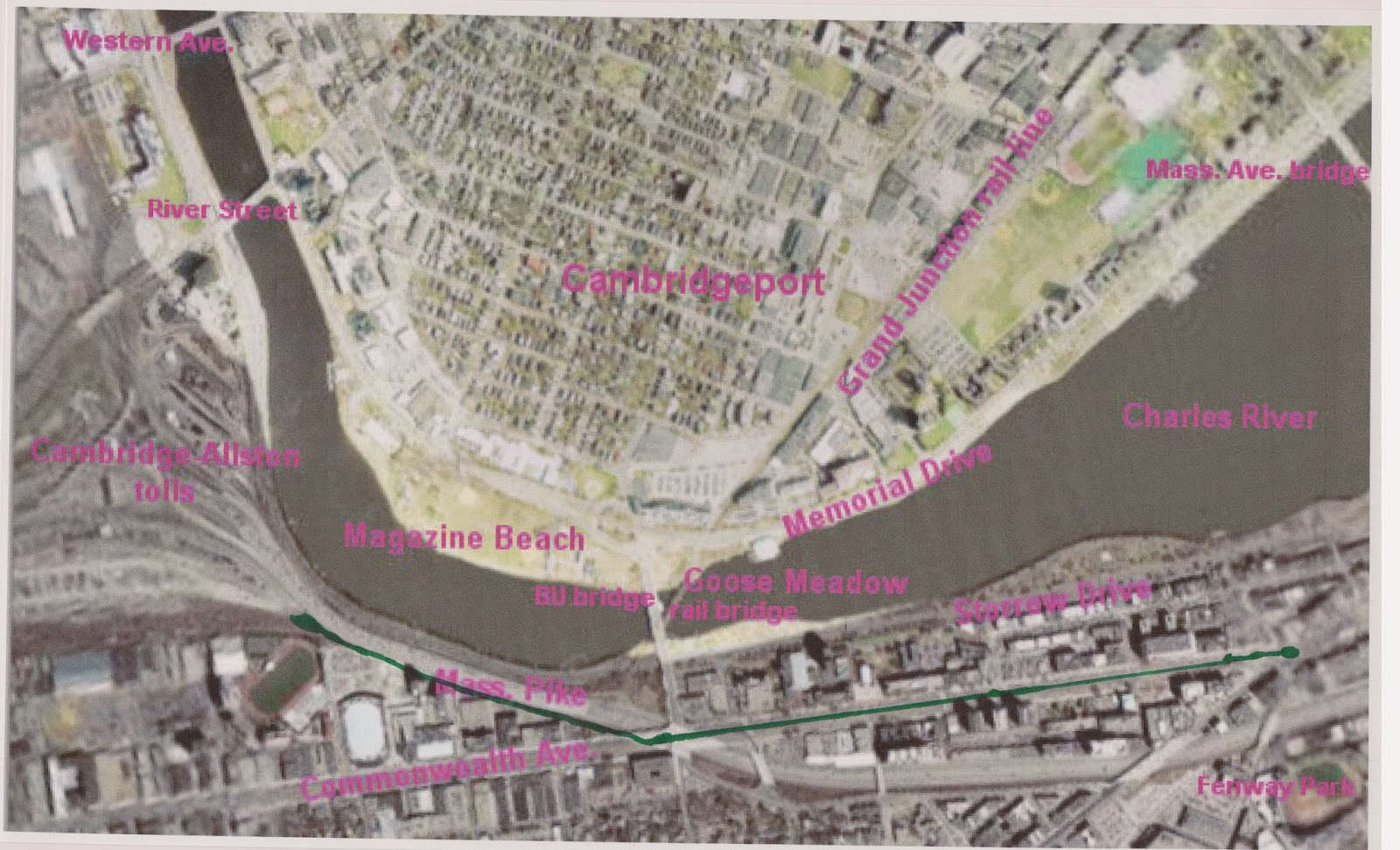 They bought that area a few months after the state transit agency, the Massachusetts Bay Transportation Authority, demonstrated that an off ramp could be built to Cambridge over the Grand Junction railroad bridge under the BU Bridge through the goose and small animal habitat.

The MBTA’s connection was over the area in the lower left corner in the map in the preceding section.

A lot of environment destruction “independently” fought for can be explained as related to this off ramp, including the destruction of those hundreds of trees on Memorial Drive. The tree destruction straightens out Memorial Drive and makes it more fit to accept traffic from Harvard’s off ramp.

MassDOT is rearranging the Massachusetts Turnpike on the Boston side of the Charles River.  “Independent” individuals are fighting for Harvard’s off ramp claiming the latest stalking horse for widening the Grand Junction railroad bridge.

Here is the current appearance of the area where is proposed the stalking horse highway for Harvard’s off ramp to Cambridge.  This is the same area I pointed out on the official map. 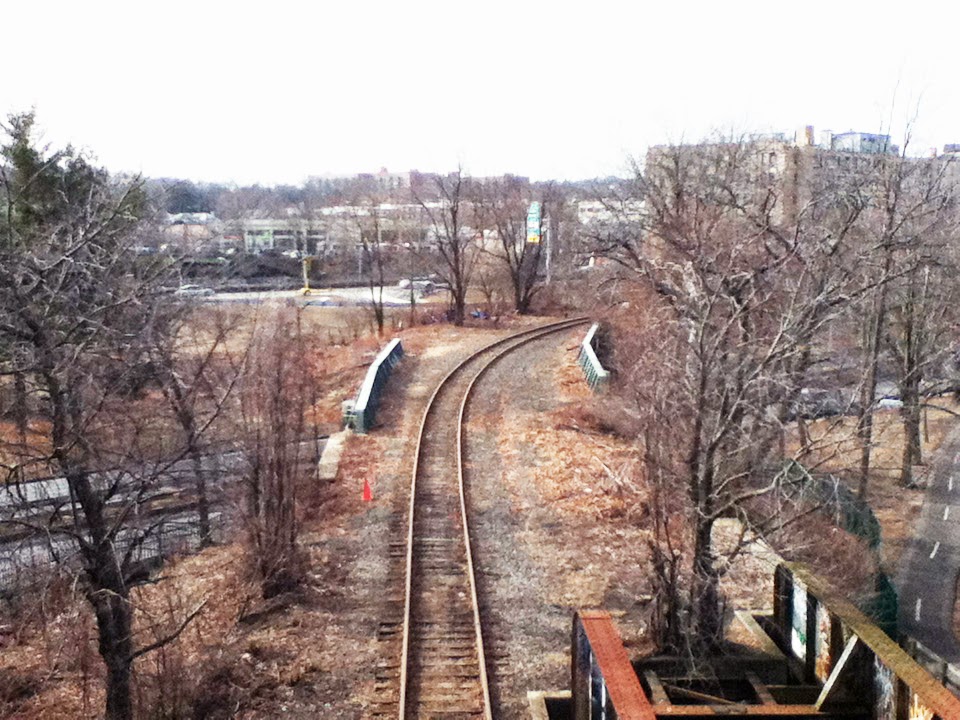 MassDOT has rejected that stalking horse.

MassDOT has refused to include Harvard / Cambridge’s off ramp stalking horse in its plans for the Massachusetts Turnpike rearrangement.

d. MassDOT behaves responsibly with regard to Cambridge type destruction on Cape Cod.

I reported on a major outrage on Cape Cod in my last report, at http://charlesriverwhitegeeseblog.blogspot.com/2014/10/irresponsible-tree-clearing-on-cape-cod.html.

It appears that a contractor way overdestroyed what was intended to be a minor cleanup.

My analysis compares this screw up to Cambridge / its friends deliberate destruction at Alewife, on the Cambridge Common and on the Charles River.

As part of the ongoing lie, the Cambridge City Council yells at private developers proposing to obey Cambridge and Belmont’s zoning in the irreplaceable Alewife woods.

Cambridge has destroyed more than 3.4 acres of the Alewife woods.  Here is a puff piece photograph of Cambridge bragging of the destruction.  The trees on the edge used to fit the entire area of the photo. 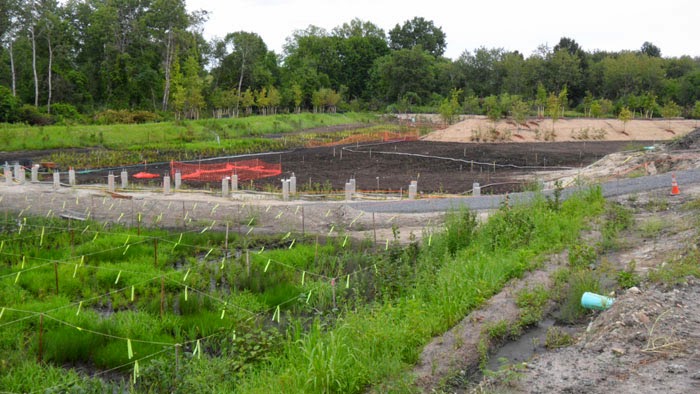 The Cambridge City Council does not mention the fact that the crucial threat to the privately owned parts of the Alewife woods is irresponsible zoning by the governments in question.

But they do love to lie about themselves and call themselves saints by yelling at the other guy.

Cambridge / their state bureaucrats have been deliberately starving the 33 year resident Charles River White Geese by walling them off from their food at the Magazine Beach playing fields by a massive introduced wall of vegetation.

These are before and after pictures.  The after is taken from the Boston Side. 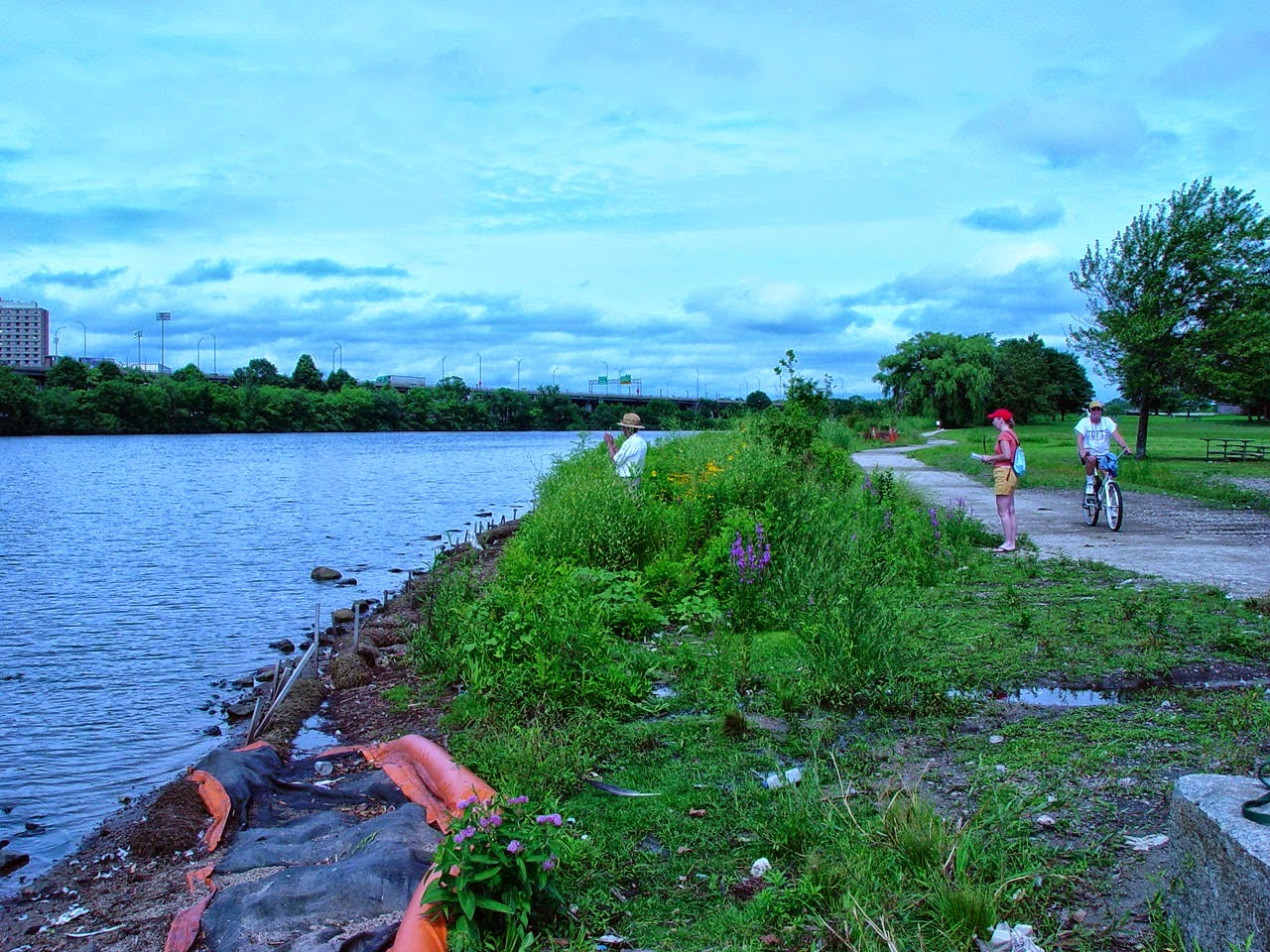 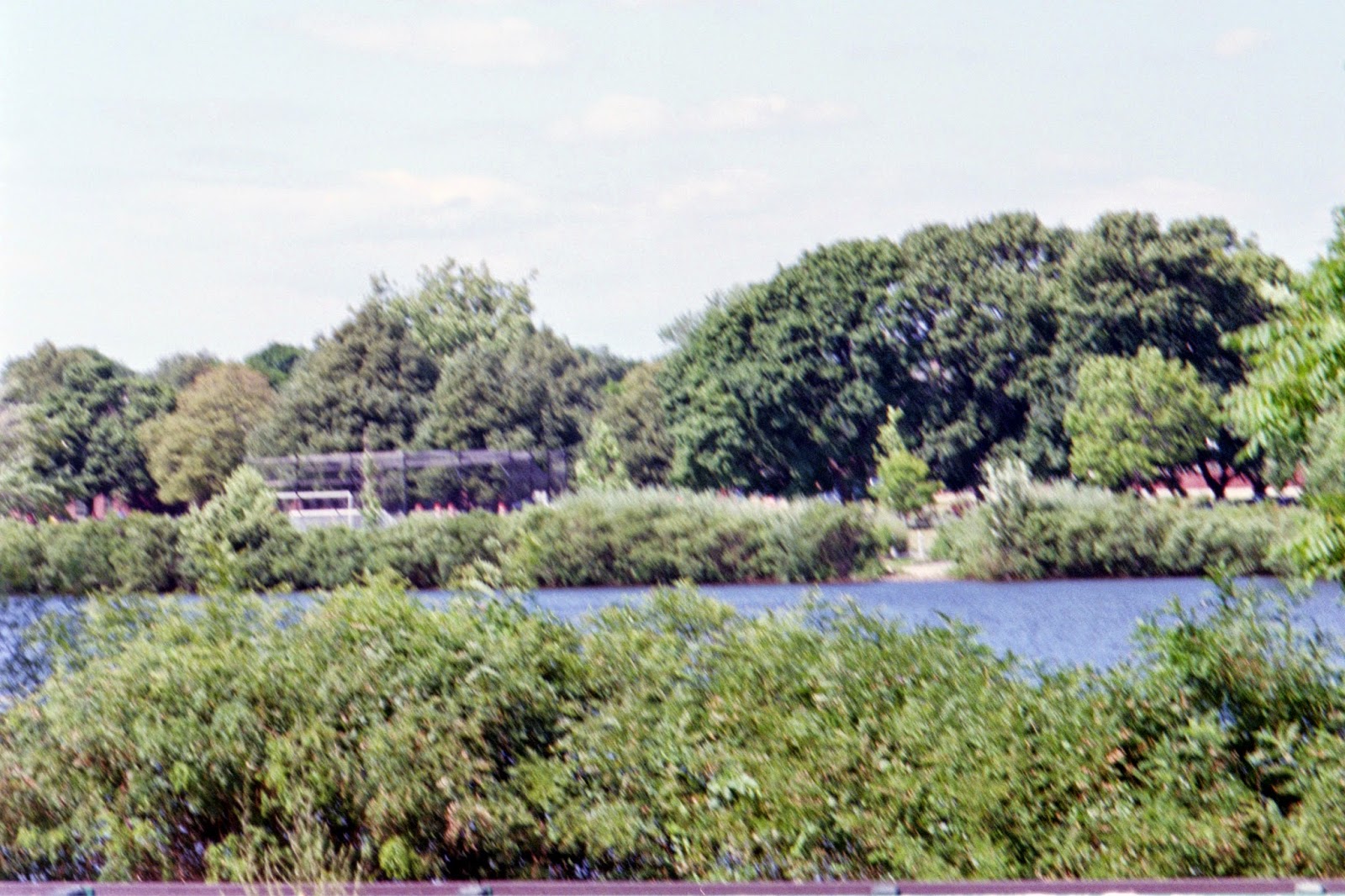 That wall of vegetation has never been explained except for a guarantee in the Bible of the bureaucrats that their goal for the Magazine Beach playing fields is a lawn to the river, and non stop lies by the key bureaucrat that he has no intention to harm the Charles River White Geese.  He, apparently, has redefined “harm” as other than deliberate starvation.

At Alewife, they were more blunt.  They simply destroyed acres of virgin woods killing animals whose families lived there for centuries if they could not get out of the way.

Cambridge has an explanation:

YELL AT THE OTHER GUY.

The most important difference between General Motors and the reprehensible City of Cambridge is that General Motors now seems to have responsible management.

Posted by Friends of the White Geese at 9:50 AM