Follow up on Charles River White Goose Bert and his adventures on Sunday, City Council Recommendation

Bert was on Agassiz at 6 am. My neighbors and I tried to make him comfortable on our entry stairway until we could get help from Animal Control or the Animal Rescue League of Boston. (Sadly, we didn't know about your organization or about the ongoing battle for habitat of these white geese.) I accidentally spooked him at 10 am when I went out to check on him and that's when he went down the hill, down Hurlbut, and, apparently, across Mass Ave. I'm so grateful to the people over there for knowing how to contact you and help him.

Thank you for the follow on and for your great help to Bert.

Clearly, crossing Massachusetts Avenue would have been a very frightening and dangerous experience.

For the information of those not expert on Cambridge, MA, Agassiz Street is about two streets west of Massachusetts Avenue and the park where Bert wound up, which in turn is about half way between Harvard and Porter Square, closer to Porter. It is a beautification of an air duct from the Red Line.

I do not have that photo and do not know Diana. I'd love to see it as well. BTW, he had some blood traces on his feathers, mostly on his chest, and one red spot on his side that may have been a puncture wound. Would it have been possible for a hawk to carry him all the way over here from the BU bridge area?

This is so nice. It looks like quite a few people were involved in helping out this fine Emden Goose.

Clearly, from what you have told me, he does not seem that badly hurt.

The trauma involved in leaving the Charles River again would far exceed any value of having him see a vet.

We had one goose who was stabbed in the side when Bumpy, the leader of the gaggle was killed. She had one leg useless because of the injury. She hopped around for five months on that one leg, healed and eventually returned to normal walking and being not identifiable from the rest of the gaggle.

If they could not get away with their lies, they would not do the terrible things they do.

Are there any candidates in tomorrow's election that you can confidently endorse?

The situation in the city council race is so bad that the Cambridge Chronicle condemned pretty much the lot of them, incumbents and challengers, and then made the absolutely minimal number of endorsements possible.

The heartless environmental destruction and animal abuse is inextricably linked to “reprehensible” treatment (to quote the Superior Court judge) of one city employee in retaliation for her filing a civil rights complaint. The jury awarded $3.5 million penal damages in addition to $1.1 million real damages. The appeals court expressed its disgust at Cambridge’s appeal by refusing to issue a formal opinion and then speaking of “ample evidence [of] outrageous actions.”

The sickness is all one big problem.

The judges and jury clearly were sending a message: fire the city manager without his golden parachute and possibly without his pension.

Almost all the candidates did not want to hear the message.

The only candidate I know of who would fire the Cambridge City Manager because of the destruction of the life of Malvina Monteiro is Jamake Pascual.

I recommend bulleting for Jamake Pascual to send a very clear message, the more the merrier.
Posted by Friends of the White Geese at 12:28 PM 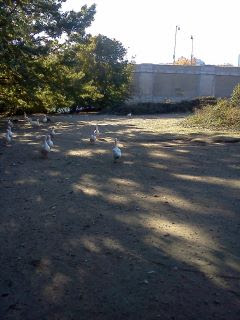