Large Alewife Parking Lot Returned to Nature; self-proclaimed “Friends” doesn’t want to know who did it

1. The parking lot at AD Little, in the Alewife reservation.
2. The zoning change which saved the parking lot in the Context of the fake groups.
A. Response of the “Friends of Alewife Reservation” to Sheila Cook’s rezoning the parking lot for open space.
B. The General Context.
C. Groups related to the “Friends of the Alewife Reservation.”
(1). The “Cambridgeport Neighborhood Association.”
(2). The “Mid Cambridge Neighborhood Association.”
(3). Other fake groups.
D. Psychobabble.
(1). General.
(2). It is impolite to accurately call destruction destruction.
(3). You can’t win. You can’t win. But have we got a deal for you.
(4). Trust the city manager (and city council).
(5). “Lie.”
(6). The environment of our world can be saved. On the Charles River and elsewhere near Cambridge, MA, USA, it is crucial, as part of saving our world, to beat the Cambridge Machine, the Cambridge Pols.


1. The parking lot at AD Little, in the Alewife reservation.

Decades ago, a think tank type entity, Arthur D. Little, built a complex on Route 2 near that highway’s eastern end in Cambridge. Route 2 is one of two main east-west limited access highways in Massachusetts. As part of this complex, A.D. Little got permission from Massachusetts to rent part of the Alewife reservation to use as its parking lot. The parking lot is a few hundred feet from Alewife Station, the northern / western terminus of the MBTA’s Red Line.

In 2000, Sheila Cook led a successful downzoning which limited development of that parking lot to open space zoning. I wrote the downzoning and advised her on the law.

These photos present different views of the former parking lot. It has been decommissioned during the last six years.
The free standing trees used to be on traffic islands in the parking lot. The pathway visible in the second photo connects the complex to Alewife Station. The white entity to the right in that second photo appears to be the office facility for the destruction of the Alewife Reservation.

The third photo shows the Alewife Station end of that pathway. The area behind it is pretty untouched The fourth photo also shows the former parking lot with the pathway showing in its left side.

The largest trees in these photos are smaller than the most obvious trees being destroyed in the planned clear cutting at the Alewife reservation. 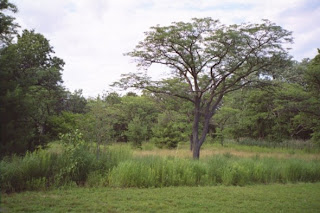 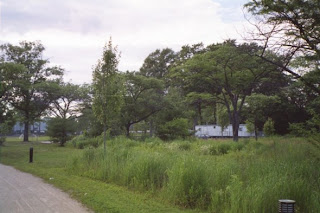 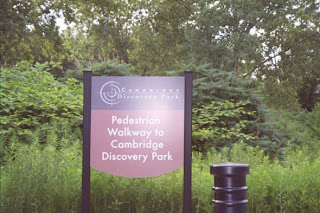 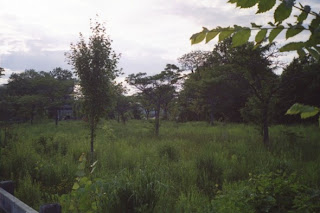 2. The zoning change which saved the parking lot in the Context of the fake groups.

A. Response of the “Friends of Alewife Reservation” to Sheila Cook’s rezoning the parking lot for open space.

When a developer announced his intention to obey the zoning and redevelop the parking lot as open space, the “Friends of Alewife Reservation” held a celebration/

They had a whole bunch of people they honored.

Not honored were the key people in the downzoning, Sheila Cook and me.

During the 15 year or so period, Sheila Cook and I have the only meaningful environmental victory at Alewife that I am aware of.

And the fake group called a party to celebrate our victory. But the party did not mention us.

And they have treated Sheila Cook like crap in response to her victory.

In the meantime, they have fought for the destruction of the core reservation BY THEIR FRIENDS while repeatedly telling well meaning people to look at everything else. Don’t look at the massive, key destruction which is totally avoidable. Chase your tails. Look at the other guy. Look at the much more difficult stuff, much less important stuff, to prevent destruction.

B. The General Context.

I have written more successful zoning changes in Cambridge, MA than any other person not employed by the City of Cambridge. I emphasized environmental protection in my changes, with a strong preference for ground floor open space and for housing in a city with too much traffic and about twice the jobs appropriate for its population. My zoning changes have always done what I have said they were doing.

The Cambridge Pols with their fake groups have fronted for a lot of zoning initiatives written by the Cambridge City Manager’s people. What was done on Memorial Drive is not at all unusual. Zoning protections were destroyed on the north side of Memorial Drive as the result of a zoning petition which was loudly trumpeted as exactly the opposite. It was written the by City Manager’s people and fronted by well established Cambridge pols.

The one reaction from me which is altogether too consistent when dealing with the Cambridge Pols and their supposedly separate groups has to be: “You can’t possibly be so stupid.”

But this clearly interconnected group keeps running around, making lovely statements and achieving altogether too often the exact opposite. They clearly are associated with each other, to the City Manager’s operation and to City Councilors to a varying degree.

It is impossible to discern, for the most part, who is really pulling the strings. The reality, however, is that they behave in such a manner that whether a particular individual is a knave or fool is irrelevant. They are belligerent and too often they blindly fight for causes with indifference to reality. The Cambridge Pols altogether too often, destroy what they claim to be defending.

C. Groups related to the “Friends of the Alewife Reservation.”

In these reports, I have gone into comments on the supposed “Cambridgeport Neighborhood Association.” This group’s representatives are downright belligerent about enforcing a self-imposed limitation which prohibits the group or anybody talking to the group from meaningfully defending the neighborhood.

Excellent examples of their positive statements are the destruction of the environment of the Charles River which they “celebrated” after censoring negative comments. Also of importance is the destruction of zoning across from Magazine Beach through a falsely described zoning petition. If you are faced with flat out falsehoods and you are prohibited from calling falsehoods falsehoods, what happens?

Reality is that they are belligerently lying about being a neighborhood association. Just another con game.

I have previously reported on very tiny portion of the destructive behavior of this group and key people. They are way beyond the scope of these reports. My reports were on my victories in rather clearly the most pivotal part of Cambridge.

I certainly have had very major victories at the expense of the Cambridge Pols in the “Mid-Cambridge Neighborhood Association.” I have outorganized them and I have beat them. But they keep coming back and they have done very major, avoidable damage.

“You can’t possibly be so stupid” is very much of an understatement.

I could keep on going. Two further examples.

The falsely named “Harvard Square Defense Fund,” for one is an easy target. I brushed on them in my reports on the Mass. Ave. zoning.

The falsely named “Charles River Conservancy” has gotten a lot of time in these reports.

The destructiveness of the “Friends of the Alewife Reservation” is by no means unique in Cambridge, MA.

Where are these groups coming from?

Well, it is very much impossible to psychoanalyze each and every individual. The only practical aspect is to look at the destructive movement as a whole and to make educated analysis.

One reality is that a very significant percentage of Cambridge residents make their living from development. I have seen a report which, rather incredibly, says that 14% of Cambridge residents are architects. Architects make their living from environmental destruction. Their game is “getting things done” and the tougher the fight is, the greater the respect for them from their associates.

Similarly, there is a tradition of blackballing in the development industry. If you meaningfully stand up against a project, no matter how irresponsible, you can have your work possibilities disappear.

Similarly, there are people who want to please the City Manager because of the benefits possible there.

There are people who are loyal to Cambridge’s extremely bad city councilors.

These are well meaning people who are conned by a massive, lying organization.

And a lot of the people who look like knaves are, in reality, victims, fools.

This is a highly stupid position. This is the position which the fake Cambridgeport Neighborhood Association claims to live by, using different terms, of course. And proclaims itself a fake organization in the process.

This is also a very common position from the Cambridge Pols.

This is the loudest proclamation.

Sheila Cook, with my assistance, proved this proclamation a lie at Alewife.

So the Cambridge Pols claimed she (and I) did not exist. And they treated a hero, Sheila Cook, like crap.

They celebrated the return of that parking lot to nature by ignoring the people most responsible for it.

The Cambridge Pols claimed Sheila Cook (and I) did not exist. And they treated a hero, Sheila Cook, like crap.

They lie behind that is exposed when you look at the very many successes (including the Alewife parking lot) I have had. The Cambridge Pols, the machine does not care. They just keep on lying.

Riohie MacKinnon, the developer of the project which included that parking lot conversion, stated to me at the celebration that he did the conversion because of the zoning requiring that the parking lot be returned to nature.

The fraudulent destruction of zoning on the north side of Memorial Drive in a petition whose fine print belied the lovely words used to describe the change when it was proposed was anything but unusual.

The Cambridge Pols say the city manager’s people can be trusted. They lie.

And that is a very crucial lie.

I keep using this word in talking about falsehoods bandied about by the Cambridge Pols.

The people spouting these falsehoods are communicating two things. They are making two very basic affirmations.

First, they are communicating that the statement is true.

Secondly, they are communicating that they know what they are talking about.

Now, if they are running around spouting falsehoods, one of these basic affirmations has to be false.

(6). The environment of our world can be saved. On the Charles River and elsewhere near Cambridge, MA, USA, it is crucial, as part of saving our world, to beat the Cambridge Machine, the Cambridge Pols.
Posted by Friends of the White Geese at 3:11 PM