What the Boston Globe does not see or does not want to see.

We have recently published Archie Mazmanian’s response to a Boston Globe editorial supporting passenger use on the Grand Junction, at http://charlesriverwhitegeeseblog.blogspot.com/2011/07/little-bridge-that-could-response-to.html.

The Boston Globe’s description of the Grand Junction in that editorial stands out:

the Grand Junction railroad, a little-used but strategically located 3-mile rail line that connects Allston and Cambridge via a graffiti-covered trestle underneath the BU bridge

Here is a photo of what the Boston Globe does not know or does not want to know, described as “a graffiti-covered tresle underneath the BU Bridge.” 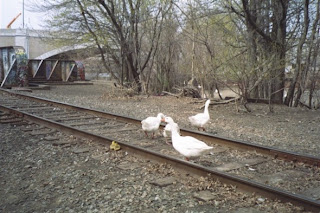 This photo was taken in April. To the left, you can see the Cambridge end of the railroad bridge. In the middle are clearly visible four of the Charles River White Geese crossing the Grand Junction railroad track.

Less visible are the tiny yellow shapes with some black on the top, to the left of the adults, pushed up against the left portion of the track. These are two tiny, perhaps, a day old babies of the Charles River White Geese.

To the right is the destruction which was their Nesting Area for most of the last 30 years. To the left and out of view is a steep incline between the track and the river. I would anticipate the nest in which these babies hatched is somewhere on that incline. These little guys look too small to get over the track, but, in order to nest, the parents have had to go on the wrong side of the tracks to have their babies.

This is what the Boston Globe does not want to know. This is where the Boston Globe wants to run passenger trains, on a route inferior to the current route from a transportation point of view, on a route where Cambridge and the state bureaucrats are doing the best they can to kill off all resident animals.

This particular technique is a silly passenger train route.

And the Globe does not, apparently, want to know reality.

I have further recent photos of this area which I will post in the next few days.

ADDENDUM: The area to the immediate right has been lush with vegetation for most of the last 30 years, but the state, Cambridge, and the Charles River Conservancy are destroying nature. The devastation you see has been CREATED since the CRC started doing the state’s environmental dirty work.
Posted by Friends of the White Geese at 5:36 PM