The lack of ethics of the Cambridge Machine is so extreme that it is silly to call the situation anything other than corruption.

The Cambridge Machine is fighting to destroy the picnic area on Magazine Beach at the foot of Magazine Street by destroying its parking. The Cambridge Machine is fighting to accelerate the heartless abuse of the Charles River White Geese by replacing the area where they have nested for most of the past thirty years with an impenetrable thicket comparable to the bizarre wall they have installed between Magazine Beach and the Charles River.

The Cambridge Machine is following its standard tactics: lie about which side they are on and rein in well meaning people. They tell the well intended people to look at everything except what counts, and they destroy what they claim to value.

I have repeatedly gone through the tactics both on the outrages on the Charles River and at Alewife.

The Machine has created a fake blog which they named after Magazine Beach, lying that they are concerned about Magazine Beach and want to improve it. Since they do not want to know about the biggest problems at Magazine Beach because their friends have created those problems, the claims of concern are flat out lies.

The below photo is copied without permission under the fair use doctrine from this fraudulent website. I have obscured the face to protect a very certainly well meaning person. He clearly loves the area. The person is just another victim of a Cambridge Machine without shame. 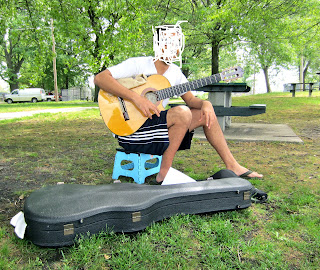 I caught this picture on line at about 4:45 pm on Tuesday afternoon, June 5, 2012, working the Internet in Central Square, Cambridge, MA, USA. The machine has it posted at the top of its belligerently misleading “Magazine Beach” blog. By about 5:15 pm, I was sitting at the picnic table you see, making very certain the photo was of what I thought it was.

The ONLY time I have ever seen the Machine publicly state that it is fighting to destroying the parking lot was when the head of the falsely named Cambridgeport “Neighborhood Association” indignantly denied keeping it secret.

Destroying its parking is antithetical to flaunting this photo.

The corruption of these people in the use of this photograph to communicate exactly the opposite of their real intentions is corruption par excellence.

The corruption of these people in using this person who clearly loves this area to destroy this area is corruption par excellence.
Posted by Friends of the White Geese at 5:03 AM