Charles River: Which is more destructive, Governor Patrick or the Blizzard of 2013? Day 409.

Governor Patrick has authorized seeking of bond money for the destruction of hundreds of trees on the Charles River between the BU and Longfellow Bridges and for further abuse of the Charles River White Geese.

In an action showing similar contempt for the environment and its animals, he has had outrageously irresponsible railroad workers destroying the most sensitive part of the Nesting Area of the Charles River White Geese by using it for parking.

Before Governor Patrick started overruling the responsible people at the Department of Transportation, MassDOT spent years working on the adjacent BU Bridge. The workers parked under Memorial Drive and had their office under Memorial Drive. The distance from work to parking was greater for most of the BU Bridge work than it is for the railroad workers who are destroying the Nesting Area with their cars rather than parking under Memorial Drive.

We communicated this outrage to Patrick and were acknowledged by a reply of indifference.

In Governor Patrick’s seeking of bonds for destruction of hundreds of trees on the Charles River, he is overruling a study done by a joint committee of MassDOT and the Department of Conservation and Recreation. DCR’s behavior on joint efforts with the City of Cambridge has been notable for outrageous environmental destruction and heartless animal abuse / killing combined with a pattern of flat out lies and lies of omission. The DCR’s long record says that the DCR has no ethics. My opinion of that report was that decent humans shamed a department without decency into a responsible decision.

I have posted the letter by which I snail mailed the tree destruction plans to Governor Patrick.

Given the record of the people he is dealing with, outright lies and lies of omission should be expected from the DCR to Patrick. Nevertheless, it is illuminating to see the return of the railroad workers to the nesting area of the Charles River White Geese.

The DCR’s goals for the Charles River Basin include killing off all resident animals, buried, of course in fine print and a secret definition. The DCR warps all actions on the Charles River it can get away with into killing off or abusing all animals which get in its way. At Alewife, Cambridge and the DCR are accomplishing a totally unnecessary mass destruction of acres of virgin woods together with mass animal killings.

During my visit on March 24, I took a number of photographs and conducted the 409th day of visibilities at the Destroyed Nesting Area of the Charles River White Geese.

I was at the Destroyed Nesting Area shortly after the Blizzard of 2013. Here are some photos. 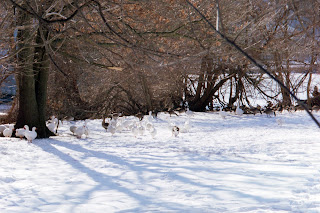 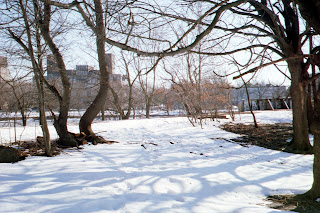 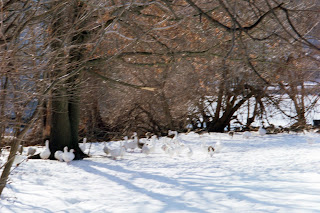 3. The results of the latest outrage.

On December 12, 2012, the railroad workers first started attacking the most sensitive part of the Destroyed Nesting Area of the Charles River White Geese, that small part of their former mile long habitat which has not been destroyed to these 32 year, very popular, very valuable, residents of the Charles River.

I first published photos of the outrage at http://charlesriverwhitegeeseblog.blogspot.com/2012/12/nesting-are-of-charles-river-white.html.

Please compare the photos below to the blizzard photos. Notice the location of the portapotties and of the metal building. These are the most sensitive areas of the Nesting Area and the areas most beloved to the Charles River White Geese. The metal building is a workshop, a very loud workshop. This was a Sunday. That workshop was very loud.

There was one portapotty the first time, at the far end of the nesting area in a clearly developed location, very close to where the workers should be parking.

Look, once again, at the photo of the truck leaving the Destroyed Nesting Area. The red structure in the background is Memorial Drive. Before Patrick started overruling the responsible people at MassDOT, MassDOT workers on the BU Bridge parked under Memorial Drive. This photo is taken from the BU Bridge. The wall protecting pedestrians is straight ahead on the left. The spot I am photographing from was a work site. It is not any further from Memorial Drive than is the work location for the railroad workers. And the BU Bridge workers had many further spots from which they worked.

The portapotty the first time was next to this wall.

And geese are trying to nest next to this racket.

But Governor Patrick is overruling responsible people at MassDOT.

Compare these photos to the photos from the Blizzard of 2013. The location of the geese after the Blizzard is their favorite, most sensitive spot, under the big tree, exactly where the outrage is centered. The first two photos are from March 18, 2013, when they had just returned. The six following are from March 24, 2013. 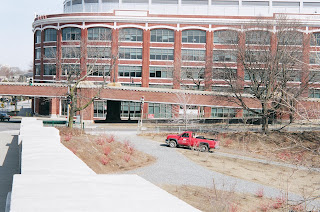 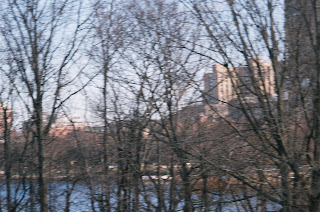 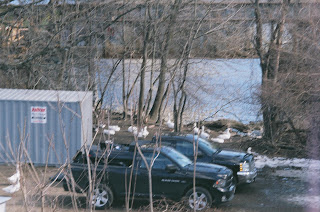 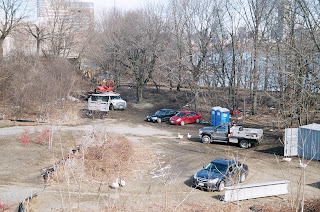 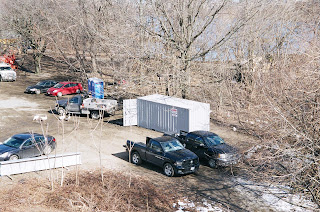 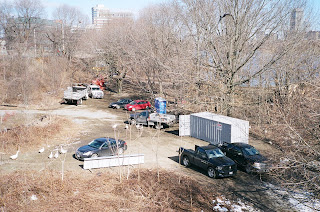 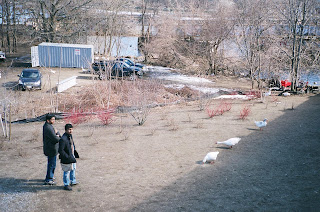 The people in the last photo are outraged civilians. They are standing near the wall shown in the first picture of this group of photos. They are quite a bit closer to where the workers should be parking and should be doing their work than they are to the outrage, which is in the background. They are quite close to the former location of the one portapotty during the first outrage from Governor Patrick’s workers.

4. Communication to the governor.

I sent a link to this post to Governor Patrick at http://www.mass.gov/governor/constituentservices/contact/ the following message:

I have provided you by snail mail the DCR’s plans for the destruction of the hundreds of trees you are seeking bonds to destroy on the Charles River.

I have posted at http://charlesriverwhitegeeseblog.blogspot.com/2012/12/nesting-are-of-charles-river-white.html photos of your latest outrage.
Posted by Friends of the White Geese at 2:14 PM