Day 373, The Goose Meadow before Governor Patrick's Heartless Animal Abuse, What should be done

I have been able to find two pictures in electronic form of the Goose Meadow this year. They were photographed in the first two weeks of July.

The first view is of the location of the two demolition vehicles. This is the area the gaggle immediately inspected once they realized the immediate danger was gone. They used a lot of it for nesting. The portion not destroyed had had significant damage in the last two years by the DCR. The destruction of this area is totally without value. It is being done for staging that should be put under Memorial Drive. 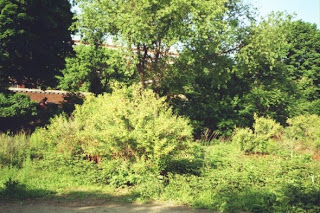 The second is of the area toward the BU Bridge, looking toward the trees.

The project has been timed to maximize environmental destruction and animal harm. The timing should be changed to do exactly the opposite.

If we were dealing with other than heartless animal abusers, the Charles River White Geese would be allowed to return to their home for most of the last 30 years, Magazine Beach and to visit the nesting area as they deem fit.

Half the destruction is unnecessary and dumb. The destruction in the north part of the goose meadow is for staging that should be placed under Memorial Drive, but we are dealing with very destructive people.
Posted by Friends of the White Geese at 1:58 PM