1. Little Brook’s Visit, Feeding Record, State Meeting.
A. Introductory.
B. Little Brook visits.
C. Follow ups to Little Brook.
D. State response.
2. Machine Pontificates.
A. The Fault of the Voters.
B. Too Late.
(1) Pending destruction of hundreds of healthy trees which has not occurred yet.
(2) Toss on responsible grass seed instead of poisons.
(3) Treat the introduced wall of bushes like all other vegetation bounding the Charles River.
(4) Fill in the poison drainage system.
(5) Kill the proposed restrictions on use.
3. Machine to do more harm Wednesday night?

A few weeks ago, Friends of the White Geese met with the manager of the BU Bridge repairs at the destroyed nesting area of the Charles River White Geese.

We invited a number of people who have been involved with and concerned for the Charles River White Geese.

The most beloved participant was Native American Reen LittleBrook.

Little Brook was the best friend of the Charles River White Geese from about 1996 to summer 2004.

In summer 2004, Little Brook got a bicycle. The next day, he wound up in a very severe collision. He is very lucky to be alive. After major rehabilitation, he still feels the effects of the collision.

During those eight years, Little Brook gathered bread and other food from many good people and got it to the geese.

Little Brook cared for their injuries and infirmities using his knowledge of practical medicines and animal care.

Two photos of his visit are included in this report. One photo of the view of the construction from where he was feeding is also attached.

That summer Marilyn Wellons and others took over, as much as they could, Little Brook’s responsibilities.

Then on September 24, 2004, Cambridge and the state heartlessly began to starve the Charles River White Geese. Just when the geese were at Magazine Beach, their primary feeding grounds, from dawn to dusk to get ready for winter, the City of Cambridge and the DCR began a project to keep the geese permanently from the grass there. First the construction barriers went up. The geese were frantic when they discovered they couldn't get ashore. 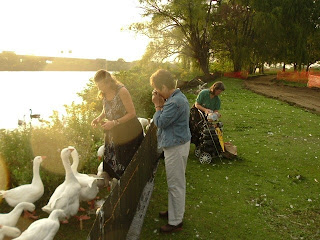 All their food was taken away from them. The construction barriers remained for years. Since they came down the permanent barrier of plants has kept the White Geese from Magazine Beach.

This heartlessness drove home to us just how minimal the feeding we had been giving to the Charles River White Geese was compared to the bulk of their diet, grass along the riverfront.

Marilyn did some research and determined a proper diet. She went to farm supply stores and found the needed greens and other food, and bought it.

Friends of the White Geese worked to create a separate organization, the Charles River Urban Wilds Initiative, Inc. That organization feeds the geese and has allowed people to contribute with tax benefits.

A number of local merchants have been kind enough to provide expired food which can no longer be sold to humans. The Charles River White Geese and the other waterfowl are not so fussy they love it.

The Charles River Urban Wilds Initiative, Inc. has done a heroic job, faithfully keeping the Charles River White Geese alive. The destructive project at Magazine Beach feeds planners and contractors even as it has starved the geese.

This exchange was several weeks ago. I have not publicly mentioned it in this forum because I appreciate the courtesy of the visit in spite of its lack of accomplishment.

I gave the gentleman a list of needs. He pretty much responded that the problems were created by the DCR and he was not able to do much.

We frequently do visibilities at many events to communicate to decent people the lies routinely tossed out by the Cambridge Machine.

At one of these events, a very good worker spoke with Craig Kelley.

Kelley is a Cambridge City Councilor. He has run as an environmentalist. Kelley has a strikingly bad record on the real environmental issues. He brags about fancy light bulbs and somehow just cannot notice the repeated destruction of the REAL environment being done on his watch.

Kelley gave two basic explanations for the outrage on the Charles River. First, it is the fault of the voters. Secondly, it is too late.

A. The Fault of the Voters.

(1) Pending destruction of hundreds of healthy trees which has not occurred yet.

Apparently, as far as Kelley is concerned, the promised destruction of hundreds of trees and animal habitat between the BU Bridge and the Longfellow Bridge cannot be prevented because it is too late. Last time I checked, those trees were still there. Kelley says it is too late to prevent their destruction.

(2) Toss on responsible grass seed instead of poisons.

Apparently, as far as Kelley is concerned, the destruction of the GREEN maintained grass at Magazine Beach and the introduction of sickly stuff which requires poisons to stay alive is also a fait accompli.

Strange. It does not strike me at all difficult to simply stop tossing on poisons and toss on responsible grass seed instead. Somehow, it is too late to behave in a responsible manner once grossly irresponsible behavior has been inflicted.

I find that incredible. Replacement of the introduced sickly grass in that manner would likely save money.

(3) Treat the introduced wall of bushes like all other vegetation bounding the Charles River.

The contractor welfare at Magazine Beach has been severely delayed because, after they destroyed healthy native vegetation, the introduced stuff would not live. The stuff they destroyed has routinely been destroyed on the Boston side by the state and Boston has severely criticized the state for it. Boston is concerned about migrating waterfowl and about the native vegetation. Cambridge simply destroys and brags about fancy buildings.

This introduced stuff which was not fit to live on the Charles finally took hold and has not been cut since. The state’s project manager has bragged that it starves the Charles River White Geese. It seems to have no other purpose.

While this introduced stuff is growing unchecked and starving the native animal population, the state twice a year destroys all the protective vegetation abutting the Charles.

And this starvation wall is extremely harmful to the native animal population.

But Councilor Kelley brags of his fancy light bulbs.

(4) Fill in the poison drainage system.

Cambridge has spent a bunch of money creating a drainage pit system to drain off the poisons that they should not be dumping on the banks of the Charles. The drainage pits cannot possibly handle the worst of the storms.

Encouragingly, the Cambridge City Council claims to be in support of open space. Returning these pits to open space use is an obvious correction for a poison drainage system which is unnecessary if you do not dump poisons.

Presumably, Mr. Kelley believes me when I call the bunch of them liars.

(5) Kill the proposed restrictions on use.

Cambridge proposes to prohibit the public from using this area which has been in public use for the better part of a century. If you even want to toss a frisbee, you have to register in advance and pay $90.

EVEN IF THE FIELD IS NOT BEING USED.

Restrictions like this have been enforced by the police at Russell Field near Alewife Station.

Obviously Mr. Kelley agrees with my opinion as to the extreme irresponsibility of the Cambridge City Government.

It is too late according to Mr. Kelley. Cambridge cannot possibly behave as a decent city government like the City of Boston. THAT IS THE WAY THINGS ARE DONE IN CAMBRIDGE.

That position strikes me as irresponsible.

There is a group with connections to the Cambridge City Manager which claims to be a neighborhood association.

It is meeting Wednesday evening, February 23, at 7 pm for an annual meeting with a discussion of “improvements” for the Charles River coming at 7:30 pm or 8 pm.

The leader of this organization was present at a meeting of City Manager appointees a few weeks ago to discuss the introduced vegetation which seems to have no use except starving the animals. The groups enforced a three minute talking limit on people concerned about the environment. He spent what seemed like ten minutes patting his organization on the back. He never did discuss the introduced vegetation.

This meeting will be conducted in the basement of Woodrow Wilson Court, a housing project on Magazine Street in Cambridge southwest of Dana Park. The entrance used is on Fairmont Street.

Councilor Kelley has been communicating on this matter and employees of the Cambridge City Manager will be there.

It is quite certain that these self-proclaimed defenders of the environment will continue to not understand why destroying the environment and heartless animal abuse is not nice.
Posted by Friends of the White Geese at 4:48 PM